How Rice Farming May Have Spread Across the Ancient World

Hunter-gatherers didn’t learn farming themselves, or from their immediate neighbors, but rather from distant people moving into their territory—a pattern that may have played out throughout this part of the globe. 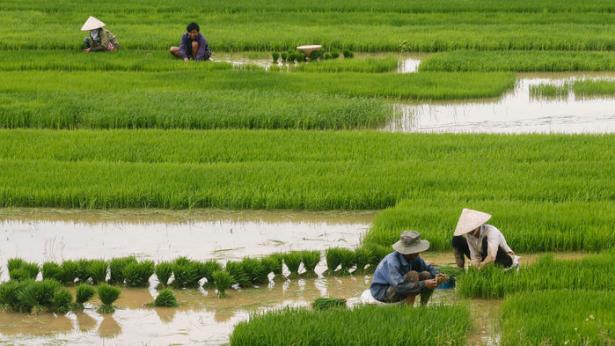 Rice farming spread far and wide in ancient Southeast Asia, but how it got there has been a mystery. Now, a study of 4000-year-old DNA—a rare find in this region—suggests it came with farmers migrating from China, where rice farming originated. That means the hunter-gatherers already living there didn’t learn farming themselves, or from their immediate neighbors, but rather from distant people moving into their territory—a pattern that may have played out throughout this part of the globe.

The study sheds light on “a pivotal period in social and ecological history,” says Hsiao-chun Hung, an archaeologist at Australian National University in Canberra who researches the spread of farming in Southeast Asia and wasn’t involved in the new work.

Scientists have struggled to peer into the prehistory of Southeast Asia because the region’s hot, humid climate tends to degrade DNA. But David Reich, a population geneticist at Harvard University, and Ron Pinhasi, a physical anthropologist at University of Vienna, gave it a go anyway.

Pinhasi worked with archaeologists who had excavated 146 skeletons from ancient people who lived in Southeast Asia. The team then used state-of-the-art genetic sampling and sequencing techniques to recover DNA from these remains. Only 18 individuals gave up their genetic story, but that was enough to open a new window onto the past. They lived in Vietnam, Myanmar, Thailand, and Cambodia between 4100 and 1700 years ago, a period ranging from the beginning of agriculture in Southeast Asia all the way through the region’s Iron Age.

The oldest skeletons come from the site of Man Bac in northern Vietnam, where archaeologists have unearthed artifacts including decorated pottery and intricate jade ornaments that are very similar to those found at earlier rice farming sites in China. Archaeologists have long believed that indigenous hunter-gatherers and newly arrived rice and millet farmers lived together at Man Bac. And indeed, the genomes of the site’s residents confirmed that idea. They showed a mixture of two ancestries: one indigenous to the region and the other more related to people from southern China. That confirms that farmers had moved to Man Bac, spread their technology and culture, and mixed with the local population of hunter-gatherers, the team reports today in Science.

Those early farmers may have left another legacy: a language that developed into today’s Austroasiatic family of languages, which are scattered across Southeast Asia. The genomes of people who speak those languages today—among them Khmer in Cambodia, Nicobarese on India’s Nicobar Islands, and Mlabri on the border of Thailand and Laos—show the same mix of ancestries found at Man Bac. That suggests the early farmers spread their genes and culture all across the region, Reich says.

In later sites from Vietnam, Cambodia, Myanmar, and Thailand, the researchers found a signal of another wave of migration from southern China about 2000 years ago. They were farmers as well, and this time they probably brought bronze metalworking technology, kicking off the Bronze Age in the region. With this migration, the populations of Southeast Asia began to resemble the people living in the region today.

This three-pronged mixture of indigenous hunter-gatherers, early farmers, and a later wave of migrants parallels the prehistory of Europe, also illuminated by ancient DNA in recent years. There, migrating farmers brought agriculture from the Near East to Europe, where they mixed with local hunter-gatherers about 7000 years ago. Then later waves of Bronze Age migrants—in Europe’s case, herders from the Central Asian steppe—moved in and established the population structure scientists see today. (Researchers, including Reich, have also documented a similar pattern in South Asia.)

“The two are twin phenomena happening at about the same time at different ends of Eurasia,” says Charles Higham, an archaeologist who studies Southeast Asia at the University of Otago in Dunedin, New Zealand, and wasn’t involved in the work. “Human beings are inquisitive, they’re exploratory, and they’re on the move.”