This book shows how California recovered from the grim, racist 1990s by creating community and labor political coalitions that revitalized the state and put it on a problem-solving oriented, progressive path. 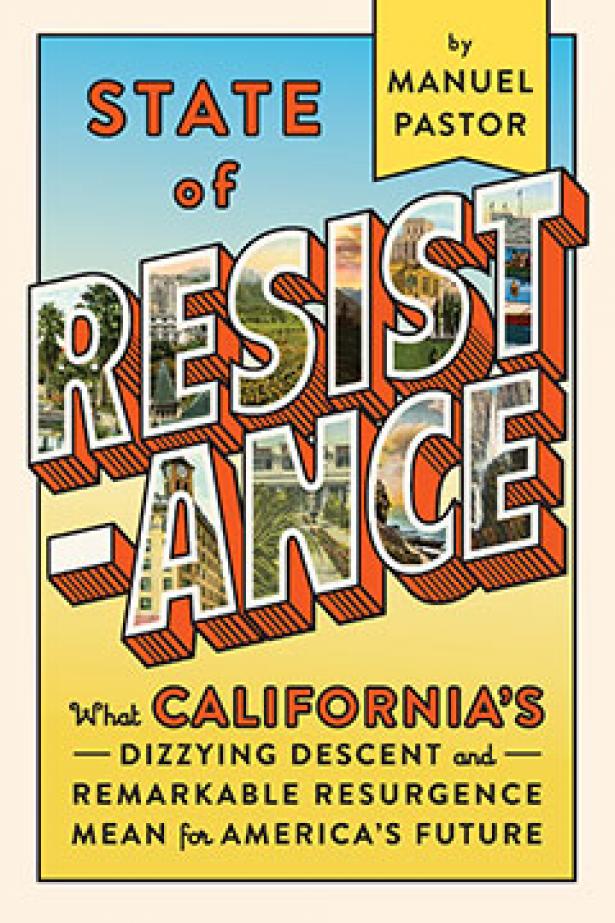 Fifty years ago, Joan Didion famously wrote that California is “a place in which a boom mentality and a sense of Chekhovian loss meet in uneasy suspension; in which the mind is troubled by some buried but ineradicable suspicion that things better work here, because here, under that immense bleached sky, is where we run out of continent.”

Today, the state still holds that place—part burden, part hope—in the national imagination. California is Hollywood, Silicon Valley, the Grapes of Wrath, paradise found and lost. And in the chaotic and despotic Trump era, California’s headline-making #Resistance politics seem to serve as just one more chapter in its romantic self-telling.

In Governor Jerry Brown’s own words, California is “at war” with the President of the United States. Brown, legendarily peripatetic but nothing if not politically savvy, was responding specifically to Attorney General Jeff Sessions’ lawsuits against the state for what Sessions deemed “radical extremist” attempts to protect undocumented immigrants.

But the war goes beyond immigration, with Trump pronouncing that the nation’s most populous and most prosperous state was “totally out of control.” Trump declared that Brown—who is now serving his fourth term in office; he also served 1975–1983—had done a “terrible job” and that California’s sanctuary cities teem with criminals. Trump also said the state has the highest taxes in the nation—actually, New York does, followed then by Connecticut, New Jersey and Illinois—and that “people are going to start to move pretty soon.” Brown responded by thanking the President for the shout-out.

It was political theater at its finest.

But California’s politics today are far more than just narrative romance or ego-boosting Twitter wars. As Manuel Pastor argues in his new book, State of Resistance: What California’s Dizzying Descent and Remarkable Resurgence Mean for America’s Future, the state’s battles have been hard-fought and its victories hard-won ever since Didion’s Slouching Towards Bethlehem.

Pastor, professor of sociology and American studies & ethnicity at the University of Southern California, is a long-time Californian. While many other political commentators have told California’s story as a tale of charismatic gubernatorial leadership, or of the technology giants’ economic wizardry and world domination, Pastor’s analysis is far more nuanced—and far more useful.

Most importantly, Pastor is the rare political observer who sees through the senselessness of the seemingly perennial question: “Does our country have an economic problem or a race problem?” Of course it is both.

Our economic policies are racial policies. Whether the issue is wages, health care, education, or policing, politicians take actions that either include or exclude people of all nationalities, ethnicities, and backgrounds through rules, laws, and day-to-day decisions. What really shapes outcomes, Pastor shows, is the larger social compact within which we make those rules.

Consider, for instance, my own family history. As a second-generation Californian and a child of 1970s Sunnyvale, I can attest to the central importance of the state’s compact and its beliefs about who belongs and who does not.

My parents were born in the United States shortly after their parents landed at Angel Island. They grew up in Oakland’s Chinatown and went to UC Berkeley for an incidental fee of $84 annually. They bought a tract house for $21,000 in 1961.

Pastor refers to stories such as mine as the California Dream of the 1950s and 1960s. That dream, Pastor says, emphasized a “commitment to create platforms of opportunity for both those who were already living in the Golden State and those who were still to come.”

In 1959, Governor Pat Brown (Jerry’s dad) signed a slew of bills during his first legislative session, all funded by the biggest tax increase the state had seen in years. The state invested in physical infrastructure such as the California Water Plan and the California Freeway System—both backbones of suburban growth—and, through the famed Master Plan for Higher Education, in the University of California, the California State University, and the community college system. This was a blanket commitment to the state’s young people: if you wanted a college education, you could get one.

California’s “dizzying descent” began in the late 1970s, however, when Howard Jarvis, the Last Angry Man, led a now-infamous white suburban tax revolt. Proposition 13 locked in low tax rates for homeowners who had already gotten theirs. The descent reached its nadir in the 1990s, when Californians and their leadership turned against immigrants and “the racism of [the state’s] own residents got the better of them.” By 1994, Governor Pete Wilson won re-election with a grainy 30-second ad showing “illegals” running across the southern border, the voice-over intoning “they just keep coming.”

In short order, voters approved the “racial propositions”: banning affirmative action; creating a three-strikes policy that required minimum twenty-five year sentences regardless of whether the third offense was violent; mandating that the justice system try to sentence 14-16 year olds (the “superpredator generation”) as adults; and perhaps most notorious, Prop 187, which banned health care and public education for undocumented immigrants and required that the state’s teachers, nurses, and doctors report those whom they suspected of illegal status.

Even to those of us who lived through them, California’s racialized 1990s feel distant today. So, too, do the economic and budget crises of the 2000s—driven in large part by Prop 13 and other limits on taxation and exacerbated by the implosion of the state’s debt-riddled housing market after the 2008 financial collapse.

Change can seem sudden—and inevitable—in retrospect, but today’s California is perhaps best represented by the joint statement issued the day after Trump’s election by State Senate President Kevin de Leon and State Assembly Chair Anthony Rendon: “We will not be dragged back into the past. We will lead the resistance to any effort to shred our social fabric or our Constitution.”

Leaders such as de Leon and Rendon, both from immigrant families, make plain the importance of demographic change in California—and may serve as a preview of the United States in 2050. In 1980, the state’s non-Hispanic white population was 67 percent. By 2000, that population dropped to 47 percent, and by the 2010s, leaders of color had come of age, drastically impacting local politics.

But as Pastor emphasizes, demography alone is not destiny. As environmental advocate Roger Kim points out: “Yes, demographic change can work in our favor but you have to do the hard work of investing in the infrastructure to make it so. . . . California doesn’t look like this by chance; there was an incredible amount of work that went in.”

Community and labor union organizers learned from the grim, racist 1990s to forge coalitions with politicians and with one another. This newfound political action came from all quarters: labor leaders such as Maria Elena Durazo, strategists such as Anthony Thigpenn, community organizations from the Koreatown Immigrant Workers Alliance (KIWA) and the Los Angeles Alliance for the New Economy (LAANE). Organizations pioneered a year-in, year-out approach to civic engagement that ensured that electoral, voting work met community organizing on equal footing. As Thigpenn has said, “There were no shortcuts. We just had to dig in and build institutions.”

Today, that work appears to be paying off. Over the last ten years, the state has moved away from its infamous sprawl and towards regional, diversified economic growth. Much of that growth is drastically uneven—when cost-of-living is combined with income levels, for instance, the state’s poverty rate is the highest in the nation. But the large number of low-wage jobs in retail and fast-food has led to a growing number of worker organizations focused on improving life for the “working poor,” from organizing port workers to fighting for a $15 per hour minimum wage to closing the commercial property tax loophole in Proposition 13.

Moreover, the recent wave of political action has meant reaching beyond the urban, coastal base. Following a “fishhook strategy,” (so-called because of the hook on the map, going inland from the coast to suburban and then rural parts of the state), a coalition of Democratic funders and advocates decided to invest long-term, building organizations in conservative strongholds such as San Diego, the Inland Empire of Riverside and San Bernardino, and Orange County.

Today, even the parts of inland and southern California once considered the most conservative—the parts of the state that were home to the Goldwater campaign, the John Birch Society, the evangelical Christian right, Richard Nixon, and Ronald Reagan—are now at the top of Democrats’ 2018 target list. Operatives are tracking more than a dozen California House districts that could flip from red to blue. The politics remain complicated, with plenty of conservative and religious pushback, but the state has fundamentally shifted and is actually doing what can seem impossible: integrating dramatic demographic change.

National leaders seeking to learn from California shouldn’t imagine that change was easy. Politics were—and are—still political. In the 1990s, Democratic officials and movement activists disagreed on how to respond to Prop 209’s attacks on affirmative action. Community-based environmental justice organizers continue to make peace with mainstream environmentalists, working to support a cap-and-trade policy that some view as still too market-based. And while all Californians today might agree on the state’s desperate need for more housing, the Silicon Valley pro-housing YIMBY coalition (“yes in my backyard”) and public housing advocates certainly disagree on whether private development or social housing should lead the way. Make no mistake: California is not utopia.

But the state’s politics have moved forward. In perhaps the biggest reversal of all, voters have rejected the state’s long history of anti-tax fervor. In 2012 Proposition 30, a tax increase on the wealthy to fund public education, won by 11 points. Jerry Brown received credit for the win and ensuing budgetary success, but as Pastor notes, the governor’s original instincts were far more moderate. He was pushed towards a winning, more progressive tax formula by a coalition of left-leaning organizations. By 2016, on the same night that Trump won the presidency, Californians voted to extend the higher tax rates on the wealthy.

It may well be that the damage we see to our institutions and to our collective trust is far worse under the Trump administration than it ever was in California’s bleakest days, but Pastor’s book, in many ways the culmination of a career studying the positive-sum relationships between economic growth and social equity, still offers pragmatic lessons for national politics.

Among them: offer up a compelling, practical economic vision; do not move to the middle, move the middle; fund for the long term; know that sometimes compromise—between business interests and activists, between the private-sector and those who want more public goods—is smart and necessary; and understand that speaking directly and strategically to identity interests can both mobilize supporters and claim the moral high ground so important in politics.

Most fundamental, however, is the larger social compact within which we make our rules and policies. California’s fortunes only rise when “Californians realize that what is at stake . . . is not just the size of the deficit or a specific set of policies but the outlines of a new social compact that includes everyone.”

California today is both majority people of color and the world’s fifth largest economy. The state’s resurgence shows that ordinary people can in fact change their basic political beliefs. More inclusion is pragmatic, possible, and in fact essential as we seek to make real the promise of our national democracy.