Bourdain engaged without fetishizing, touristed with ease, in the way of a person who’s been toggling between identities so long, the act of meeting a stranger from a strange land is the only familiar feeling. 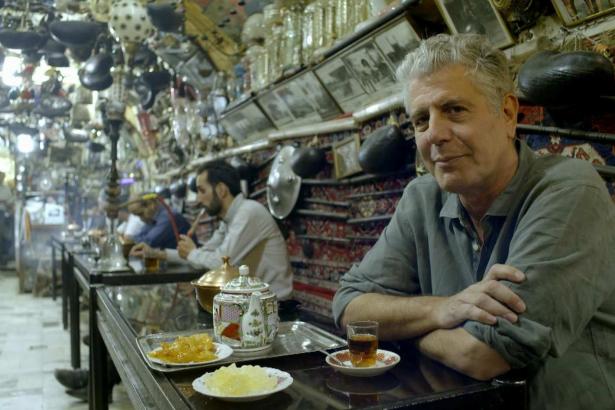 I recently invited friends from America to India and my family showed them the sort of food tour worthy of an Anthony Bourdain production, of the exterior but mostly the interior, to borrow an important distinction made in so many episodes of No Reservations and Parts Unknown, the late TV host’s most famous shows — whether he’s in Iran, or in Maine. Bourdain understood that real life plays out in the home, where people feel comfortable, and where secret recipes come to life. My aunts treated my friends to the same curtain-unveiling, feeding them Jain food and Madhvist food, idlis and chutneys and steamed root vegetables and pickles prepared over the course of hours by a team of household help. My friends were visiting royalty, as Bourdain clearly is in every household into which he steps, his hosts’ expressions shifting from the hope on the face of the person wired to feel misunderstood — that he approve — to a realization that he’s one of them, that they can chill out because he gets it. He’s not a royal, but a subject of the same tyrannical forces, great at wisecracking about them. With my friends, too, one aunt confessed that she felt relieved about her hosting abilities because these guests weren’t white. In America, their nonwhiteness isn’t always obvious — the one, with parents from Iran; the other, his mother from Malaysia — but to my aunt the code written in them was clear: told in their names, their noses, their coloring. “I just feel they get it,” my aunt said to me as we walked into the street a few paces ahead of them, her tone making me wonder if she’d ever said something similar about me, her American niece, though I feel as Indian as anyone else.

We all know what it is to feel not quite right wherever you are, to look one way and feel another, to be sized up by others based on split-second guesswork — and that was the magnetism of a Bourdain show, that he made the act of living at a time of mass interaction look easy. When Bourdain went to Rajasthan in 2006, I was just leaving college. I hadn’t invited my first white friend to India, didn’t even know a white person who’d been to the country where I lived out every summer of my life since birth. The episode starts with a shot of the desert that could have been drawn by a Disney animator working off a text that would make Edward Said wince, but pretty soon you knew this wasn’t that kind of a production, because Bourdain was in the frame, sitting on a camel, a grin on his face and a joke out of his mouth about how he was never going to make it anywhere going this slow. Such breaks from protocol made me feel at ease bringing Bourdain to my home — because that’s inevitably how it felt when I watched him engage with brown folks and Indian accents, that he was my guest, my white friend, boyfriend even, in my ultimate fantasies. Simultaneously, he was me, the American niece who feels at home in India. He engaged without fetishizing, touristed with ease, in the way of a person who’s been toggling between identities so long, the act of meeting a stranger from a strange land is the only familiar feeling.

Everybody has a Bourdain story, it seems; and for a lot of nonwhite people in this country, those stories take place in the countries their parents left, and in the American enclaves where they settled. One of the tweets that went viral yesterday, after news of Bourdain’s passing by suicide, was from Jenny Yang, an American comic born in Taiwan and raised in California. “Bourdain never treated our food like he ‘discovered’ it,” Yang wrote. “He kicked it with grandma because he knew that HE was the one that needed to catch up to our brilliance. I wish so much for his legacy to take hold in western (mostly white) food media culture. What a loss. I’m so sad.” Twenty-eight thousand people and counting retweeted Yang’s tweet, a testament to the strain of alienation that runs through this country, where we are simultaneously in and out, heard and unheard, excited by the white man who finally makes us feel he gets it. I saw the tweet after a friend shared it, herself born in India and transplanted to Dallas some years after my own parents got to Texas and had me. She is a cook now, her aim the subtle but true marriage of all of her influences: Tamilian home cooking, Texas meat culture, hipster locavorism, suburban fast food. I saw her retweet and thought about how Bourdain made his way into all of our homes, talked to all our grandmas.

But the episode I remembered in that moment wasn’t set anywhere with brown people, but in Maine, an episode of No Reservations this same friend insisted we watch soon after it aired. We did, in a barely furnished Austin apartment, windows open from the heat, with the reverence of new priests at the altar. The episode takes Bourdain to Maine under the tutelage of his camera guy, Zach, who’s from the northern state. They hit up fancy establishments in Portland and Zach’s family home, where they eat “mystery” bear and moose meat, found in the freezer the way the rest of us rediscover old Amy’s boxes. But it’s a scene at a traditional bean supper that stays with me, where Bourdain eats off a paper plate with Zach’s home community. Watching the kids running around the cavernous space lined in long plastic tables, older people seated on their haunches and digging in, I felt I was watching a recasting of my own childhood, of lunches at the DFW Hindu Temple, where dozens, then hundreds, and now thousands of members walk the hot pavement and eat homemade food, commune without saying much, but with the familiarity of family. I saw a country I thought I knew expose itself to me finally, in the safety of its own home. At one of the long tables, Bourdain talks to grandmas, but they’re not from Korea or Vietnam or India — they’re Zach’s, from Maine, and he asks them for stories about Zach. He knows they know more, about a man he spends most of his time with, than he does. Or they know different. Watching that scene years ago, I felt connected at the heart level, the “I’ll show you mine since you showed me yours” level, the “I know you won’t mistake me” level, to white people I didn’t know, for the first time ever. Watching it now, I think Bourdain connected to everyone at the heart level all the time.