In Memory of Felicia Langer, the First Lawyer to Bring the Occupation to Court

Felicia Langer was a Holocaust survivor, a communist, and one of the first Israeli lawyers to defend Palestinian residents of the occupied territories in the Israeli Supreme Court. She died in Germany last week. 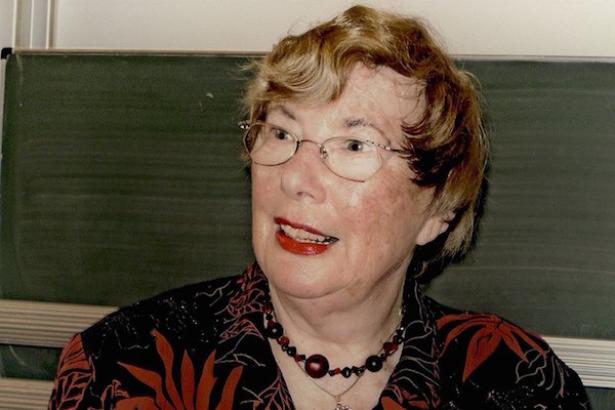 Langer was a human rights and peace activist, a communist, and one of the first attorneys to represent Palestinian residents of the occupied territories in Israeli courts. In Israel’s Supreme Court, she pioneered legal practices that today seem natural and obvious but were once considered outrageous. She was the first to challenge the expulsion of Palestinian political leaders from the West Bank, the first to challenge the army’s practice of demolishing the homes of Palestinians suspected of militant activities, the first to accuse the Shin Bet of torturing detainees, and the first to fight the practice of administrative detention.

In those days, there were very few Israeli lawyers willing to represent Palestinians. Langer — a Polish-born Jewish lawyer and Holocaust survivor who moved to Israel, joined the Communist Party, and defended Palestinians — became a hated figure among the general public. She was a Jew and a woman who joined forces with “the Arab enemy.” When I interviewed her during research for my book, The Wall and the Gate, she told me that there were periods when taxi drivers in Jerusalem would refuse to pick her up, that the threats against her were so severe that she was forced to hire a bodyguard, that she had to take the sign off of her office in Jerusalem, and that her neighbors asked her to clean off the words “you will die soon,” spray painted on her office’s door, because “it was not aesthetically pleasing.”

Langer fought, almost alone, against the heads of the judicial system at the time, against people with tremendous political and public power, like Justice Meir Shamgar and state attorney (and later a Supreme Court justice) Mishael Cheshin. The hearings in Langer’s cases were contentious. She never hesitated to accuse the establishment of carrying out crimes against her clients and to represent them — some of whom were members of the Palestinian leadership in the occupied territories, such as Nablus Mayor Bassam Shaka and Hebron mayor candidate Hazmi Natcheh — as victims of an evil regime.

Over the years, others followed the path that Langer blazed. First among them were Leah Tzemel, Elias Khoury, Raja Shehadeh, and Avigdor Feldman. Many others have joined since, as Langer’s path became a road, then a highway. But, in the 1990s, she came to see that highway as a fig leaf — that the judicial system was exploiting legal proceedings for public relations purposes and pro-Israel propaganda. She closed her office and moved to Germany, where she continued to fight the occupation and struggle for peace and coexistence.

The following is an excerpt from The Wall and the Gate: Israel, Palestine, and the Legal Battle for Human Rights (Metropolitan Books, 2018):

Veteran residents of Jerusalem will tell you that the winter of 1968 was particularly harsh and snowy. And they know that when it snows in Jerusalem, Hebron is usually also covered in white. In the winter of 1968 both of these biblical cities and the road between them were blanketed in snow. But neither snow nor impassable roads could stop Felicia Langer. With her famous determination, she decided to take to the slippery road and drive from her office in downtown Jerusalem to the Hebron police station. A Palestinian sheikh from East Jerusalem  had come to her office in the middle of the storm and told her that his son, who had just returned from studying in Turkey, had been arrested and taken to the Hebron station. When the parents sent their son clean clothes through the authorities in the detention facility, they received, in return, a dirty bundle that contained a bloody shirt. They had no idea what had happened to their son and they were very worried. Having been retained by the father to represent the son and visit him, Langer took a file folder and marked it with the number 1, the first case involving a subject of the occupation. Client number 1, the son of an East Jerusalem sheikh, would be the first of hundreds, maybe thousands, of Palestinians Langer would represent before the Israeli authorities over the next twenty-two years.

The Hebron police and the jail were housed in an old building in the center of the city, the Taggart Building, named after a British police officer who had gained expertise suppressing insurgencies in India and who designed fortified police stations all over Mandatory Palestine for His Majesty’s forces. The Israeli army was the third regime to use the structure, following the British themselves and the Jordanians.

When Langer arrived, she looked not just for the sheikh’s son, but also for two other clients, ‘Abd al-‘ Aziz Sharif and Na’im ‘Odeh, both members of Palestinian Communist movements in the Hebron area. Unlike the sheikh’s son, who, Langer found out during her visit, was suspected of membership in Fatah and infiltration into the country, the two Communists were suspected of nothing. They had been arrested under special powers stipulated in the Defense (Emergency) Regulations that were enacted by the British Mandate and had survived long after it ended. The regulations permit “preventive” (or administrative) detention, which is designed not to respond to an act already committed but to stop the potential danger posed by the detainee. Administrative detainees are neither accused nor suspected of anything and may be held without trial or charges being brought. Langer’s clients, Sharif and ‘Odeh, were to be the first raindrops in a monsoon of administrative detentions that would flood the West Bank and the Gaza Strip.

Langer was born in Poland in the early 1930s. Nearly all her relatives were murdered in the Holocaust. She and her parents managed to escape the Nazis to the USSR, but her father fell victim to Stalin’s regime. He died a short while after being released, in very poor health, from a Soviet gulag where he was held in dreadful conditions. Langer nevertheless became a devout communist. After immigrating to Israel, she joined the local Communist Party and became a pivotal activist. She began practicing law in 1965 and for a while worked in a Tel Aviv law office as an associate litigating all sorts of cases, but immediately after the 1967 war, Langer decided to devote her practice to representing Palestinians living under the occupation and opened her own office in Jerusalem.

In the late 1960s, she was one of just a handful of lawyers representing West Bank residents. Most of these lawyers were Palestinian citizens of Israel, almost all of whom had ties to the Communist Party of Israel (known as Maki). At the time, communist factions were deeply entrenched in Palestinian urban centers and the connections between the Israeli and West Bank and Gaza Communist movements paved the way for lawyers from Israel to represent Palestinian residents under occupation. Following Langer’s lead, these lawyers laid the groundwork for the extensive legal activism that continues today, activism marked by partnership, Sisyphean legal battles, and trust, given daily by Palestinians to Israeli lawyers, some of them Jewish, to represent them before Israeli institutions, primarily the High Court of Justice. This trust and partnership was maintained through five decades of occupation: even in the hardest times, when it seemed as though all the bridges between Palestinians and Israelis had been burned or bombed, solidarity in the fight against human rights violations did not wane.

Langer arrived in Israel in 1950, after living through the rough years of the war in the USSR, where, as we know, her family had fled from Poland. Her father had been sent to the gulag for refusing to become a Soviet citizen (he feared being unable to return to Poland after the war). After he died in late 1944, Langer and her mother struggled to provide for themselves in extremely harsh conditions, selling their few possessions to survive. When the war ended, Langer returned to Poland, where she met her future spouse. Her mother, who had remarried, emigrated to Palestine; Langer and her husband answered her pleas and eventually followed her.

In the early 1960s, Langer realized a dream, and, unusual at the time for a woman who had a child, she enrolled in the Hebrew University Law School branch in Tel Aviv. Her past compelled her to represent the disempowered, to fight for people who, like her family and herself, were victims of government malice. She studied law to put her worldview, which had crystallized during the war, into action and challenge discrimination and injustice. By the mid-1960s, Langer had become a qualified lawyer, but her attempts to find work in the public sector were unsuccessful.

Langer claims she was written off because of her Marxist convictions and her membership in Maki, Israel’s Communist Party, at the time. She had no choice but to turn to the private sector. But there she faced a different obstacle—her own conscience. After refusing to represent a man who was a pimp and was trying to evade paying alimony, she realized she had to set up her own practice if she wanted to pick her cases according to her many principles. In her practice Langer represented clients who aligned with her ideological commitments: detained protesters, women whose rights had been violated, and Arab citizens of Israel in conflict with the authorities. This continued until 1967, when, in the space of six days, 1.5 million Palestinians came under Israeli occupation. At a time when Israeli society, with its many Holocaust survivors, was dedicated to the notion that the moral of the rise of the Nazis, their conquest of Europe, and the Final Solution was that the remnants of the Jewish people were obliged to build an invincible country that would protect Jews from victimhood, Langer drew a different lesson: any discrimination or occupation was fraught with danger, not just by the Germans and not just against Jews.

Representing Palestinians who had suddenly come under Israeli military rule, a regime of all-powerful army generals, was the very fulfillment of the goal for which she had studied law. The only lawyers representing the occupied at the time were a handful of Palestinian Israelis. Langer was a far cry from the typical defender of Palestinians: a woman, a Communist, and a European Jew. With her Polish accent and command of Latin, her partnership with West Bank and Gaza Palestinians may have been the strangest sight in the Middle East. To provide access to West Bank residents, Langer rented a small office on Koresh Street in Jerusalem, which would be her home base for the next twenty-three years. She soon became synonymous with the fight for Palestinian rights. To others she was a traitor and an enemy sympathizer.

In 1990, after a long career of public and dramatic battles with the authorities, Felicia Langer closed her Jerusalem office and left Israel to take up a teaching position in Germany. In an interview in the Washington Post Langer said, “I couldn’t be a fig leaf for this system anymore.”

[Michael Sfard is an Israeli human rights lawyer and the author of The Wall and the Gate: Israel, Palestine, and the Legal Battle for Human Rights (Metropolitan Books, 2018).]

+972 Magazine is owned by our bloggers and journalists, who are driven by passion and dedication to the causes we cover. But we still need to pay for editing, photography, translation, web design and servers, legal services, and more.

As an independent journalism outlet we aren’t beholden to any outside interests. In order to safeguard that independence voice, we are proud to count you, our readers, as our most important supporters. If each of our readers becomes a supporter of our work, +972 Magazine will remain a strong, independent, and sustainable force helping drive the discourse on Israel/Palestine in the right direction.