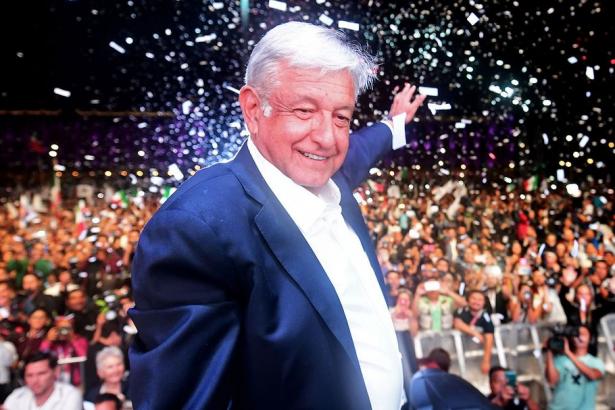 When the polls closed in Mexico’s presidential election Sunday evening, the winner by a landslide was Andrés Manuel López Obrador, a socialist reformer and unabashed champion of the working class. It’s a hugely significant turn of events. Since 2000, Mexico has been governed by pro-business technocrats, responsible centrists with economics degrees from Harvard and Yale, leaders with credibility in Washington, reliable partners in free trade and the war on drugs. For the Mexican people the results have been a colossal, gruesome disaster, but it was rare to read anything critical of former presidents Vicente Fox, Felipe Calderón or Enrique Peña Nieto in the U.S. media. Now all of a sudden the American commentariat are furrowing their brows and wringing their hands, deeply concerned that things might go wrong for our southern neighbor.

The standard line is that López Obrador is a sort of Mexican Donald Trump. “Will Mexico Get Its Donald?” was the title of a recent opinion piece by New York Times columnist Bret Stephens. According to the Times’ other election-night coverage, “The parallels between Mr. López Obrador and President Trump are hard to ignore.” No one belabored the comparison like The Los Angeles Times, which would have us believe that Trump and the Mexican president-elect are equally “anti-intellectual and xenophobic,” offering “unrealistic expectations” and stoking “fears of immigrants and outsiders,” while railing against elites. “These touchstones,” the article warned, “are clearly part of a Trump playbook.”

The comparison is ridiculous. López Obrador is nothing like Trump. The fretting in the press is a symptom of a political establishment so hopelessly committed to a failed free-market consensus that they can’t distinguish between a moderate democratic socialist and the incipient fascism of Trump’s insane clown posse. López Obrador has been a political figure in Mexico for most of his life, and played an active role in the country’s transition from one-party rule to a reasonably functional democracy. As mayor of Mexico City, he dealt with the nuts and bolts of managing the world’s largest metropolis in a largely apolitical manner, and left office with an 84 percent approval rating. He nearly won the presidency in 2006, and again in 2012, on a platform of putting the needs of the poor ahead of the rich, and denouncing government fraud.

To suggest that López Obrador engages in the same kind of scapegoating and xenophobia as Trump is to willfully miss the point of his campaign, which was laser-focused on the problem of corruption, a very real and debilitating cancer on the Mexican body politic. He may be derisive of the likes of Ricardo Anaya, the runner-up in Sunday’s election, a highly educated lawyer whose airbrushed ads proposed solving Mexico’s problems with “the latest technology,” but that hardly makes López Obrador an anti-intellectual on par with Trump, a bragging rich kid from Queens whose entire career is based on playing a caricature of a big boss businessman on reality TV.

Possibly the most preposterous notion is that Trump and López Obrador share a similar temperament. López Obrador is an ordinary, reasonably decent man with a boring family life, a modest Mexican official who lives in a drab townhouse, drives an old car and walks the streets without a bodyguard – truly impressive given that 120-plus politicians were assassinated in Mexico in 2018. On the campaign trail, López Obrador promised to turn Mexico’s presidential palace into a public park, sell off the government’s fleet of presidential aircraft and cut the president’s salary in half. “We are going to get rid of the luxuries of government,” he said. The same day that Trump was inaugurated, he hung gold drapes in the Oval Office, and the faux opulence of his lifestyle can only be compared to some Jersey Shore version of Saddam Hussein, what with the golden toilets and porn stars and lascivious comments about his own daughter. But we’re told that both these men are self-aggrandizing egomaniacs. It makes no sense.

Then there’s the question of the Drug War, which hangs over everything in Mexico. It’s the deadliest conflict in the world aside from Syria, and it has to stop. Trump’s only suggestion is to hint at sending in U.S. troops – a truly moronic plan, given that some 200,000 people have died since the George W. Bush administration convinced the Mexican government to deploy its military to fight the cartels in the streets, and gave them the money and weapons to do it under the disastrous Mérida Initiative. López Obrador hardly has all the answers, but he’s at least willing to consider some combination of drug legalization and jobs programs in addition to military force. One of his campaign slogans was “Abrazos, no balazos,” or “Hugs, not gunshots.” Straight from the Trump playbook, right?

Buttonholing López Obrador as the flip side of the Trump coin is a predictable move. It’s the same thing much of the press did to Bernie Sanders, the only American political figure to whom López Obrador can fairly be compared. In fact, the resemblance between Sanders and López Obrador is striking. They both favor New Deal-style spending on education, health care and employment programs, and have to deal with detractors crying, “But how will we pay for it?” even though they never question far costlier programs that benefit corporations and the rich. Both Sanders and López Obrador have spent their entire careers railing against the influence of money in politics, and have risen to prominence solely on their appeal to working people, with no assistance from the media and elites. They even look the same: somewhat rumpled, white-haired old men who couldn’t care less about their personal appearance or the trappings of power and wealth.

The likes of Bret Stephens would have us see López Obrador in the context of a global wave of illiberal populism, of a piece with the rise of neo-nationalism in Britain, Italy, Hungary and Poland, as well as the United States. In reality, he belongs to a pro-labor tradition that’s largely been suppressed in this country, most recently in the hit job the Democrats pulled on Sanders in the 2016 election. Like López Obrador in Mexico, Sanders is far and away the most popular politician in the U.S., not on the strength of some Trump-like personality cult, but on his policy proposals, including free medical care for all, free or nearly-free higher education and jobs programs for the poor.

Conventional wisdom in American politics is that we just can’t afford these things, even though every other modern democracy somehow manages to. That’s beginning to change, though, as in recent Democratic primaries, like the nomination of the unapologetic Stacey Abrams in Georgia’s gubernatorial race, and the hurting Alexandria Ocasio-Cortez put on company man Joseph Crowley in New York’s 14th Congressional District. Ocasio-Cortez self-identifies as a democratic socialist, and you can guess what happened after she won. It’s almost like these Washington pundits follow a flow chart.

As Mexico’s cartoonishly rich and corrupt elite found out on Sunday, the scare tactics only work for so long in the face of mounting anger over economic and social conditions that just get worse with every passing year. Fascism and socialism both arise from the failure of liberalism. That doesn’t make them equivalent.