Dark Money is an air-raid siren of a documentary about the pernicious influence of corporate cash in American politics. 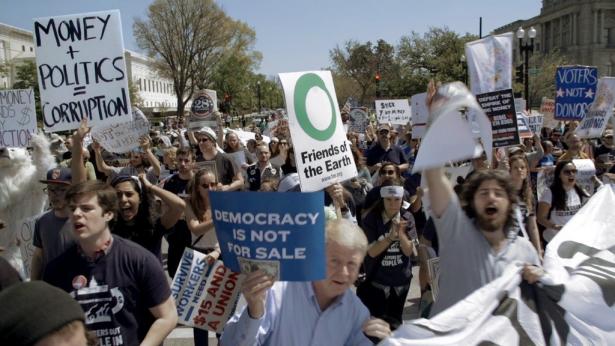 Which is worse, corruption you can see or corruption you can't? In Dark Money, a documentary about invisible corporate shenanigans in her home state of Montana, director Kimberly Reed makes the incisive case that the latter threatens to sink our democracy outright.

If 98 movie minutes about the subversion of campaign financing isn't quite your idea of beating the summer heat, let me start by saying there's not a dull or dry moment in Reed's briskly paced film about the secret assault on the American electoral and judicial process by corporations whose agenda is nothing less than the dismantling of government itself. Dark Money tells a hair-raisingly specific American tale of illicit power. In other words, the stuff of thrillers since Hollywood time began — except that in this muckraking expose, the graft was real. Mercifully, so was the pushback from a citizenry long-accustomed to corporate chicanery and led by a few savvy activists working very hard for free.

Dark Money opens and closes with a flock of geese flying over a toxic copper quarry. As Reed's story unfolds, we learn that the beautiful birds' mass demise is only a tiny fraction of the wreckage caused by shady money moguls tinkering with electoral campaigns over a hundred years of Montana history. In part because its elected officials are ordinary folks who often double-up as farmers, teachers and the like, Montana is also heavy on a defiant populism that cuts across party lines. Which may be why it's also the only state, according to Reed, to have fought back locally against the U.S. Supreme Court's 2010 rollback of laws preventing corporations and unions using their treasury funds for electioneering.

Skillfully fielding an enormous cast of witnesses and participants, Reed shows how Democrats and Republicans running for political and judicial office found themselves targeted by vicious attack ads from deep-pocketed non-profits with blandly vanilla names like Citizens United or Americans For Prosperity, or strategically crowd-pleasing monikers like Mothers Against Child Predators. No one had ever heard of these shape-shifting advocacy groups, and it was difficult to track the money back to the shadowy ideologues hiding behind them. With the ranks of the working press hamstrung by financial crisis, it fell to a shockingly small band of enterprising freelancers — helped by some highly compromising documents that turned up in a colorfully unlikely location — to uncover a trail of money and influence that led back to wealthy right-wing libertarians. (The Koch brothers come up a lot.)

The rest is a gripping tale of self-help sleuthing topped off by the televised trial of Art Wittich, a local State Senator accused of being on the take. John Adams, a newly laid-off local reporter who will surely be played by Woody Harrelson in the event of a narrative remake of Dark Money, founded his own dirt-digging website with help from colleagues and donations from an increasingly outraged public. Attorney Gene Jarussi came out of retirement to work pro bono on tracing the money trail connecting Republican State Senator Wittich to an anti-environmental outfit murkily titled American Tradition Partnership. But perhaps the real heroine is Sarah Arnold, a young Republican former staffer for ATP who, disgusted by her employer's dirty tricks, agreed to testify at Wittich's trial. Here's hoping she has stayed safe since.

Without the indispensable Dark Money, few of us would have heard of this David-and-Goliath struggle. Reed keeps the story mostly local while adroitly teasing out the broader threat of a lack of transparency that's been kicking around American politics since way before Watergate. Her riveting film shows how, with the Internet's global reach and the ever-growing concentration of money and power, dark money is redrawing the political landscape in ways that render parties irrelevant and imperil democracy itself. As one of the film's talking heads points out, when the Supreme Court of the United States decrees that corporations have the same rights as individuals, and financial contributions count as free speech, it is time to take the fight for democracy local, as Montana did. The trick will be to keep it up — and Dark Money shows what a long, hard grind that will be.

Ella Taylor is a freelance film critic, book reviewer and feature writer living in Los Angeles. Born in Israel and raised in London, Taylor taught media studies at the University of Washington in Seattle; her book Prime Time Families: Television Culture in Post-War.