Of the twenty-three categories of James Beard Awards this year, (some of which were awarded to groups or entire restaurants), well over half were won by women or people of color.

August 13, 2018 Helen Rosner The New Yorker
Printer friendly
The Oscars of the Food World Finally Give Women and Chefs of Color Their Due Published August 13, 2018 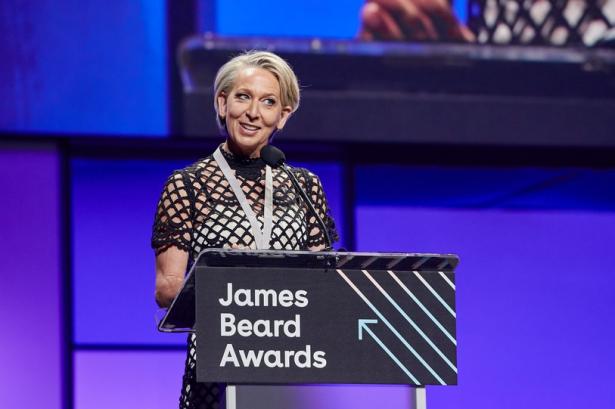 The chef Dominique Crenn runs some of the most virtuosic restaurants in America, including the two-Michelin-star Atelier Crenn, in San Francisco. But she is perhaps most famous for a dubious honor bestowed by the influential and mysterious awards body known as the World’s 50 Best Restaurants, which, in 2016, named her the World’s Best Female Chef. None of Crenn’s restaurants have appeared on the main 50 Best list—indeed, no restaurant operated solely by a woman ever has—and Crenn has been vocally critical of her gendered consolation prize. (“It’s stupid. A chef is a chef,” she recently told the Washington Post.) So it was powerful to see her take the stage at the 2018 James Beard Awards, on Monday night, to receive the award for best chef in California, and, after thanking her team and her wife, to lead the crowd in a call and response. “I rise,” she said, and the assembled food-world luminaries said it back. “For equality. For humanity. And Mother Earth.”

The James Beard Awards, often described as the Oscars of the food world, have historically been more inclusive in distributing their honors than a group like the World’s 50 Best—but not by that much. In another year, Crenn’s call to action might have landed as an admonition, or just empty podium dramatics. But on Monday it felt like a touchdown dance, an exultant prayer of victory. The past year has seen some of the culinary world’s most powerful players brought down by the #MeToo movement. Mario Batali was not in attendance at this year’s awards ceremony, which was held at the gilt-trimmed theatre of the Lyric Opera of Chicago. Neither was John Besh, Ken Friedman, or many of the other chefs or restaurateurs whose alleged histories of sexual harassment and abuse have been reported—though the chef Todd English, who was involved in a sexual-harassment lawsuit against his Plaza Hotel food hall last year, spent much of the evening camped out at the mezzanine bar. (Batali, Besh, and Friedman contested some of the allegations against them, but have publicly apologized and stepped away from their companies. The Plaza Hotel said, in a statement, “We take all claims of harassment or discrimination seriously.”)

While the voting for this year’s awards was under way, earlier this year, the James Beard Foundation issued a pointed reminder to its judges to consider the character of the chefs and restaurants when casting their votes. The results were dramatic. As category after category was announced at the ceremony, the winning chefs and restaurateurs taking the stage looked different than they have in years past. Of the twenty-three categories (some of which were awarded to groups or entire restaurants), well over half were won by women or people of color.

“I want the next generation of curly-haired, melanin-rich, thick-accented, queer and straight, immigrant little girls and boys to know what’s possible, to see that there’s a place for them at the table, too,” Vallery Lomas, a winner of “The Great American Baking Show,” told the crowd as she introduced the award for Outstanding Baker. (Lomas’s season of the show was yanked off the air before its completion, last year, after one of the celebrity hosts, the pastry chef Johnny Iuzzini, was accused, by several former employees, of sexual misconduct, and her unaired victory was quietly announced on the show’s Facebook page. Iuzzini called many of the allegations “inaccurate,” but said that he took responsibility if members of his team were made uncomfortable by his words or actions.) Lomas was one of nearly a dozen black men and women to take the stage in the course of the evening, either presenting or receiving awards—a promising change for an organization that has been criticized for ignoring or tokenizing the work of black cooks. An accounting done by the Web site Mic revealed that, in the history of the awards, only five black chefs have ever been a Best Chef finalist; this year’s ceremony was the first to recognize black women—Mashama Bailey, of the Savannah restaurant The Grey, and Nina Compton, of Compère Lapin, in New Orleans—as finalists. Compton made history in winning her category: the best chef in the South. “What the heck is going on,” Thérèse Nelson, the chef and historian of black culinary tradition, tweeted, as the pitmaster Rodney Scott, from Charleston, South Carolina, was named best chef in the Southeast. “Im about to burst into tears overwhelmed with how our foodways are showing out tonight!!”

For an awards presentation dedicated to food and drink, there was little of either on hand. The lobby was full of restaurant crews setting up for the tasting reception that would follow the ceremony, but a riot squad of ushers and publicists kept the peckish out of snacking distance. The only exception was in the press area, where those of us watching a live feed and waiting to interview winners were provided with a steady supply of cheese and gin. The room, consequently, began to fill up, as in-the-know guests decided that it was a better place to hang out than in the tight seats of the main theatre. Scott, Crenn, and other winners held court in various corners, showing off their silvery medals. The actor and singer Zooey Deschanel, whose year-old company The Farm Project promotes food-production awareness, had presented the awards for the best chefs in California and the Southwest, and she gamely posed for selfies with smitten journalists. (“Thank god we have at least one real celebrity here,” one blogger said.) Alex Guarnaschelli, the “Chopped” judge and Food Network star, screamed so loud and long when the Lilia chef Missy Robbins was named the best chef in New York that I had to take a moment in the hallway to let the ringing in my ears subside.

As the awards ceremony shifted from regional to national honors, and the crowd in the press room swelled beyond capacity, people began trickling out to reassess the situation in the tasting reception. As Deschanel and the apron designer Ellen Bennett (the duo, Bennett told me, had gone shopping together for the vintage dresses that they were wearing) approached one table of appealing bites, they were snappishly told, “It’s not time yet.” The chef Sarah Grueneberg, of the Chicago restaurant Monteverde, ran a more relaxed station, and happily handed over shot glasses filled with a fork-swirl of spaghetti under a dollop of caviar. As the last honors were awarded, and the evening’s m.c., the chef and TV host Carla Hall, bid the crowd good night, the theatre lobby became a gridlock of sequined gowns and wine glasses, with tight knots of fans and well-wishers surrounding the evening’s biggest winners: Frank Stitt, of Highlands Bar & Grill, in Birmingham, Alabama, and also his longtime pastry chef, Dolester Miles, deeply beloved figures who both won their first James Beard awards after years of nominations; Gabrielle Hamilton, the chef of New York City’s Prune, who was named Outstanding Chef; José Andrés, the chef and activist, who was named Humanitarian of the Year; and Eduardo Jordan, the Seattle chef, who won twice—once for himself, as best chef in the Northwest, for his restaurant Salare, and again for his Southern-food temple JuneBaby, which was named the country’s Best New Restaurant.

As with many long, drawn-out awards ceremonies, the real point of the Beard Awards is the parties, which begin several days before the ceremony and extend well into the morning after. One of the most surreal moments of my career took place a few years ago, when the Beards were held in New York, as I watched Thomas Keller and Daniel Boulud climb atop a table in the middle of a disco-lit Eleven Madison Park, at one o’clock in the morning, and spray a joyously screaming crowd of drunken revellers with jeroboam-sized bottles of champagne. The after-parties in Chicago, where the ceremony has been held since 2014, are less absurdly sybaritic but no less fun: platters of fried chicken at Roister, endless margaritas and Frito pies at Big Star, a crowd so densely packed at Girl & the Goat that I couldn’t get in the door. At Fulton Market Kitchen, a mazelike, mural-filled warehouse space, bartenders from six different bars around the country set up shop and competed to see who could sling the most wildly creative drinks; upstairs, José Andrés sliced jamón ibérico with his bartending team and danced with wild abandon.

Even the parties, though, felt different this year than they have before—less rigid, less bro-filled, less air-kissy, and more real. The mood was one of joy and relief. But throughout the after-parties and hungover breakfasts, the air buzzed with a worry: Was this year’s awards, with its remarkable elevation of women and people of color, a one-off? Was it just a balm to soothe a mounting exasperation at the spotlight perpetually trained on white, male chefs? Or was it a genuine sea change, a refocussing of the Beard Foundation—and the culinary world it reflects and shapes—onto a more genuinely inclusive reality? During the ceremony, when Gabrielle Hamilton took the stage to accept her award for Outstanding Chef—the Best Picture of the Oscars of the food world—she didn’t thank anyone. Instead, she told a story.

“I won the James Beard award for best chef New York City in 2011,” she said, “and, the next day, this guy wrote in Time magazine that everyone knows that the award isn’t merit-based, and that the only reason I won is that I had written a popular book that year. It took me the last seven years to recover from that comment. It had a really toxic effect, and one of the things that I did to prop myself back up was to remind myself that I had been nominated in that category three years in a row.” Hamilton went on, “I’m only telling this story because it would make me so happy—I would be so grateful—if I didn’t read tomorrow that the only reason I got this is that I’m a woman.”

A previous version of this post erroneously identified the first black woman to be a finalist for the Best Chef award.

Helen Rosner is a roving food correspondent for newyorker.com.