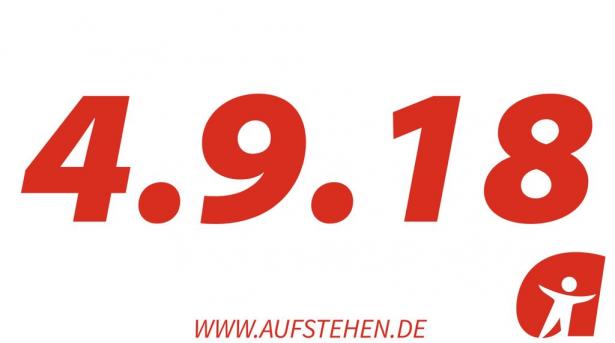 __________
The following is a translation of an interview in German with Sahra Wagenknecht, a leader of Die Linke, Germany's anti-neoliberal electoral party. Translation by Portside moderators.

"Aufstehen" - Sahra Wagenknecht on Her "Movement of Movements"

Sahra Wagenknecht sees a political crisis. The government is more concerned about power than about real issues. The co-chair of Die Linke’s parliamentary delegation now wants to pool left-wing forces across all parties in a “movement of movements.” In this exclusive interview, Wagenknecht explains the initiative, how it might change politics and gives her response to critics.

Ms. Wagenknecht, your movement "Aufstehen” (“Stand Up”) will be launched on September 4. What is the initiative about?

Sahra Wagenknecht: “Aufstehen” is a movement for more justice in Germany. There is already a majority for an alternative in the population in the population. Polls show a majority want higher wages, support a wealth tax, and want corporations to be
properly taxed. Only, this majority has no political representation -- since the SPD has taken a course against its own voters with its [neoliberal] Agenda 2010, and the Greens are recognized as a power reserve of the [conservative] CDU.

In essence, it is about the dissatisfaction of the citizens?

Democracy is in crisis. Many people feel abandoned by politics. Especially the poor see their interests no longer represented. This strengthens above all right-wing parties such as the [far-right, anti-migrant] AfD. If you want to change that, you need a new point of departure.

If our movement gets really strong, we can change politics. Business lobbyists have the money to buy public policy. But if we succeed in emboldening hundreds of thousands to become involved in their own interests, we will be more powerful. Then the party system will change, and those in the parties who support a more socially conscious politics will be pushed forward.

We want a government that implements politics for the great majority of people, not just the top ten thousand.

In the first three days 50,000 people have already registered with us.

How is your movement financed?

At the moment, we are financing ourselves through the private money of the initiators. There will not be membership fees in the future either, but we will raise funds through donations. Because events, campaigns -- everything costs money.

What will your fight for more social justice look like?

We no longer want to leave the Internet and the street to the neo-liberal elites and the Right. We want to bring social issues back to the center of political debate in Germany and prevent the AFD from continuing to dictate the issues.

Even though on the surface, much of the dissatisfaction is directed against the Merkel government's refugee policy, the truth is that people's anger and disappointment are about completely different topics. It is about low wages, bad health care, decaying schools, rent gouging.

What do you see the movement doing, concretely?

We will be online on our website, aufstehen.de, and on social media with creative, unconventional content. And we will build local structures, and hold events, street actions, large public gatherings.

Above all, however, we will do one thing: involve our fellow combatants, to speak up, to give their voice a platform. With modern software we can organize discussions with hundreds of thousands of participants.

How do you want to exert political pressure in order to build a different majority?

A movement cannot take part in elections in Germany. But if we are strong, we can build up pressure for the parties to open up their lists to supporters of the Aufstehen movement. However, it is not primarily a question of getting parliamentary posts, but of launching an initiative that makes political engagement attractive again.

We want to address people who have turned away in disappointment from the parties. We want to win those who have no interest in the dog-and-pony shows of party politics but are interested in politics and want to help shape them. We will be different, in our communication, our appearance.

After all, the majority of our now over forty prominent founding members do not come from politics. There are actors, singers, writers, scientists, cabaret artists, theater people. They all no longer want to see a government without ideas or backbone, destroying social cohesion in our country while neglecting key issues of the future.

Are there existing models for Aufstehen?

We've exchanged views with activists from successful campaigns, such as Momentum in support of Labour leader Jeremy Corbyn in the UK, or Bernie Sanders in the US. We also have contacts with Jean-Luc Mélenchon and "La France insoumise" ("Indomitable France"). All movements that are fresh and modern.

The conditions are of course very different. French elections are different from American ones. And conditions in Germany differ from both. We have to develop our own models, and not just copy. But the exchange is important.

Where did the left parties in Germany fail?

The SPD [Social Democratic Party] lost many voters because over the past twenty years it has shaped a transformation into an unleashed Goldman Sachs capitalism: temporary work, Hartz IV [unemployed benefits cutbacks], pension cuts, all of which it defends to this day.

The Greens have moved far from their roots. They were a rebellious party, a peace party. Today, the Greens' support for environmental protection ends at the point where they have to deal with powerful business lobbyists.

Where did your own party fail?

Die Linke has to ask itself why it has not been successful in winning voters disappointed by the SPD. Many do not vote anymore, or choose AfD. These are not racists, but simply people who are angry and dissatisfied - and have every reason to be. In recent years, Die Linke has been less and less able to reach the poor, the low paid and the unemployed. On the contrary, they also turn away from us. That is a big problem.

How can your movement counterbalance the AfD?

We are a counterweight to the shift to the right because we want to give people hope for a different policy. We want to renew democracy by bringing it back to life. Currently, the interests of the majority do not prevail, so many lose their faith in democracy.

Big promises were made before the [federal] elections last fall. Now the grand coalition [Merkel’s CDU, the Bavaria-based CSU, and the SPD] is in office for half a year - but rents continue to rise and many retirees cannot live on their pensions. Employees face greater exploitation, while the impact of precarious jobs impacts the direction of the economy as a whole. Social problems are exacerbating and nothing changes. If this continues, more people will turn away from democracy.

After the general election, a left alliance could have been possible, but, according to recent polls, not anymore. Why?

Die Linke has always offered the SPD the possibility of a common political platform: together we could have renewed the welfare state and established a foreign policy based on peace and disarmament. But [an alliance] would have to be for a different politics, not just being in office. A red-red-green coalition [SPD-Linke-Greens] which does nothing different from the Merkel government is not attractive to voters, and therefore no longer has majority support.

In other words, Die Linke was not strong enough to prevail?

Right, we did not manage to get SPD and Greens to correct their course. The pressure must come from society.

Hence the “movement of movements” (Sammelbewegung) …

Yes, it is not directed against individual parties, but against the political orientation that we have been seeing in Germany for years now.

What role do you play in the movement and who are your supporters?

I am one of more than forty founding members. The names of these prominent supporters will be released on September 4 when our movement officially launches. Some of the initiators come from the SPD, the Greens and Die Linke. Most, however, are not a member of any party.

Despite a great influx of support, you are also being sharply criticized. Bundestag Vice President Thomas Oppermann (SPD) accuses you of left-wing populism, the deputy SPD chairman Ralf Stegner speaks of "PR actions with ego-trip overtones.” Others accuse you of fishing for right-wing votes. What do you say to your critics?

I can understand that those who do not want change are afraid of us. They should be. We do not want the grand coalition forever. We want a new government, a different politics.

We are clearly perceived as a threat by some for attacking relationship with which they have become comfortable. That's why they try to defame us. The SPD leadership should rather ask themselves why ten million voters have deserted them, a part of whom are today voting for the right. That's a failure of the party and not the voters.

Critics see a danger that your movement will split Die Linke. Is Aufstehen also a challenge to Die Linke? Will you weaken and split it, or unite and strengthen it?

I do not see the movement at all in contradiction to my party. On the contrary, it's about strengthening the social left. Die Linke was founded to change politics. But it cannot manage that alone with its nine to ten percent.

Currently, we can only watch the decline of democracy and the cute in social insurance. We can make speeches against this in the Bundestag, but we cannot stop it. Therefore, every member of Die Linke, the SPD and the Greens, dissatisfied with the current situation, should support our initiative.

Aufstehen is an extra-parliamentary movement. Will it ever be a political party?

We want to unite and not divide. If we started a new party now, it would force the members of existing parties to either not participate or leave their own party. In addition, a new party would offer little promise of success because many people do not want to get involved in a party. But they are quite interested in other, creative initiatives for collaborative action. A movement can also create opportunities for direct democratic debates and decisions. We will ensure that our fellow campaigners truly have a voice.

__________
Changes and Continuity: Four Decades of Industrial Relations in China

Class struggle between capital and labour around the issues of production, which is constrained by global political economy, defines the history of China’s integration into global capitalism. At the same time, the state remains a contested terrain of class struggle in China.