Uri Avnery, the Israeli Optimist who Played Chess with Yasser Arafat, has Died.

Uri Averny, a Holocaust survivor, never gave up on the belief that peace, never stopped organizing for an end to Israeli aggression against the Palestinians. 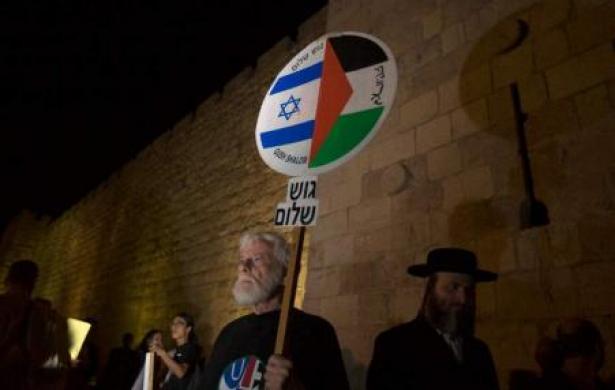 It was somehow fitting that first news of Uri Avnery’s plight should reach me from one of Israel’s staunchest enemies, the Lebanese Druze leader Walid Jumblatt. One legend sending sad news of another, you see, a socialist preparing to mourn a fellow socialist, sending his sympathy for the 94-year-old Israeli political philosopher. That same philosopher was once a German Jewish schoolboy, originally called Helmut Ostermann, who refused to give the Hitler salute at school, but who was, when I received Jumblatt’s message – still, just – “an indispensable mind to understand the history of fascism, a major destructive element of the 20th century”. Jumblatt’s words. Avnery, he added, also understood “the history of Zionism, another despicable apartheid theory that is an offshoot of fascism”.

Uri Avnery suffered a massive heart attack at the weekend and died on Monday morning, but he was himself a Zionist, or at least a believer in a left-wing, courageous but humble “light among the nations” Israel; the kind many of us, in our heart of hearts, would like to believe in. He was the sort of Israeli that we bleeding heart liberals go and see when we arrive in Israel because they say what we want to hear.

“Tell Jumblatt that he must break up his sentences into paragraphs,” Avnery told me when I left his Tel Aviv apartment six years ago. “He says everything in one long text and I can hardly breathe.” Lesson duly passed on to Jumblatt from a man who often wrote single sentence paragraphs, an annoying habit of tabloid journalism which does occasionally get a message across rather well.

He was a wee bit deaf when I met him again – and for the last time – six years ago, but he spoke so quickly, and in perfect sentences, that my pen skidded over the pages of my notebook until it ran out of ink and I had to steal his own biro. I still have the book, and the ink changes from my black to his pale blue at a point when he is talking at high speed about Hamas, with whom he often met, furious that Gaza had turned into a storyline about rocket attacks and retaliation.

“Whenever either of the two sides want to start shooting again, they will,” he said. The ink had just changed its colour on the page. “In Gush Shalom [which Avnery founded], we put out a sticker five years ago, which said: ‘Talk to Hamas’.”

This is not an obituary of Uri Avnery, even though the institution has the great journalistic merit of a story with a beginning, a middle and an end. Because Avnery’s warnings and prescience were so contemporary – so absolutely on-the-ball for today’s news from the Middle East – that they can be repeated now, today, as if the great old leftist warrior is still alive. And there he is in my six-year old notebook, very much alive, still demanding peace with the Palestinians, peace with Hamas, and generosity and a Palestinian state on the old 1967 borders – give or take a few square miles – and he believes Israel could have peace tomorrow, next week. If Netanyahu wanted it. “The misfortune of being an incorrigible optimist,” is how he described his predicament to me. Or perhaps an illusionist?

His family fled Nazi Germany for Palestine and I went to see him again – he who had played chess with Arafat – after the 1982 massacre of up to 1,700 Palestinians in the Sabra and Chatila refugee camps in Beirut, a war crime committed by Israel’s Christian Phalangist allies while Israeli soldiers watched but did not intervene. I had walked across the bodies in the camp. How could the survivors of the Jewish Holocaust and their children let this happen to the Palestinians, I asked Avnery? Avnery was only 63 years old at the time. His reply is worth printing, in full:

“I will tell you something about the Holocaust. It would be nice to believe that people who have undergone suffering have been purified by suffering. But it’s the opposite, it makes them worse. It corrupts. There is something in suffering that creates a kind of egoism. Herzog [the Israeli president at the time] was speaking at the site of the concentration camp at Bergen-Belsen but he spoke only about the Jews. How could he not mention that others – many others – had suffered there? Sick people, when they are in pain, cannot speak about anyone but themselves. And when such monstrous things have happened to your people, you feel nothing can be compared to it. You get a moral ‘power of attorney’, a permit to do anything you want – because nothing can compare to what has happened to us. This is a moral immunity which is very clearly felt in Israel. Everyone is convinced that the IDF is more humane than any other army. ‘Purity of arms’ was the slogan of the Haganah army in ’48. But it never was true at all.”

And Avnery was a member of that army, badly wounded in the 1948 war; he even became a member of the Knesset, but was threatened by the Israeli cabinet after he met Yasser Arafat in Beirut. He should be tried for treason, Israeli ministers said. I think Avnery was rather proud of that. His curmudgeonly, irritating, courageous personality could embrace the occasional political martyrdom, something which modern socialists are almost all too frightened to contemplate.

Netanyahu – six years ago when I last saw Avnery and until the days before his death – enraged the old Israeli soldier of 1948. What was the Gaza war meant to achieve, I asked him in 2012 – for there always has “just been” a Gaza war in recent Israeli history, and the latest, in November of that year, had killed 107 civilians in Gaza and four civilians on the Israeli side of the line. And what was Netanyahu and his government – then and, I suppose, today – doing, I asked him?

Avnery’s eyes sparkled and he spat out his reply. “You are presuming you know what they [Netanyahu’s government] want and you presume they want peace – and therefore that their policy is stupid or insane. But if you assume they don’t give a damn for peace but want a Jewish state from the Mediterranean to the Jordan River, then what they are doing makes sense up to a point. The trouble is that what they do want is leading into a cul de sac… If they annex the West Bank as they have annexed east Jerusalem, it doesn’t make much of a difference. The trouble is that in this territory which is now dominated by Israel, there are about 49 per cent Jews and 51 per cent Arabs – and this balance will become larger every year because the natural increase on the Arab side is far greater than the natural increase on our side. So the real question is: if this policy goes on, what kind of state will it be? As it is today, it is an apartheid state, a full apartheid in the occupied territories and a growing apartheid in Israel – and if this goes on, it will be full apartheid throughout the country, incontestably.”

The Avnery argument went bleakly on. If the Arab inhabitants are granted civil rights, there will be an Arab majority in the Knesset and the first thing they will do is change the name “Israel” and name the state “Palestine”, “and the whole [Zionist] exercise of the past 130 years has come to naught”. Mass ethnic cleansing would be impossible in the 21st century, Avnery assured me. I wonder.

He often pondered the demise of the Israeli “Left” – they were “hibernating”, he said after Ehud Barack, the (Israeli) Labour leader, had come back from the Camp David talks in 2000 as self-proclaimed leader of the “peace camp”, “and told us we have no partner for peace”. This was a death blow. It was not Netanyahu who said this, but the leader of the Labour Party. This was the end of “Peace Now”.

Perhaps his next words should be written on Avnery’s grave. “When I met Arafat in 1982” – he was to meet him again many times – “the terms were all there. The Palestinian minimum and maximum terms are the same: a Palestinian state next to Israel, comprising the West Bank, the Gaza Strip and East Jerusalem as a capital, small exchanges of land and a symbolic solution to the refugee problem. But this lies on the table like a wilted flower…”

Avnery remained convinced that Hamas would accept the same. He lectured to them in Gaza in 1993, “standing there, facing 500 black-bearded sheikhs, speaking to them in Hebrew – I was applauded and invited to lunch”. For them, Avnery, explained, Palestine is a “waqf” and cannot be handed over, but a truce can be sanctified by God. “If they offered a truce for 50 years, that is personally enough for me.” Sure, he said, the Hamas manifesto wants to destroy Israel. “But abolishing a manifesto is a very difficult thing to do – did the Russians ever abandon the communist manifesto? The PLO did theirs.”

Back then, in 2012, I ended my report on the 89-year old Avnery with the observation that “there are more than a few liberals in Israel who hope that Uri Avnery lives for another 89 years”. Now there are even fewer liberals left, and Avnery lived for less than another six years. There was to have been a 95th birthday party for him in Tel Aviv next month. If they still hold it, however, Avnery’s friends – and enemies – should proclaim that Avnery is dead. But then add: And long live Avnery.

[Robert Fisk is the multi-award winning Middle East correspondent of The Independent, based in Beirut. He has lived in the Arab world for more than 40 years.]