We continue our conversation about California’s incarcerated firefighters with a look at the women fighting the state’s climate change-fueled blazes. We speak with Amika Mota, a former prisoner firefighter. 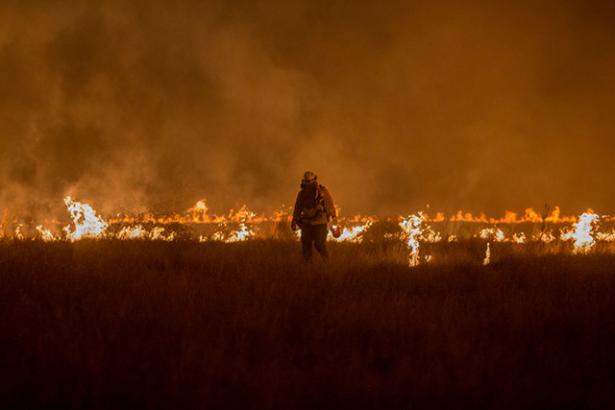 AMY GOODMAN: We are broadcasting from San Francisco, the site of this week’s Global Climate Action Summit. I’m Amy Goodman. We continue our conversation about California’s incarcerated firefighters with a look at the women fighting the state’s climate change-fueled blazes. We’re joined now by Amika Mota, former prisoner firefighter. She didn’t even make a dollar an hour while on duty as a firefighter; she made just 53 cents. Amika is now the director of prison re-entry at the Young Women’s Freedom Center in San Francisco.

AMIKA MOTA: Thank you for having me.

AMY GOODMAN: Well, I’m sure this brought back many memories for you as you saw these young men talking about their experience just yesterday and the day before, fighting fires here in California. How did you end up fighting fires in California in prison?

AMIKA MOTA: I was incarcerated. I began my prison sentence in 2008, and about five years into my sentence I became eligible for fire camp. So, I had always kind of had my eye on wanting to make it, to be a prison firefighter.

AMY GOODMAN: What makes you able to make it, to get to these prison camps?

AMIKA MOTA: So, you have to be a certain level of security clearance. And so, I started off at a level three security, and I had to work my way down into a level two. So it has to do with security risk, your supervision level, your behavior in prison and the crime that you committed to land there.

AMY GOODMAN: And so talk about where you ended up.

AMY GOODMAN: So this is different than a fire camp.

AMIKA MOTA: This is different than a fire camp, yes. Chowchilla is unique in that sense, in that they have this institutional fire department where we respond to fires that are happening inside the institution and also within a 30-mile radius of the prison.

AMY GOODMAN: So people’s homes? It might not be a wildfire?

AMIKA MOTA: People’s home. Oh, no, we do structure fires, vehicle fires, car accidents, medical calls in people’s homes. Yeah, we do a whole variety of things, so not just wildland firefighting.

AMY GOODMAN: So, what was your experience like? You’re a team of all women.

AMY GOODMAN: You go on a fire truck to someone’s house on fire.

AMIKA MOTA: Yes, yes. And we are well trained to get the job done when we’re there. You know, we’re trained up as part of our initiation into the firehouse. We do about six weeks of training of just the physical pieces of it and learning how to use the equipment and ride on the truck, all the pieces of the truck, and—

AMY GOODMAN: And where did you live?

AMIKA MOTA: We lived in a firehouse that sat right outside the prison gates. So, you know, we were looking inside to the prison the whole time. But we came home to what was called the firehouse, but we were still under supervision. We were still incarcerated and still—

AMY GOODMAN: And how much did you make fighting these fires?

AMIKA MOTA: I made about 53 cents an hour. My total check per month was about somewhere around $64, I believe, and I was one of the highest-paid at the fire department. So, the other women that I worked side by side with were making about 38 cents an hour.

AMY GOODMAN: Some might be listening and saying, “Well, wow, you got incredible training to be a firefighter.” So you get out of prison; can you become a firefighter?

AMIKA MOTA: No. I cannot become a firefighter in a municipal fire department. Most of those require EMS certifications, and as felons, we are blocked from getting that certification, although we were performing those duties while we were incarcerated. And, you know, I—

AMIKA MOTA: Well, we responded to medical calls in people’s homes. We weren’t EMS-certified, but we were first responders.

AMY GOODMAN: But explain why you can’t, this rationale of because you’re a felon. You can do it when you’re in prison.

AMY GOODMAN: But not out of prison?

AMIKA MOTA: Yes. I don’t understand that rationale. I wish I could say I did. I think that there’s occupational licensing issues that prevent us from continuing the work when we come home, and then there’s also a stigma of being a formerly incarcerated person when we come home. So, they will use us when we’re on the inside, but on the outside, I think there’s a whole different level of explaining to do when you might have somebody riding on a fire truck or responding into someone’s home, about criminal history.

AMY GOODMAN: When you had been in prison for years, and this all-woman crew goes in and saves people’s lives, saves houses, you’re putting out fires, did the homeowners, did the people you saved, did they know you were prisoners?

AMIKA MOTA: Some of them did. Some of the folks that were in the small communities next to the prison would see a fire truck full of women and know it was—the fire girls is what they called us. But most people didn’t. You know, we didn’t wear gear that distinguished us as inmate firefighters. We wore normal turnouts and wildland gear, so we looked like every other firefighter out on scene. So, responding to a car accident on Highway 99, you know, nobody would know that we were inmate firefighters.

AMY GOODMAN: Amika, how do you respond to some people saying this is slave labor? The prisons will say this is voluntary.

AMY GOODMAN: You didn’t have to fight the fire.

But, you know, I think it’s really—it was really emotional, actually, watching that, because I kept thinking, “A dollar an hour?” You know, there’s the basic things that we need to survive in prison. We need hygiene. We need deodorant and soap and coffee, or, you know, the things that we need to buy in prison that are not provided for us. Tampons is one of those. So there’s those basic costs that we need to cover while earning—you know, while working a prison job. But we also have families outside that have these expenses of the phone calls that we call home on, or the visits to come see us, taking care of our children. And we also leave with massive court fines and fees, right? And so, there is, to me, the idea that there’s no mechanism for us to kind of start righting some of those things and supporting our families and paying off the debt that we will leave with.

AMY GOODMAN: So, so many of you come from poverty, and you then learn this remarkable skill, clearly one that is so needed in California right now—

AMY GOODMAN: —with these massive climate change-fueled fires, and you are forced back into poverty afterward.

AMY GOODMAN: These are actually well-paying jobs if you are not a prisoner.

AMIKA MOTA: Right, absolutely. I think that’s a pretty devastating piece of it, is that, you know, this is an opportunity for folks coming home to have a real sustainable living wage and a career, rather than a minimum-wage job, which, you know, we’re trying to take care of our families. And so, yeah, it’s pretty devastating that we can’t come home and funnel ourselves into something that we’ve been doing, that we may love, that we may be really good at.

AMY GOODMAN: You were sometimes saving the lives and homes of the guards’ families?

AMY GOODMAN: And the idea that the California attorney general’s lawyers fought in 2014 against the release of prisoners, talking about how much money they save the state?

AMY GOODMAN: Are you trying to change the law that says that as an ex-felon you can’t be a firefighter, you can’t do the job that you were trained to do?

AMIKA MOTA: Yes, absolutely. We’ve been working on a number of bills that address occupational licensing, the EMS certification in particular, here in California. Unfortunately, that bill was gutted and has turned into a study bill at this point. And there is another bill that we’re working on that has—it’s moving forward, and that addresses kind of the the broader issue of how far back we can look at someone’s criminal history.

AMY GOODMAN: Were you surprised to hear the officers at the prison camp? I mean, you wouldn’t know this was a prison if you were driving down the road, because it said Delta Conservation Corps [sic], but it is a prison.

AMY GOODMAN: Were you surprised to hear the officers at the camp saying, “Yes, they should make more money. They are doing the most dangerous parts of this very dangerous job,” which is fighting wildfires?

AMIKA MOTA: Right. I’m not surprised, because they are the ones that see us work. They work most closely with us. They see how hard we work, and they know that there’s something wrong with that picture. We hear often that we’re the hardest workers out there.

AMY GOODMAN: Again, that place we were, that we just went to, the previous piece we did, the Delta Conservation Camp, it’s called. Now, Amika, Governor Brown appointed you to the State Advisory Committee on Juvenile Justice and Delinquency Prevention, and you’re prison re-entry director at Young Women’s Freedom Center here in San Francisco.

AMY GOODMAN: As we wrap up, talk about what you’re doing with these young women. How do you help them the most, coming from prison? And what are you doing at the state level for Governor Brown?

AMIKA MOTA: Well, we at the Young Women’s Freedom Center are building a movement across the state of California of formerly incarcerated and system-involved women and girls to work on policy and advocacy issues that directly affect us. I think that on the state advisory board, I am a voice for those women—you know, women and girls that are involved in the juvenile justice system—and so always continuing to bring voices to the table of the folks that are most impacted by these policies.

AMY GOODMAN: And congratulations on your little infant daughter, who you brought in today.

AMIKA MOTA: Thank you. Thank you so much.

AMY GOODMAN: Well, I thank you so much for being with us.

This is Democracy Now!, democracynow.org, The War and Peace Report, as we broadcast this week from the Global Climate Action Summit. We’re going to speak with the investigative reporter Antonia Juhasz about death on the Dakota Access pipeline. Stay with us.

The original content of this program is licensed under a Creative Commons Attribution-Noncommercial-No Derivative Works 3.0 United States License. Please attribute legal copies of this work to democracynow.org. Some of the work(s) that this program incorporates, however, may be separately licensed. For further information or additional permissions, contact us.
Subscribe to Portside