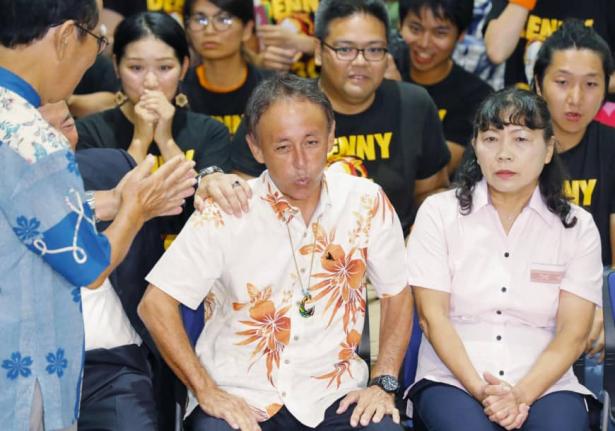 Denny Tamaki, center, the winner of the Okinawa gubernatorial race, watches the results on TV on Sunday in Naha. , KYODO

OSAKA – In a major defeat for Prime Minister Shinzo Abe and the ruling bloc, Kyodo News and other media reported Sunday evening that former Lower House member Denny Tamaki, a staunch opponent of a controversial central government-backed plan to relocate a U.S. military base, won Okinawa’s governor race over a candidate heavily backed by the ruling parties.

The last of the votes were being counted late Sunday and official results were expected by early Monday.

The 58-year-old Tamaki, who had the support of all major opposition parties, reportedly defeated 54-year-old Atsushi Sakima, a former mayor of Ginowan, which houses U.S. Marine Corps Air Station Futenma. The Futenma base is supposed to be relocated to an offshore facility in Henoko now under construction on the northern part of the main island.

“Mr. Onaga risked his life to commit to his determination, which is not to allow a new base to be built (in Okinawa). This has spread to people in Okinawa and backed” the campaign, Tamaki said after the results were announced.

Onaga died in August after a battle with cancer and after vowing to take steps to rescind permission for construction at Henoko.

Tamaki’s support base included Onaga’s “all Okinawa” coalition of traditional anti-base activists and Okinawan business leaders opposed to Henoko — but not necessarily Japan’s military alliance with the United States.

During the campaign, Tamaki made his opposition to Henoko clear. But Sakima and the ruling Liberal Democratic Party adopted a campaign strategy of avoiding discussion of Henoko and concentrating instead on the need to close Futenma as quickly as possible and on economic issues.

Senior LDP officials repeatedly flew in from Tokyo to campaign on Sakima’s behalf, even as they said the election result would not change the government’s decision to push forward with construction of the Henoko facility.

Tamaki’s first task as governor will be to decide what steps to take in regard to Okinawa’s decision to withdraw permission for the construction at Henoko. In late August, the prefecture retracted approval of landfill work, and further court battles between Tokyo and the prefecture over the issue are expected.

Tamaki and the prefectural assembly, which is opposed to Henoko, are also expected to move forward on an ordinance that would establish a prefecture-wide referendum on relocating the base to Henoko.

If approved, a referendum could take place in the spring of 2019. More than 92,000 Okinawans signed a petition calling for a referendum, and the assembly is expected to discuss the matter in October.

The weather played havoc with the election in the final days of the campaign. Typhoon Trami roared through Okinawa on Saturday, forcing candidates to suspend street campaigning the day of the election and take to the phones. Candidates and their supporters encouraged voters, especially on Okinawa’s outlying islands, to get to the voting both early to avoid the impact of the approaching typhoon.

Okinawa officials said Saturday a total of 406,984 people went to the polls for early voting between Sept. 14 and 28, a record number that represents about 35 percent of registered voters