The Exaggerated Death of American Socialism

It turns out that socialism has been a major theme in American discourse. This essay is based on The American Left: Its Impact on Politics and Society since 1900 (Edinburgh University Press) 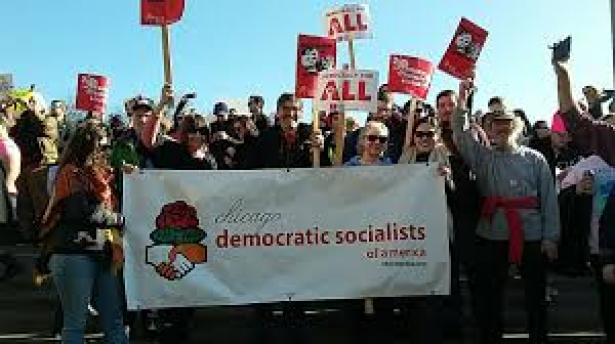 According to conventional wisdom, American socialism is dead. That it failed because America succeeded is part of the exceptionalist story of the USA. Few would agree with Norman Birnbaum that the “United States is a class society that dares not utter its own name.”[i] The word socialism is one that few politicians dare use except as a weapon of opprobrium.

Yet, there have always been some strange contradictions. The socialist mongoose has had a hypnotic effect on the great snake of American capitalism. Since the late nineteenth century, socialism has been a major component of American discourse. Some of America’s most brilliant scholars have devoted their productive years to explaining away American socialism. In being the main theme of U.S. Cold War rhetoric, anti-socialism signalled the significance of its converse.

But socialism is more than an antithetical presence. If governmental activity is one indicator of socialism, it has been increasingly evident in America. Federal and local government expenditure is an ever-expanding segment of GDP. The number of government employees has shown a similar propensity for relative growth. Public enterprizes, government-run social security, federal control of banking, trade, education, immigration and other areas of policy are at levels that, in other nations, might be taken to indicate an extensive measure of socialism.

Again, inequalities of income, wealth and opportunity, a precondition of socialism, are on the rise. According to a carefully documented 1995 study, the “gap between haves and have-nots is greater now than at any time since 1929,” with the USA being a more unequal society than “what used to be perceived as the class-ridden societies of northwestern Europe.”[ii] The widening gulf between rich and poor has stimulated an egalitarian mindset of the type that in the past has heralded further advances in governmental intervention.

This does not mean that a social upheaval is round the corner, or that there will be a surge in electoral support for formally constituted socialist parties. Nevertheless, the uncertain status of American socialism’s morbidity is a phenomenon that invites attention, and mainstream scholars have for decades shied from it. In this essay, I shall review some aspects of the vitality of USA socialism, rehearse some possible reasons for American self-denial on the subject, and address some of the consequences of that delusion.

Let’s begin with the Failure of Socialism Industry. That industry consisted of writers such as Bell, Hartz, Boorstin, and Laslett, who plausibly explained the failure of early twentieth century socialist institutions like the Socialist Party of America (SPA) and Industrial Workers of the World. They also speculated, rather less reliably, on general themes such as the absence of class consciousness in America. But they were reluctant to address the idea that socialism may have succeeded in a different sense, in terms of ideas, policy, and the organization of American society.[iii]

For obvious reasons, the Failure of Socialism Industry flourished during the Cold War. But is it not curious that this happened immediately in the wake of one of the world’s most spectacular and successful advances in social democracy, the New Deal?

The dynamism of the latter period of change may be appreciated by placing it in context. In a few respects, the United States was more egalitarian than other industrial democracies in the 1920s, notably in its provision of free, compulsory high school education on the comprehensive model. Mostly, however, the USA was until the 1930s a political backwater, lagging in social insurance provision and the government underpinning of general welfare. By the end of the 1930s, however, a huge change had taken place. To be sure, the USA still lagged in the universal provision of health services. Nevertheless, next to New Zealand, it now had the democratic world’s most advanced welfare state. What is particularly striking about all this is the speed of change. In five short years, the USA took a bigger stride toward socialism than had ever previously been taken by a democratic society in a short time span.

Rightist critics raged against the “socialism” or even “communism” of the New Deal and of the man who presided over it, Franklin D. Roosevelt. Sympathizers with the New Deal counterattacked, ridiculing these critics for their allegedly absurd views. Two factors bolstered the apparent credibility of these pro-New Dealers: the engagement of so many of them in anti-Communist Cold Warrior rhetoric from the 1940s on, and the ease with which the Republicans could be accused of resorting to the desperation of extremism in the Democrats’ decades of ascendancy.

With such ease do extremists grab the headlines, that a more moderate group’ critique of the New Deal had less impact on the historical profession. The extremists’ claim that FDR had led the USA down the road to Soviet-style Communism was doomed to fringe status. A much more plausible Republican claim was that New Deal Democrats were responsible for “creeping socialism.” This rather luridly invoked the image of guilty plotters who advanced with un-American stealth; at the same time it not unreasonably indicated the presence of an unseen phenomenon.

The standard bearer for this moderate Republican critique was the presidential aspirant, Senator Robert A. Taft. Setting the agenda for the 1950 mid-term elections, Taft charged that the Fair Dealers, successors to the 1930s New Dealers, were taking the USA down the “British road” to socialism. He had in mind the achievement of socialism by gradual and democratic means, or Fabianism. He warned that “the only way to avoid a creeping socialism is to elect a Republican Congress in 1950 and a Republican Congress in 1950.”[iv]

Senator Taft’s mistake was not to inflate the dangers of socialism, but to underestimate the degree to which the socialist policies he condemned had taken hold of the mind of the American voter. In contrast, his nemesis as Republican leader and President, General Dwight D. Eisenhower, realized that the welfare state had become a beloved fixture of the political scene, and made no attempt to undo the social engineering of the 1930s. And under his successor, President Lyndon B. Johnson, federal regulatory activity surged forward once again.

Figures on government spending help to illustrate not only the longterm trend, but also its changing nature. It increased at a rate of 5.4 percent per year from 1902 to 1932, but at 7 percent from 1932 to 1970. However, if military spending is removed, the rate of increase in the residual civilian spending is, while still remorselessly present, smaller -- it declines from 5.6 percent to 5.3 percent.[v] Bipartisan support for booming federal expenditure has come about in part for military reasons, whether strategic or pork-barrelling. The political scientist Anne Norton argues that, at the dawn of the twenty-first century, “American conservatism embraced big government with a vengeance.” Formerly opponents of state enlargement, conservatives now demanded more powers for the government.[vi] Under Presidents Reagan and Bush the younger, there were attempts to scale down the operations of the U.S. welfare state. However, the embracing of government for one purpose but not another marked a dilution of anti-federalist principles. In practice, a Faustian bargain existed -- if you tolerate my military, I won’t dismantle your welfare socialism.

Perhaps a significant footnote to all this is the survival of socialist activity. Janet Rosalie Jagan (née Rosenberg), a socialist from Chicago, was in 1997 elected President of Guyana, the first and only American woman ever to lead a nation. And there is the continuing socialist presence on Congress. Only Victor Berger and Meyer London sat explicitly as socialists -- they were both SPA candidates. However, under a variety of labels and with greater or lesser degrees of certainty, a number of others have since the SPA’s heyday displayed socialist qualities or declared their socialist beliefs. They include Thomas R. Amlie, Gerald J. Boileau, H. Jerry Voorhis, Maury Maverick, Fiorello H. LaGuardia and Vito Marcantonio. Former Chairman of the House Armes Services Committee Ron Dellums became Vice Chairman of a new grouping formed in 1982, the Democratic Socialists of America (DSA). Congressman Major Owens was also a DSA member. The socialist Bernard Sanders served in the House until, in 2006, he achieved election to the Senate. Socialist representation on Capitol Hill has been too limited to allow a challenge to the view that socialism has failed institutionally, but it remains a nagging, if understudied presence.[vii]

Socialism has been a major theme in American discourse; moderate conservatives have made a perfectly reasonable case for their view that it is a “creeping” phenomenon in the United States; while problems of definition remain, there is ample evidence of the presence of socialism in American life. So, why has America been in such a state of denial about it?

There has been such an obsession with explaining the failure of socialism that the phenomenon of socialism without a name has not come under close scrutiny. Why is this? The explanatory mix contains various ingredients. The relative absence of socialists from Congress has lulled people into a state of incuriosity. The Cold War identified socialism, in its Communist guise, as the enemy. At home, this encouraged not just anti-communism, but the delusion that America had no socialist characteristics. In America the media, and to a large degree academia, are the servants of commercial interests. The result, notwithstanding the Right’s protestation to the contrary, has been a sometimes deliberate, sometimes unwitting bias against the Left. The commercial pressure has also contributed to a tendency to be “in denial” about such American socialism as does exist.[viii]

To be in denial is to court consequences. Considering itself to have no socialist characteristics, America domestically is in a weak position to address increasing wealth polarization, and to plan for major economic changes such as those needed to meet the threat to the environment. In foreign policy, America is susceptible to exceptionalist assumptions. In the name of those assumptions but also violating exceptionalism by making it a template, it attempts to impose anti-Left policies on the world.

[viii] John Earl Haynes and Harvey Klehr have used the phrase “in denial” in a different sense, to indicate that the dewy-eyed “progressives” who dominate the U.S. academy refuse to accept the evils of Stalinism and Soviet espionage, and still dream of a utopian, left-wing America. If they do continue to be in denial in that sense, though, perhaps they are doubly in denial, in not realizing that socialism, if in modified form, has already arrived. See Haynes and Klehr, In Denial: Historians, Communism and Espionage (San Francisco: Encounter Books, 2003), pp. 7-8, 231-32.