May 7, 2020 Jennifer Szalai The New York Times
Printer friendly
The Unlikely Life of a Socialist Activist Resonates a Century Later Published May 7, 2020 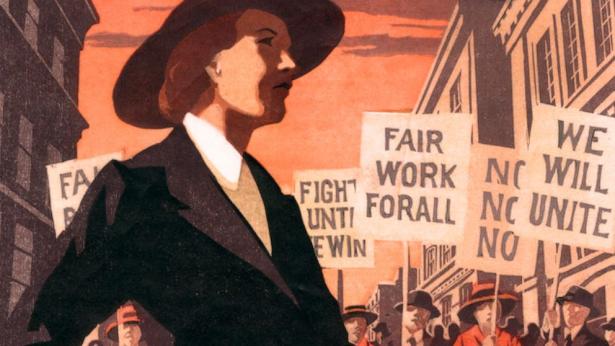 She was an impoverished Jewish immigrant from Russia who had started working in a cigar factory at the age of 11; he was the scion of an old-money Episcopalian family who enjoyed a mansion on Madison Avenue and a weekend house with a bowling alley.

When Rose Pastor married James Graham Phelps Stokes on the shores of Connecticut in 1905, the couple insisted on omitting the word “obey” from the ceremony. They became active members in the Socialist Party, lending their support to a labor movement under siege during a time of widening inequality.

Rose’s socialist commitments were seamlessly aligned with her life experience; Graham’s were more surprising, but he took to them with the ardor of a convert. Writing to his “darling Mother,” who like many women of her station put a lot of stock in her own charitable deeds, he asked whether she “recognized the injustice of the system which provides you with your great income at the expense of others; and whether you recognized the relation between this system and the terribly widespread suffering which you endeavor so earnestly to relieve.”

In “Rebel Cinderella,” Adam Hochschild writes movingly about an unlikely pair who also served as a potent symbol. The public was so fascinated by the couple that some Americans kept scrapbooks documenting Rose’s fairy-tale ascent. For several years, she was mentioned in the press more than any other American woman. Hochschild notes that as the Gilded Age yielded to the Progressive Era, Rose and Graham seemed like the ideal embodiment of socialist ambitions: “What could better symbolize the hope of human brotherhood than such a marriage of rich and poor, native-born and immigrant, Gentile and Jew?”

Hochschild is a superb writer who makes light work of heavy subjects, having published books about the conflagration of World War I and the brutal colonialism of Belgium’s King Leopold II. In “Rebel Cinderella,” he brings his roving curiosity to bear on a figure whose public life coincided with the roiling decades of the early 20th century, with its grotesque economic disparity, vicious anti-Semitism, seething white nationalism and swelling anti-immigrant fervor. The time of upheaval that he writes about bears an unnerving resemblance to our own.

The name Rose Pastor Stokes may no longer be familiar, but Hochschild found plenty of newspaper clippings in his research, along with thousands of letters, unpublished memoirs, Rose’s diary and even reports detailing the surveillance of her by the predecessor of the F.B.I. Unearthing some mournful poetry Rose wrote about her time in the cigar factory, Hochschild corroborates her grim portrait with notes made by a factory inspector. Where information is scant or nonexistent, he deploys elegant workarounds that evoke a vivid sense of time and place. About Graham’s bachelor years before meeting Rose, he writes: “For unmarried men of his class and time, any sexual experience was likely to be furtive and paid for.”

When Rose met Graham she was working as a reporter for The Jewish Daily News (a job she was offered after writing an occasional column about factory life), living on the Lower East Side as the sole breadwinner in a household that included four of her younger siblings and their mother. Graham had a medical degree and was living in settlement housing, where the wealthy lived alongside the poor, which appealed to his sense of noblesse oblige. He was charmed by her, recounting in a letter how much he enjoyed her 25th birthday, when she invited him to her humble apartment and offered him a glass of milk, bread and butter, an egg and a banana. She was charmed by him, too, recalling years later that he had reminded her of “the young Abe Lincoln.”

They embarked on a partnership that was remarkable — at least at first. His ample funds afforded a material security that allowed them to devote all of their time to the socialist cause. Rose proved to be a charismatic orator, holding forth with the exuberance and volume that were essential before the advent of loudspeakers and mics. She would eventually take to writing plays, believing they were a tool for justice, and she had an instinct for theatrical gestures. During a restaurant workers’ strike, she suggested putting salt in the sugar bowls and replacing the drinking water with vinegar.

As Rose was flourishing, though, Graham seemed to languish, and a little more than halfway through “Rebel Cinderella,” Hochschild foreshadows a dark turn. Graham had started a book on the Founding Fathers but never finished it, and ran for elected office several times without success. He was never as popular a speaker as his wife, and would get petulant when she had been away for what he felt was too long. But he could be petulant when Rose was at home, too, accusing her of “loafing” when she was convalescing from bronchitis. “The terrible loneliness of one’s soul in such moments!” she confided in her diary.

World War I was the external shock that did in their marriage, as Graham began supporting American involvement in the war and even sent letters to the State Department to name former comrades he suspected of being German agents. Rose initially sided with Graham, but she soon recoiled. She felt like she was betraying her own class and ideals, and was particularly disturbed by an invitation to visit the White House, or “the seat of Capitalist power,” as she put it. “What is wrong with me that I elicit such an invitation?”

Hochschild suggests that Rose’s story should speak to us because in our new Gilded Age, “the appeal of making that magical leap from poverty to great affluence is once again resurgent.” But the parallels, as he acknowledges, aren’t exact. The Cinderella scenario seems hopelessly retrograde — not to mention that a social safety net, however fraying, exists largely because of efforts by agitators like Rose. Hochschild’s book shows us what a radical movement looked like from the inside, with all of its high-flown idealism and personal intrigues. Whatever protections we take for granted once seemed unfathomable before they became real.

Biographer Adam Hochschild is s an American author, journalist, historian and lecturer. His best-known works include King Leopold's Ghost (1998), To End All Wars: A Story of Loyalty and Rebellion, 1914–1918 (2011), Bury the Chains (2005), The Mirror at Midnight (1990), The Unquiet Ghost (1994), and Spain in Our Hearts (2016). His writing has also appeared in the New Yorker, Harper's Magazine, The Atlantic, Granta, the Times Literary Supplement, the New York Review of Books, the New York Times Magazine, The Nation and other venues.. He was also a commentator on National Public Radio's All Things Considered.

[Essayist Jennifer Ildiko Szalai has been the New York Times nonfiction critic since 2017.  Formerly an editor at its Sunday Book Review section and an erstwhile senior editor at Harper’s Magazine who also had a stint on the op-ed page of The Times, Jennifer is a graduate of the University of Toronto, where she studied political science and peace and conflict studies, and the London School of Economics, where she received a master’s in international relations. Jennifer has taught journalism and criticism at Columbia and NYU. Her work has appeared in The Times Magazine, Harper’s, The Economist, New York Magazine, Slate, The Nation, The New Statesman, The New Yorker online and The London Review of Books.]