As Bernie Sanders has emerged as the frontrunner for the Democratic presidential nomination, his insistence that he is a democratic socialist is a dealbreaker for many voters and pundits. What does socialism mean in the context of modern America... 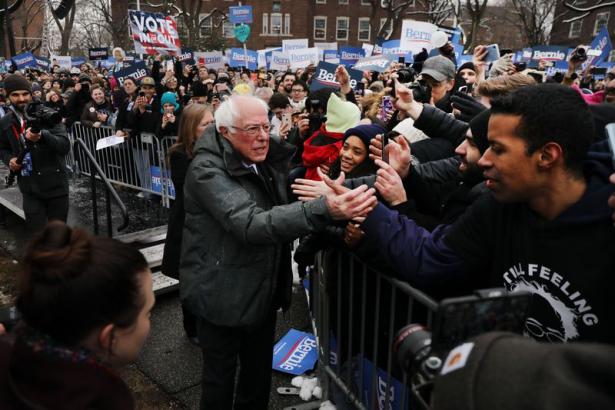 An honest answer to this question is not what you might think, and it’s not what we’ve been hearing from Sanders’ opponents.

In the Nevada debate, Mike Bloomberg equated Sanders’ socialism with communism. “Other countries tried that,” he said, “and it just didn’t work.” Paul Krugman made a contrary argument when he declared “Sanders isn’t actually a socialist in any normal sense of the term,” but rather “What the Europeans would call a social democrat.” Others have described him as a New Deal liberal. Sanders himself, in the face of fierce criticism from Republicans and Democratic centrists alike, has refused to budge, pointing to Denmark, rather than the Soviet Union, as the embodiment of his ideal.

The confusion about Sanders’ politics reflects a false assumption that there is a sharp line between liberalism and socialism. In the history of the United States, that has not been the case. Rather, the divide between them often has been porous, as ideas, language and programs flowed fairly freely from one to another. Some of the most successful instances of American reform, especially in New York, have come from the fusing of socialist and liberal ideas in a variety of hybrid forms.

In the first decades of the 20th century, scores of cities and states set up publicly owned power systems, trolley lines, water systems, markets, grain elevators and, in the case of North Dakota, a state-owned bank that still operates today. At the end of World War I, Congress even debated nationalizing the entire railroad system. A few political leaders who advocated such measures called themselves socialists, but many more called themselves progressives or simply Democrats or Republicans.

The New Deal, sometimes portrayed as an effort to save capitalism, included a myriad of programs that would fit the socialist label, from the Tennessee Valley Authority and the Bonneville Power Administration, with their massive government-owned dams, generating plants and power distribution systems, to the direct government employment of millions of workers in infrastructure, conservation and arts projects, to the creation of a government-run social welfare system.

Bernie Sanders knows well the intermingling of socialism and liberalism, for he grew up in what was perhaps its greatest example, mid-20th-century New York. From the 1930s through the 1960s, New York City created an extraordinary array of institutions and programs to serve its residents that combined government action with private and philanthropic efforts, the kind of social democratic polity — or, as Sanders prefers, democratic socialism — that lies at the core of his program. The New York of Sanders’ youth showed how much could be accomplished with an expansive notion of government responsibility combined with a democratic ethos.

Growing up in Midwood, Brooklyn, in the 1940s and 50s, Sanders had the freedom that millions of New Yorkers had as a result of a low-cost, publicly-run transit system. The subways, els and trolleys opened up the wealth of urban experience to everyone, from Coney Island and Brighton Beach, where Bernie and his older brother Larry liked to visit, to the museums of Manhattan, to the parklands and public pools that dotted the metropolis.

The transit system had not always been public; originally the subways and els had been for-profit operations, run by the Interborough Rapid Transit and Brooklyn-Manhattan Transit companies. But in 1940 Mayor Fiorello La Guardia took them over and merged them with the small city-run Independent system to create the transit system we still have. Public pressure kept the fare low, just five cents until 1948, the equivalent of 54 cents today.

Money was an issue in the Sanders household, which struggled on the earnings of Bernie’s father, Eli, a paint salesman. But having a rent-controlled apartment allowed the family to live a decent if not luxurious existence. Controversial then and now, rent control represents a recognition of the need to regulate the marketplace, a statement that the rights of property need to be subsumed to the social needs of the population; not necessarily socialism, but not exactly “free enterprise” either.

Both the Sanders brothers went to public schools and then Brooklyn College, Larry graduating, Bernie just for the 1959-60 academic year, before transferring to the University of Chicago after his mother’s death. Brooklyn College, like City, Hunter and Queens colleges, offered free higher education to New Yorkers unable to attend private colleges because of financial barriers or racial and religious discrimination.

These schools, now part of the 25-campus City University, provided an extraordinary path to upward mobility — and a broadening liberal arts education — for generations of city residents. When, at a March 2019 rally at Brooklyn College that launched his current campaign, Sanders pledged “to make public colleges and universities tuition-free,” he was calling not for an impossible dream but for an opportunity he himself had had.

The free colleges were part of an extensive web of public institutions in the city Sanders grew up in. In 1950, New York City had 22 municipal hospitals, built to make sure no resident went without needed medical care, along with a string of public health clinics and health services for children in the schools.

New York was then in midst of building out its public housing system, using city money for projects aimed at working-class New Yorkers who made too much money to qualify for federally-funded public housing. By the early 1970s, well over a half-million New Yorkers lived in government-owned housing. Today public housing is in the news largely for severe problems of deterioration, but initially it presented an attractive alternative to the run-down tenements its residents left.

Kareem Abdul-Jabbar, who grew up in Dyckman Houses in upper Manhattan, one of the city-funded projects, fondly remembered it as a “little multinational enclave.” New York City and state also subsidized the construction of tens of thousands of units of non-profit cooperative housing, like Penn South and Co-Op City, through reduced taxes and low-cost mortgages.

The strength of New York’s social democracy lay in its complex interweaving of public and private resources. LaGuardia, in particular, favored this approach. When in 1942 New York City found itself in possession of the Shriners Temple on 55th St. as a result of a tax default, LaGuardia, with support from labor unions and the arts community, created the non-profit City Center for Music and Drama “to meet the demand for cultural entertainment at reasonable prices.”

The New York City Opera and the New York City Ballet began as its in-house companies. The City Opera featured an African-American singer in a leading part a full decade before the Metropolitan Opera, an expression of the democratic spirit that animated the whole endeavor.

Similarly, in 1944 LaGuardia sparked the creation of the pioneer, non-profit Health Insurance Plan of Greater New York (HIP), ensuring its success by agreeing to pay half the cost of a combined HIP-Blue Cross package for any municipal employee who wanted to sign up.

Some government-linked services in New York were unusual, like City Center and HIP, but others were near-universal across the country, like free schools and libraries, public parks and, since 1965, low-cost health care through Medicare and Medicaid.

When first proposed, such programs often sparked controversy. In New York State, back in the 1830s, the short-lived Working Men’s Party made free public education one of its main demands, while after the Civil War, one of the major efforts by newly-enfranchised black voters in the South was to create public schools, hospitals and colleges they could use, in both cases sparking considerable resistance.

But once in place, government institutions and services get taken for granted, no longer seen as intrusions by the state into the private sector. Many New Yorkers would be surprised to learn that in much of the country people have to pay for garbage pickup by private companies, as free public sanitation service has long been the norm in the city.

The social democratic New York of Sanders’ youth was created by an ever-shifting coalition of socialists, communists (in 1945 New Yorkers elected two members of the Communist Party to the City Council), liberals, unionists, progressive professionals, Democrats and Republicans (most notably, LaGuardia).

Rarely did institutions like the free colleges or public housing or the city-owned radio station, WNYC, get labeled socialist, usually given blander designations, less likely to incite opposition. New York did not take over or compete with private productive facilities, but through regulatory action, government-provided services and government-aided non-profits, it promoted an expansive version of democracy that extended deep into the economic sphere.

Government programs cost money, and since the 1970s fiscal crisis, New York has seen cutbacks in public services in the face of budget pressures and conservative criticism. Public hospitals have been closed, recreation programs reduced and transit fares hiked again and again. But for the most part, New Yorkers continue to benefit from the creative fusing of liberal and socialist ideas during the years Bernie Sanders was growing up, from City Center, still going strong, to public housing, with its massive waiting list, to City University, now with well over a quarter-million students.

Mid-20th-century New York had serious flaws, including poverty, economic inequality (though not as bad as today), and racial and gender discrimination. But it stands as an example of what can be done when the power of government is combined with a capacious vision of human rights, equality, and democracy. It is this that Bernie Sanders refers to when he calls himself a “democratic socialist.” We could do a lot worse.

[Joshua Freeman is distinguished professor at Queens College, CUNY, and author of “Behemoth: A History of the Factory and the Making of the Modern World.”]