Persistently large wealth inequality leaves many African-Americans--as well as Latinos and some parts of the Asian-American communities--in a very precarious economic situation and poorly prepared for retirement. 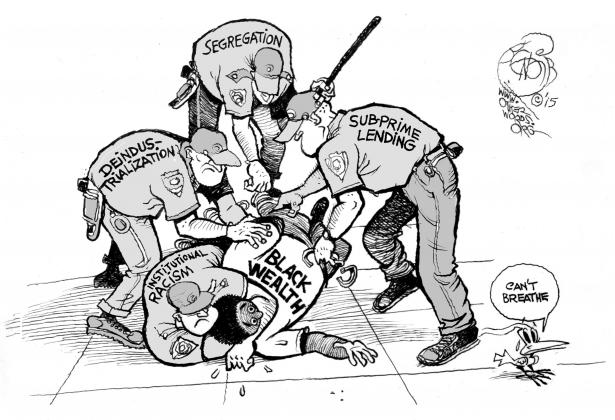 Wealth is very unevenly distributed by race and ethnicity and it will take big changes such as reinvigorating the labor movement to shrink this gap.African-Americans, for instance, have about one-tenth the wealth of whites. This massive inequality leaves larger shares of the African-American as well as Latinos and Asian-American populations worse prepared for retirement than is the case for whites.

Leveling the playing field, so that all have a shot at a decent retirement, regardless of their race and ethnicity, will require changing the rules of the game. This is especially true in the labor market. Having a well-paying, stable job with decent benefits is often a key step to building wealth. Good pay in a stable job makes it easier for people to qualify for a mortgage, for example, than would be the case with less pay or greater job insecurity. And decent retirement and health benefits through an employer allows people to put more money aside for the future.

African-Americans, Latinos and many parts of the Asian-American community face greater obstacles to such good jobs, though. They encounter outright discrimination, but also systematic hurdles. These include, but are not limited to lower quality schools, poorer transportation options that make it harder to get to a job, higher cost mortgages that lead to residential segregation and less access to jobs. As a result, unemployment rates are higher for many communities of color than is the case for whites. Wages are lower and job instability is more widespread. Worse labor market outcomes then translate into less wealth.

This leads to one clear policy implication. Shrinking the racial wealth gap will require better access to good jobs -- with the help of targeted policy interventions -- for communities of color.

The lower wealth gap among union members by race and ethnicity follows from a number of factors that are directly related to their jobs. African-Americans, Latinos, and other people of color stand to gain more in terms of higher wages, greater job stability, and better benefits from a union than is the case for whites. This follows mainly because communities of color often work in much worse jobs than whites do. Since union membership serves to level up the playing field, the jump in job quality is more pronounced for people of color than for whites. That is, all workers gain something from joining a union, but those gains are larger for people of color because their alternative without a union is worse than it is for whites.

A substantial wealth gap would remain even with more widespread union membership, but it would be a meaningful step in the right direction. Persistently large wealth inequality leaves many African-Americans, Latinos and some parts of the Asian-American communities in a very precarious economic situation and poorly prepared for retirement. Shrinking that wealth gap will require influential institutions to create a level playing field, especially in the labor market. Increased union membership is one such institution proven to lift up all workers.