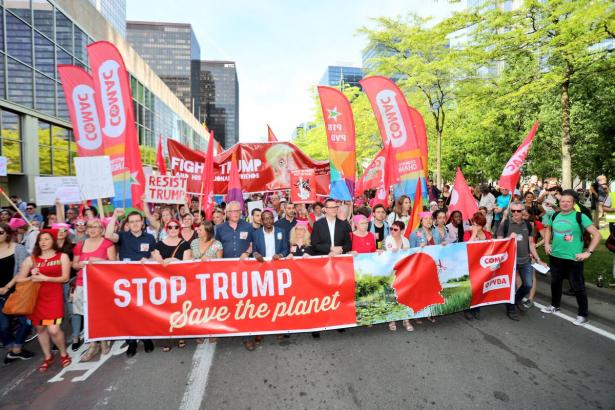 Belgian Workers' Party on the march in May 2017,Photo Solidaire

__________
Mexico: AMLO Speaks Up For Rights of Honduran Migrants Caravan

The President-elect of Mexico Andres Manuel Lopez Obrador (AMLO) will ask the governments of the United States and Canada to allocate resources to boost development in Central America which he says would help control migratory crises.

In Brussels, the Ecolo/Groen party registered historical gains, coming first or second in several local councils, including Ixelles and Forest, where it displaced the ruling socialist party. The leftist PTB (Workers' Party) was the other big winner.

The past year has seen a snowballing women's movement in the traditionally conservative Korean society.

__________
Antiprogressivism: A Specter Haunting the Americas

The fascistic values of Jair Bolsonaro go far beyond Brazil, and it is up to the Left to devise new alternatives.

__________
European Left Leader: All Leftwing and Progressive Parties Must Oppose Rise of Far-Right

Party of the European Left leader Gregor Gysi says that the conservatives in Europe are in crisis and social democrats have “largely faded into insignificance” and it was time to offer Europeans “common economic, social, democratic and peaceful future”.