Trump says that he is abandoning the INF treaty, basically confirms a renewed arms race, and absolves himself from any responsibility to lead efforts to reduce nuclear tensions around the globe. 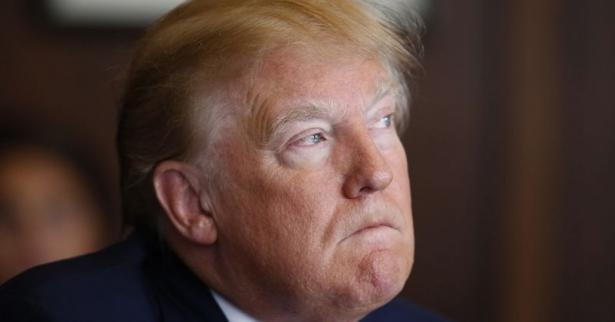 Concerns are mounting after President Donald Trump confirmed on Saturday that he will withdraw from a Cold War-era nuclear arms control treaty with Russia following reports that National Security Adviser John Bolton had been pushing the plan behind closed doors despite warnings from experts that ditching the agreement "would be reckless and stupid."

The Guardian had reported Friday that Bolton and an ally in the White House have been working to convince members of the administration to support the United States withdrawing from the 1987 Intermediate-range Nuclear Forces treaty (INF) on the grounds that Russia is violating it. Nuclear arms control experts and others rapidly responded with alarm. Many agreed that Russia's alleged violation "merits a strong response" but noted a withdrawal could alienate European allies and raise the chances of armed conflict.

The president's comments on Saturday spurred more alarm, with Daryl Kimball of the Arms Control Association calling the looming withdrawal "an epic mistake." 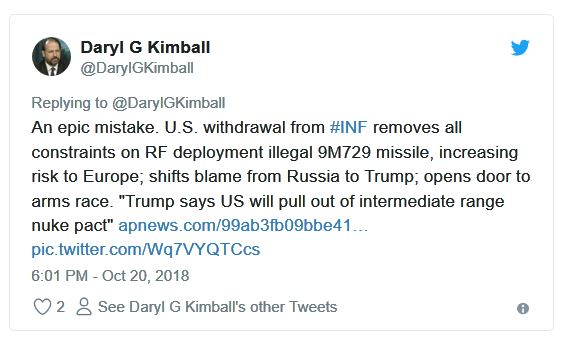 Jeffrey Lewis, the director of the East Asia nonproliferation program at the Middlebury Institute of International Studies at Monterey agreed. "This is a colossal mistake," he told the Guardian. "I doubt very much that the U.S. will deploy much that would have been prohibited by the treaty. Russia, though, will go gangbusters."

"By declaring he will leave the INF Treaty, President Trump has shown himself to be a demolition man who has no ability to build real security," responded Beatrice Fihn, executive director of the International Campaign to Abolish Nuclear Weapons. "Instead, by blowing up nuclear treaties he is taking the U.S. down a trillion dollar road to a new nuclear arms race."

Journalist Glenn Greenwald tied the update to broader narratives about the Trump administration's relationship with Russia, and in particular President Vladimir Putin: 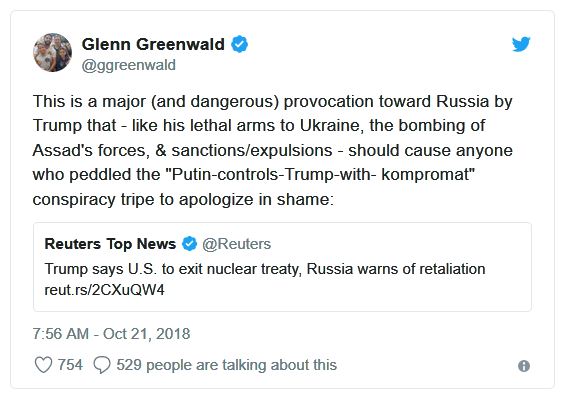 Trump revealed his withdrawal plans to reporters after campaign event in Nevada on Saturday. "Russia has violated the agreement. They've been violating it for many years. I don't know why President [Barack] Obama didn't negotiate or pull out," he said. "And we're not going to let them violate a nuclear agreement and go out and do weapons [while] we're not allowed to."

"This administration has damaged, perhaps irreparably, an int'l order that has served U.S. interests for decades, turned a blind eye to catastrophic climate change, corroded our govt, [and] poisoned our national discourse. Now it will ask you to fund a nuclear arms race. #VoteThemOut"
—Alexandra Bell, Center for Arms Control and Non-Proliferation

While claiming he would be receptive if both Russia and China concluded, "'Let's all of us get smart and let's none of us develop those weapons," under current circumstances, Trump appears hellbent on making more weapons. "If Russia's doing it and if China's doing it and we're adhering to the agreement, that's unacceptable," he said. "So we have a tremendous amount of money to play with with our military."

"We are going to terminate the agreement and we are going to develop the weapons. If we get smart and if others get smart, and say 'Let's not develop these horrible nuclear weapons,' I would be extremely happy with that," he added. "But as long as somebody's violating that agreement then we're not going to be the only ones to adhere to it."

The signing of the INF treaty during the nuclear arms race of the Cold War, as CNN pointed out, had "marked a watershed agreement." It required both Russia and the United States to eliminate ground-launched ballistic and cruise missiles with ranges between 300 and 3,400 miles.

The treaty "wasn't designed to solve all of our problems with the Soviet Union," but was "designed to provide a measure of some strategic stability on the continent of Europe," explained former State Department spokesman Rear Adm. John Kirby, now a CNN military and diplomatic analyst. "I suspect our European allies right now are none too happy about hearing that President Trump intends to pull out of it."

Kingston Reif of the Arms Control Association outlined in a pair of tweets the impact a withdrawal could have on American foreign relations: 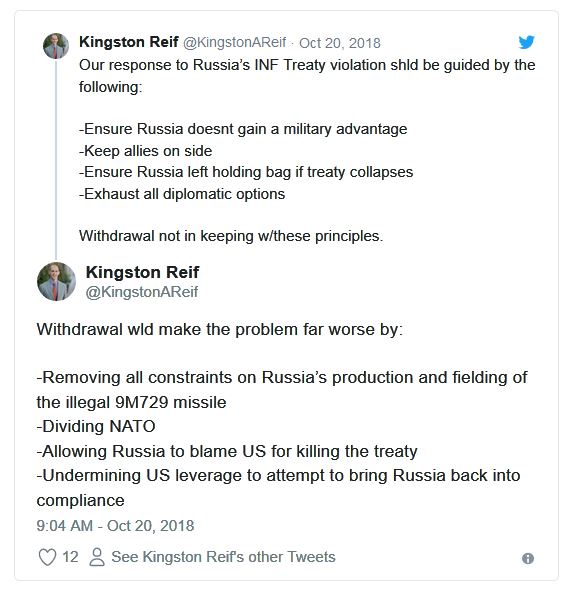 And thanks to the president's warmonger of a national security adviser, the INF treaty isn't the only arms control agreement with Russia currently under threat of termination. As the Guardian reported:

Bolton and the top arms control adviser in the National Security Council (NSC), Tim Morrison, are also opposed to the extension of another major pillar of arms control, the 2010 New Start agreement with Russia, which limited the number of deployed strategic warheads on either side to 1,550. That agreement, signed by Barack Obama and Dmitri Medvedev, then president of Russia, is due to expire in 2021.

"This is the most severe crisis in nuclear arms control since the 1980s," said Malcolm Chalmers, the deputy director general of the Royal United Services Institute. "If the INF treaty collapses, and with the New Start treaty on strategic arms due to expire in 2021, the world could be left without any limits on the nuclear arsenals of nuclear states for the first time since 1972."

Responding to the developments in a series of tweets, Alexandra Bell, a former senior arms control official at the State Department who is now at the Center for Arms Control and Non-Proliferation, said: "Trump says that he is abandoning the INF treaty, basically confirms a renewed arms race, and absolves himself from any responsibility to lead efforts to reduce nuclear tensions around the globe."

"This administration has damaged, perhaps irreparably, an int'l order that has served U.S. interests for decades, turned a blind eye to catastrophic climate change, corroded our govt, [and] poisoned our national discourse," she added. "Now it will ask you to fund a nuclear arms race. #VoteThemOut"