Apropos Those Bombs: Netanyahu Says He Had Nothing to Do with Rabin's Assassination

The more a leader stokes the hate, the less he can claim that he couldn't have imagined the results. 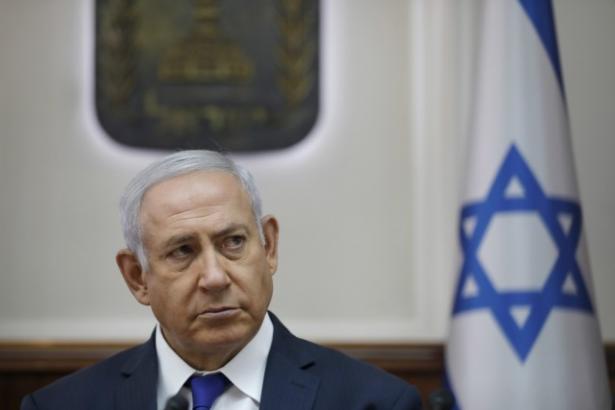 “If the campaign of incitement and vilification against anyone who disagrees with your views does not stop, blood will be spilled here. ... There is a deep division and you, elected leaders, have the power to end it.”

Those words were spoken in Hebrew at the beginning of this week. They were not intended as a comment on the bombs that had not yet been discovered in the mail in America. Unintentionally, though, they provide commentary on the responsibility for violence by the supposed lone extremist.

The words come from Noa Rothman, granddaughter of Yitzhak Rabin. She was speaking at the state memorial ceremony for the prime minister who was assassinated 23 years ago. The “you” to whom she referred to Prime Minister Benjamin Netanyahu, who was present to hear her, and more widely to his political camp.

Netanyahu and his loyalists were terribly offended. Quite a few reporters, more practiced at “balance” than at the pursuit of truth, colored their stories with shock that Rothman took a supposedly partisan tone at a state event traditionally above politics. Afterward, the annual debate about Rabin's murder at the hands of a right-wing assassin took a more surreal tone than ever.

Part of the problem is that the assassination was several crimes in one. It was the murder of the nation's elected leader. At the same time, it was the murder of the leader of a party and a larger political camp, and the goal was to destroy his policy of making peace with the Palestinians—a policy that would have led to Israel withdrawing from most, perhaps all, of the West Bank. The assassin believed that giving up land was treason and that Rabin was a traitor. So the crime was also a bid to determine national policy by force and violence.

The extent to which the assassin succeeded in that goal is uncertain since we do not know what would have happened if Rabin had lived. What we do know is that his much less popular successor, Shimon Peres, lost the election six months later by a thin margin, and that Netanyahu became prime minister for his first time. More than once at that time, I heard people recite the biblical verse, originally a prophetic rebuke of an evil king, “Have you murdered and also inherited?”

This was over the top. Netanyahu did not shoot Rabin. A single gunman of more extreme views had acted on his own.

And yet, not entirely on his own. The right-wing rhetoric against Rabin, and the demonstrations against him, grew ever more ferocious from the moment the Oslo Accord was announced in 1993. Netanyahu was a constant voice, a constant presence. He opposed Rabin's policy in principle—but he also expected to gain power by riding the wave of anger. At the last major demonstration, shortly before Rabin was murdered, Netanyahu and other Likud leaders appeared on a balcony in downtown Jerusalem before a crowd from which the chant, “Death to Rabin” could be heard.

Netanyahu can cite rare moments during those two terrible years when—none too forcefully—he asked a crowd to calm down. But he kept coming. His rhetoric fed the fury, and mass fury provided one young extremist with the confidence that he'd be a hero for murdering Rabin.

The more a leader stokes the hate, the more he uses it to gain or keep power, the less he can claim that he couldn't have imagined the results.

As a starting point for discussion, a whole political camp is not in principle guilty of the excess of its most extreme radical elements. Yet the more the mass joy of hatred becomes the norm, the greater the chance that someone will act rather than shout. The more a leader stokes the hate, the more he uses it to gain or keep power, the less he can claim that he couldn't have imagined the results.

Netanyahu, the Likud, and the Israeli right as a whole would like to evade the calculus of responsibility. Forced to commemorate Rabin, they'd rather keep the conversation “above politics.”

They might get away with it, but for their ongoing behavior. Ever since his first election victory, Netanyahu has treated criticism of himself or of the right's policies as a betrayal of the nation. He has transformed the word “left” into a synonym for treason, and “media” into a synonym for “left.” He has happily adopted Donald Trump's "fake news" label for virtually every major outlet in Israel except for the Fox equivalents that exist to glorify him. The legislative attacks by him and his allies against dissent are too many to list here. Noa Rothman's warning of potential bloodshed is as necessary and accurate as the health warnings on a pack of cigarettes—and even less likely to alter the addict's behavior.

In response to the renewed uproar about Rabin, Netanyahu's loyalists seek to erase the past and distort the present. His chief attack dog, Culture Minister Miri Regev, said in a radio interview this week that at the time of the assassination, “I don't think there was incitement by the right. I think that today we see incitement by the left against us.”

By a coincidence of timing, in the midst of this debate news came of bombs being sent to precisely the people whom Trump most demonizes. Trump isn't guilty in the legal sense. Prima facie, he is responsible in the political sense.

He will learn nothing from this, but will continue calling himself the victim. His lackeys will immediately begin trying to edit memory to erase his role. I've seen the earlier version of this movie. The remake in English is no less terrifying than the Hebrew original.

Gershom Gorenberg is a senior correspondent for The Prospect. He is the author of The Unmaking of Israel, of The Accidental Empire: Israel and the Birth of the Settlements, 1967-1977 and of The End of Days: Fundamentalism and the Struggle for the Temple Mount. He blogs at South Jerusalem. Follow @GershomG.

Independent, fact-based journalism is more important than ever. As a nonprofit, The American Prospect relies on donors like you to help us maintain journalistic integrity and provide strategic solutions to our nation's most pressing problems.  As a regular Prospect reader, you know the difference our magazine and website make in explaining the deeper currents of American politics and economics. We appreciate your support of The American Prospect's influential brand of progressive journalism.

Make a one-time gift or a monthly contribution here. Thank you for your support.