...I would argue far right white nationalists began their latest killing spree in the Obama years with the 2009 killing at the U.S. Holocaust Museum. 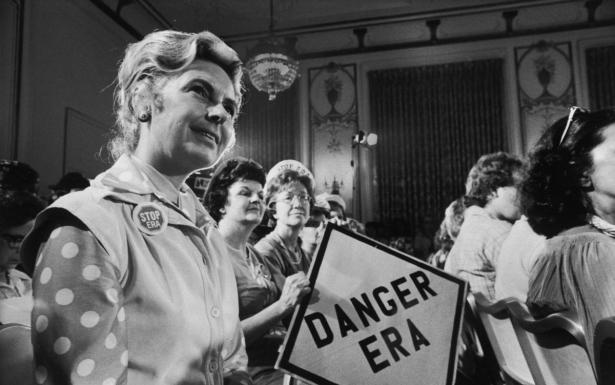 Phyllis Schlafly and others sit in the audience during a government hearing to voice their opposition to the passage of the Equal Rights Amendment, Kansas City, Missouri, August 10, 1976. , Bill Pierce/The LIFE Images Collection/Getty Images

I learned to peer beyond my political bubble in the early 1980s, first when Ronald Reagan was elected president and destroyed the New Deal coalition in which I was raised and then when Phyllis Schlafly’s Stop ERA women indeed stopped the Equal Rights Amendment for women from becoming the law of the land by defeating those of us fighting to win its passage in the Illinois legislature. We needed one more state for the Constitutional Amendment to be enacted, and Illinois was one of three where we had a chance. On the steps of the Springfield, Illinois, capital were white women with lacquered hair wearing skirt suits and beige stockings carrying red Stop ERA signs. They seemed to have stepped out of the past, so how could they stop the forward march of history?

Well, they did. I found out later many were part of a resurging right-wing Christian movement. And I learned the hard way that you have to understand who your political opponents are and not take them for granted in your own righteousness. I ended up researching a doctoral dissertation about right-wing and liberal women in conflict over fundamental questions about U.S. life and governance during the conspiratorial red-baiting era after World War II and during McCarthyism in the 1950s.

McCarthyism took place during the Korean War when Democrat Harry Truman was president. Wisconsin Senator Joseph McCarthy’s fellow Republicans were happy to go along with his outrageous, made-up stories about subversives in the State Department or wherever to try to capture the power that they lost during the major political realignment of the New Deal in the 1930s—particularly the right-wing, isolationist Republicans led by Robert Taft who wanted to dismantle Social Security, the National Labor Relations Act and Keynesian management of the economy.  The moderate Republicans like Dwight Eisenhower who generally accepted the New Deal and were relatively liberal on race may have won the presidency in 1954 within this cauldron, but they lost the party in the long run, as we have seen.

Here are eight lessons this history taught me in my struggle to understand my country now.

Abby Scher is a former co-editor of Dollars & Sense and a current board member.

Have Dollars & Sense delivered to your door, six times a year, at the introductory price of only $19.95 for one year, $29.95 for two years (U.S. rate). Select your subscription term (one or two years) and destination (U.S., Canada, or other international) and click one of the links below. Your subscription will begin with the next published issue.

Would you prefer a digital subscription? If you want to save a tree and keep those print publications from piling up, specify (in the "Special instructions/comments" section of our online order system) that you would like an e-subscription. We will send you a full-color pdf of the latest issue and sign you up to get pdfs of the next year's (or two years') issues. (Note: International e-subscribers should use the U.S. rates.)

Help D&S by becoming a Sustainer. The Sustainer rate reflects the real cost of producing the magazine. By subscribing at this rate, you help ensure D&S's financial health and our ability to bring our unique and incisive economic analysis to more people. Donations to Dollars & Sense, a 501(c)(3) non-profit organization, are tax-deductible except for the value of your subscription.

“There are few things as important as the kind of work
Dollars & Sense is doing.”
—Noam Chomsky