Attorneys General can make a real difference, particularly if they are willing to consistently bring lawsuits against the presidential agenda both to protect their state and the country as a whole. 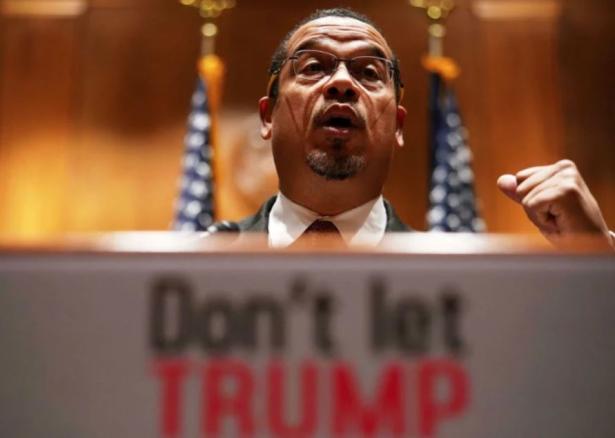 In all the excitement and dread of Election Day, it might have been overlooked that there were attorney general races in key states. Attorneys general can make a real difference, particularly if they are willing to consistently bring lawsuits against the presidential agenda both to protect their state and the country as a whole. The election of several progressives last week means that might soon be in the cards.

We’ve already seen the power of progressive attorneys general banding together. On Election Day, the attorneys general of 18 states sent a joint commenton proposed U.S. Department of Homeland Security regulations that would undermine the settlement agreement in Flores v. Reno. Flores requires the federal government to favor the release of immigrants who are minors, even if they arrive with their parents. After 20 days, the children must be released and placed in foster or shelter care. The administration has proposedundercutting the Flores settlement so drastically as to render it defunct.

Similarly, attorneys general in Maryland and Washington, D.C. are the plaintiffs in an emoluments lawsuit against President Donald Trump. A federal court recently ruled that lawsuit could proceed, which means the litigation discovery process might soon lay bare one facet of Trump’s corruption.

On the flip side, conservative attorneys general have long been good at leveraging their power to effectuate change via litigation. When Scott Pruitt was the attorney general of Oklahoma, he sued over EPA regulations 14 separate times. In September, Texas Attorney General Ken Paxton and 19 other Republican attorneys general filed the most recent lawsuit against the Affordable Care Act (ACA), arguing that when the tax bill undid the individual mandate, the entire ACA became unconstitutional.

In the Trump era, it’s more important than ever to have a strong cohort of progressive attorneys general that work to thwart the administration’s worst acts. By many metrics, then, the midterms were good for Democrats. Three states—Colorado, Michigan, and Nevada—had open seats previously held by Republicans that changed to Democratic control. And although the race hasn’t been officially called yet, it appears that Wisconsin may flip as well, with Democrat Josh Kaul ahead of incumbent Republican Brad Schimel by about 18,000 votes.

In Minnesota, the voters replaced a Democrat with a Democrat, with former U.S.  Rep. Keith Ellison replacing incumbent Lori Swanson, who chose to run for governor instead but didn’t make it past the primary. Minnesota’s race was still notable, however. First, Ellison had been the first Black person elected to the House of Representatives from Minnesota and the first Muslim person in the House. There was a very real concern as to whether his success in an urban and diverse congressional district could translate statewide, when much of Minnesota is rural and conservative. Next, Ellison’s challenger was Doug Wardlow, an attorney for the conservative Alliance Defending Freedom who made a name for himself as a deeply transphobic attorney, testifying against trans-inclusive bathroom policies and helming a lawsuitdefending a funeral home for firing an employee after she told him she would begin presenting as a woman at work.

Ellison’s win gives him control of an office with a long history of protecting the people of Minnesota. Current Minnesota Attorney General Swanson obtained a consent decree against a debt collection company that sued people for debts that were unverified or had already been paid. Her predecessor, Mike Hatch, filed lawsuits alleging an insurance company violated consumer protection laws, a major bank impermissibly sold consumer data, and a credit card company engaged in deceptive advertising about interest rates. Before Hatch, the Minnesota Attorney General’s Office was helmed by Hubert H. “Skip” Humphrey III. Humphrey oversaw a historic settlement with the tobacco industry, obtaining more than $6 billion for the state and making 35 million pages of industry documents public.

During his campaign, Ellison stated he’d work to protect the ACA and reproductive health freedoms. He also said that he would stand up to the Trump administration, noting that he’d continue in the tradition of Democratic state attorneys general who fought the Muslim travel ban.

Elsewhere in the Midwest, progressives scored a major victory in Michigan, where the GOP had held the office for the previous four terms. The current attorney general, Bill Schuette, couldn’t run again because of state-specific term limits. Schuette opted to run for governor instead, where he lost to the Democratic candidate, Gretchen Whitmer, by nearly 10 percentage points. Democrat Dana Nessel went on to beat Republican Tom Leonard for the open attorney general seat. The contrast between what Michigan will likely be like under Nessel versus Schuette couldn’t be starker.

Earlier this year, Schuette issued a formal attorney general opinion stating that Michigan’s civil rights law didn’t protect LGBTQ people from discrimination. That opinion stood in direct opposition to that of Michigan’s civil rights commission, which had decided just two months earlier that it would begin reviewing complaints based on sexual orientation or gender identity. This was almost certainly grandstanding for his governor run, but also had the real-world effect of throwing LGBTQ civil rights into complete disarray as Michigan residents were forced to determine whether Schuette’s opinion rendered the civil rights commission incapable of providing relief for individuals.

There’s also evidence that Schuette ignored the water crisis in Flint for far too long. He received the first complaints about water quality in January 2015 but failed to open an investigation until a year later. And, although he also touted his role in bringing charges against several government officials over Flint, he also said that as governor he’d continue the practice of having state agencies—funded with taxpayer money—pay the legal bills of the employees charged with criminal wrongdoing in the Flint water crisis.

Newly elected Michigan Attorney General Nessel began her career as a prosecutor, often working on child abuse cases. She then became a criminal defense attorney and a civil rights advocate. As the latter, she had several victories in landmark LGBTQ cases. She worked on Harmon v. Davis, a 2011 case that held that nonbiological parents in same-sex relationships could sue for custodial rights. She also played an instrumental role in DeBoer v. Snyder. That case challenged Michigan’s bans on both same-sex adoption and same-sex marriage. It was eventually consolidated with Obergefell v. Hodges and helped form the basis for nationwide legalization of same-sex marriage.

At the time Nessel began her run for attorney general, she was president of Fair Michigan, an organization that works to extend Michigan’s civil rights protections to people regardless of gender, sex, or sexual orientation. Fair Michigan also partnered with the Wayne County prosecutor’s office to investigate and prosecute anti-LGBTQ hate crimes. In the face of a federal administration that is pushing anti-LGBTQ policies, a state attorney general willing to take an aggressive stance against hate crimes could set the tone for prosecutors across Michigan. Additionally, just like Ellison, Nessel notched a statewide first: She’s the first LGBTQ person to be elected to a statewide office in Michigan.

Nessel has also indicated she’ll be a friend to labor unions. This is critical at a time when Michigan unions have been crushed under an anti-union state right-to-work law enacted in 2013. Since then, Michigan unions have suffered staggering membership declines, seeing as many as 137,000 people fall off the union rolls. Union political spending has also been decimated. Nessel’s commitment to the rights of workers to organize and to prosper can make a real difference in the state of Michigan.

Finally, in an open contest in Colorado (current Colorado Attorney General Cynthia Coffman chose to run for governor instead, but got only 6 percent of the vote in the GOP state assembly primary), Democrat Phil Weiser bested Republican George Brauchler by a full 4 percent. Weiser made Trump’s overreach and lawlessness a central point of his campaign, saying he got in the race specifically to provide a check on Trump.

Under Coffman, the Colorado Attorney General’s Office had already joined multi-state litigation against opioid manufacturers and tobacco companies. However, where Coffman declined—and Brauchler agreed with that refusal—to join any lawsuits defending Deferred Action for Childhood Arrivals, Weiser stated he would participate in those.

Weiser also ran on a platform of prison and bond reform. He wants to implement diversion programs for individuals living with mental illness or drug addiction. He also said he would reform the cash bond process to ensure people don’t languish in jail because of an inability to pay the bond.

Regrettably, Weiser is slightly less enthusiastic about using his post to combat climate change. He indicated he was uncomfortable with suing oil companies over their role in climate change but asserted it would make legal sense to sue coal companies instead. However, he did say that he would join the existing litigation seeking to stop the administration’s rollback of the Clean Power Plan.

All told, Democrats now occupy a majority of the 43 states where the electorate chooses the attorney general. When they act in concert, they have an opportunity to effect real change. Even as the threat of a conservative United States Supreme Court looms, strategic litigation in lower courts can positively alter things at the state or circuit level. Large-scale multi-state litigation also has the ancillary effect of taking a very long time to proceed. This means things like lower court injunctions of Trump administration actions could stand for some time until the matter reaches the Supreme Court.

In the meantime, at the state level, Ellison, Nessel, and Weiser have demonstrated a real commitment to ensuring that all citizens in their state feel listened to, respected, and protected.

[Lisa Needham is an attorney who has worked in the areas of First Amendment, education, and labor law. She is also an adjunct law professor focusing on teaching legal writing to non-traditional students. She is the deputy editor of Lawyerist, where she writes about access to justice and diversity in the law, and she is also the editor-in-chief of Bitter Empire. Follow her on Twitter: @snipy]

Rewire.News is a nonprofit daily online publication. We seek to foster public knowledge and enlightenment through high-quality evidence-based news, analysis, commentary, and investigative reporting on issues of sexual and reproductive health, rights, and justice. Our staff is comprised of professional editors and journalists, as well as multimedia, social media, communications, development, technology and business managers.

We believe journalism has an inherent role in promoting a healthy and just society. We therefore take seriously our responsibility to seek truth and report it; minimize harm to people and communities through accurate reporting; act independently; offer vigorous commentary, debate, and opinion based on fact and considered thinking; and be accountable and transparent to our readers.

We're a small non-profit, but we serve millions of readers. Support quality journalism to hold Trump accountable. Chip in whatever you can afford to Rewire.News today.