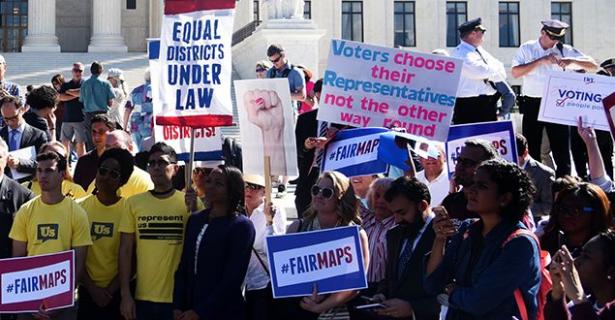 As the partisans clear the rubble, the results of the 2018 midterm elections should deeply disturb all Americans who care about representative democracy no matter their politics.

That’s because despite the Democrats’ approximately seven-point win of the percentage of votes cast, Democrats look likely to win only 37 seats. This is a mockery of the notion held by John Adams and the founding fathers that Congress should be an “exact portrait, a miniature” of the people as a whole.

Contrast that to the Tea Party wave of 2010, when a seven-point win by Republicans gave them 63 seats. Democrats may have the satisfaction of a majority, but it is by modern standards a razor-thin one. It’s also a majority that may be hard to hold in 2020 if the highly unusual wave dynamics of 2018 don’t repeat themselves.

This unrepresentative outcome has to do in large part with aggressive gerrymandering in a handful of key states like North Carolina, Ohio and Michigan. In North Carolina, Democrats won half the congressional vote but less than a quarter of seats. In fact, not a single congressional seat in North Carolina changed parties in 2016 and 2018. The results are equally stark for Ohio, where the two major parties regularly split the vote nearly 50-50, but Republicans have maintained a lopsided 12 to 4 advantage in the Ohio congressional delegation since 2012.

Never have maps been more gerrymandered. But also never have there been so many massive wave elections to test the strength of gerrymanders. So far in the four elections of the decade, gerrymanders are undefeated, producing with rare exception, exactly the results they were designed to do.

The slim majority that Democrats won this year, in fact, rests not so much on overcoming gerrymandering than on racking up wins in districts in states like New York, California, and Minnesota, where maps were drawn after the 2010 census by commissions, split-control governments, or courts. Of the 37 seats that Democrats have picked up (or look likely to pick up when the counting is done), just 19 percent were drawn by GOP-controlled legislatures. By comparison, 30 percent were drawn by commissions, and 43 percent were drawn by courts. (The latter includes four districts that Democrats picked up in Pennsylvania because this spring a court replaced the state’s aggressively gerrymandered map — which gave Republicans 13 of 18 congressional districts — with a more neutrally drawn map.) In contrast to politically calculated maps that strategically slice and dice voters with the goal of locking in the advantage of one party over the other, maps drawn through these less politically charged processes give far more weight to things like keeping communities and political subdivisions together. And they also are far more responsive to shifts in voter sentiment. As Democrats win more votes, they win more seats. The same is also true in reverse: As Republicans win more votes, they win more seats.

That is how our democracy was meant to function. We shouldn’t have to depend on tsunami-level wave elections to bring about political change.

The good news is that Americans of all political persuasions increasingly seem to understand this. These midterm elections, voters also handed victories to measures in four states — Colorado, Michigan, Missouri, and Utah — that will create a more transparent and independent process for drawing the next set of maps. In Colorado, the reform measures won more than 70 percent of the vote. Measures in Michigan and Missouri weren’t far behind, outperforming both Democratic and Republican candidates (and in Michigan, outpacing a marijuana referendum). Robust citizen-led reform efforts also are underway in states like Virginia, Arkansas, and Oklahoma.

Less certain is whether courts understand how much gerrymandering is undermining American democracy. For three decades, the Supreme Court has tried and failed to create a workable formulation for policing gerrymandering. Most recently, this past June, it punted and sent partisan gerrymandering cases from Wisconsin and Maryland back to lower courts on technical grounds. The Justices will have another chance this spring when they are expected to hear a challenge to North Carolina’s badly gerrymandered congressional map, and several other partisan gerrymandering cases are not far behind. State courts might also be inclined to follow the example of the Pennsylvania Supreme Court and get involved by providing a critical check and balance when maps go too far.

But time is running short. The next round of map-drawing takes place in early 2021. If fairer processes aren’t in place by then, and if courts continue to be unwilling to do their job in safeguarding American democracy, there is every indication that the next round of gerrymandering will be even more pernicious than those of this decade. Indeed, increasingly robust map-drawing technology and voter-specific big data technology will make it possible to draw maps with a degree of micro-precision that was undreamed of when this decade’s maps were drawn in 2011.

There is a lot that can be done to ensure that representation in the House is fairer and closer to the Framers’ vision of a body that looks like America. But time is running out. If we are to save our democracy, we have to act now.

Michael Li serves as Senior Counsel for the Brennan Center’s Democracy Program, where his work focuses on redistricting, voting rights, and elections. Prior to joining the Brennan Center, Mr. Li practiced law at Baker Botts L.L.P. in Dallas for ten years and is the author of a widely cited blog on redistricting and election law issues that The New York Times called “indispensable.” He is a regular writer and commentator on election law issues, appearing on PBS Newshour, MSNBC, and NPR, and in print in The New York Times, Los Angeles Times, USA Today, Roll Call, Vox, National Journal, Texas Tribune, Dallas Morning News, and San Antonio Express-News, among others.

In addition to his election law work, Mr. Li previously served as executive director of Be One Texas, a donor alliance that oversaw strategic and targeted investments in non-profit organizations working to increase voter participation and engagement in historically disadvantaged African-American and Hispanic communities in Texas.

Mr. Li received his J.D., with honors, from Tulane Law School and his undergraduate degree in history from the University of Texas at Austin.