Outside of traditional labor structures, a new labor activism is surging, often supported by traditional unions. This new activism ranges from the “Fight for $15” movement to the statewide teacher strikes that broke out last spring. 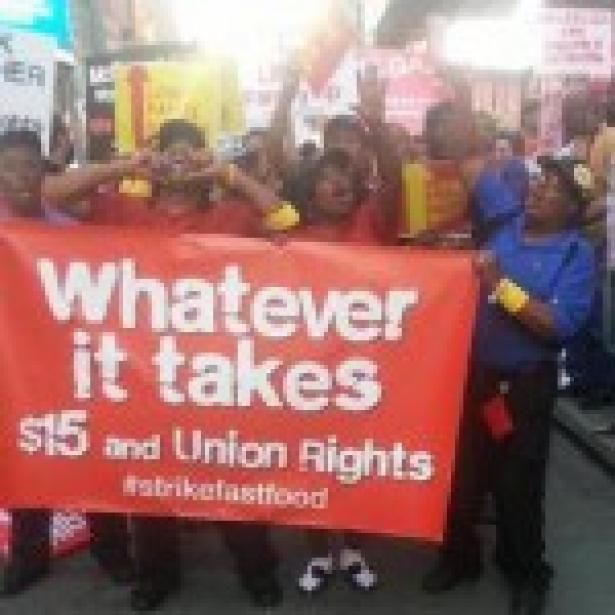 Mohsen Abdelmoumen: How do you explain that in front of the unprecedented ultraliberal offensive, we see weakened worker movement and trade unions?

But these numbers don’t tell the full story. Outside of traditional labor structures, a new labor activism is surging, often supported by traditional unions. This new activism ranges from the “Fight for $15” movement’s struggle for a new labor wage minimum to the statewide teacher strikes that broke out in the United States last spring.

Worker centers — community-based organizations that provide support for low-wage workers — are also emerging in one U.S. city after another. These represent a new vision for labor activism.

What the traditional and nontraditional approaches to labor activism share: a conviction that social justice in the United States requires a sweeping mobilization of working people.

Is there a crisis in the labor movement in the United States?

The American labor movement has been in crisis mode since the 1970s. The norms that defined labor relations in the mid-20th century have almost all broken down. Large employers no longer accept, as they once did, collective bargaining between workers and management as a reasonable path to labor “peace.” Federal labor law no longer functions to protect workers’ right to organize.

The result has been a steep decline in the number of workers covered by union contracts and a steady erosion of labor’s political power. That erosion has opened the door to a staggering increase in economic inequality in the United States.

Your 2004 book, “Greed and Good: Understanding and Overcoming the Inequality That Limits Our Lives”, was awarded an “outstanding title of the year” ranking by American Library Association reviewers. In your opinion, where does the exacerbation of inequalities come from? Is the concentration of wealth in the hands of a minority not undemocratic? Can we say that we live in a democracy when only less than 1 percent holds the wealth while the rest of the world’s population gets bogged down more and more in poverty?

We owe America’s greater economic equality of the mid-20th century to two institutions: the labor movement and the progressive income tax. In the 1950s, income over $200,000 faced a 91 percent tax rate. The highest tax rate in the contemporary United States? Just 37 percent.

The collapse of the institutional structures that used to undergird greater equality has concentrated wealth in the United States at a ferocious rate. And that has been bad news for our democracy.

Let me give one example of the outsized political influence of the rich. The latest Center for Responsive Politics data show that just 0.5 percent of donors to political campaigns contribute $200 or more. But this tiny group of affluents are generating 66 percent of campaign funding.

Do we not live under a plutocracy rather than in democracies?

Some of America’s top political scientists certainly seem to think so. Northwestern University’s Benjamin Page, one of the political scientists who’s done a deep dive into the research data, has concluded that average American citizens have “no detectable influence at all” on federal policy.

In your book “The Rich Don’t Always Win: The Forgotten Triumph Over Plutocracy That Created the American Middle Class, 1900-1970”, you relate how Americans a century ago went about ending America’s first Gilded Age on inequality. Does the vanguard of the fight against plutocracy not pass by a strong and organized middle class?

That initial struggle against plutocracy a century ago turned out to be a cross-class offensive that united working people, middle-class professionals, and even some individuals with grand fortunes. We had a real understanding back then that social decency demands both an effort to level up our poorest and an effort to level down our richest. And to a remarkable degree, the United States did just that in the middle of the 20th century. The United States became the first nation with a mass middle class.

That growing equality, of course, didn’t just miraculously happen. People struggled for it. In 1946, for instance, one of every ten American workers went out on strike.

You co-edited “The New Labor Press: Journalism for a Changing Union Movement”back in the early 1990s. Knowing that the ruling classes and the big bosses control the daily headlines and the big media, is there not a need for a committed press that defends the working class?

We definitely do need an independent media not beholden to the upper echelons of our economic order. The labor press once played that role, but then its reach declined as traditional unions declined. But now today we have new online opportunities for challenging corporate media.

We notice that there are more and more precarious jobs and non-unionized workers, often without social security coverage, and in some countries there is a return of exploitation of workers close to slavery. How do you explain this decay of social achievements?

The more that income and wealth concentrate at the top, the more the social safety net frays, the fewer social protections. I would even call this dynamic an iron law of inequality. Let me try to explain why.

In more equal societies, few of us will have enough personal wealth to be totally financially secure no matter what happens to us. We worry about what could happen to us and our loved ones should we be forced to face a long bout of unemployment. Or a crippling ailment.

In more unequal societies, the story is different. Significant numbers of people in unequal societies — those people fortunate enough to be wealthy — don’t have to worry about their basic security. These affluent have enough personal resources to weather any illness or accident. These wealthy require no public safety net. They feel themselves totally self-sufficient — and wonder why everyone else can’t be self-sufficient, too.

Faced with the current challenges and the lack of working class framing, do not you think that we need to reinvent a combative trade union movement? Should the trade union movement not readjust to this new sociological datum, namely precarious jobs, temporary work, subcontracting, new jobs, etc.?

That reinvention, I believe, has already begun, inside and outside the traditional trade union movement. I think more and more labor activists understand that the old model for union organizing in the United States, based on collective bargaining with individual companies, can no longer be the automatic default approach to building worker power.

With the regression we are experiencing at the moment, is it not necessary to reread Karl Marx?

Back in the middle of the 20th century, in the midst of growing economic equality, most analysts in the United States derided the notion that Marx had anything significant to offer. Marx had predicted, these analysts claimed, that the rich would get ever richer under capitalism and the poor ever poorer. But that clearly wasn’t happening in the United States, the argument went, so why pay any attention to Marx?

I think that more people see now that Marx was tracing the trend line of capitalist society. Left unchecked and to their own devices, he believed, capitalist societies would become ever more unequal. But in the middle of the 21st century we didn’t leave the capitalist market economy to its own devices.  We had various checks in place — a strong labor movement, a progressive tax system most prominently among them. But we couldn’t sustain these checks. We need to be discussing why, and that’s what I try to do in my new book, The Case for a Maximum Wage.

Do not you think that the working class around the world must imperatively unite against the reign of big capital?

The key question becomes how to do this uniting, and I see some encouraging new developments. More and more social justice activists in the United States and around the world are understanding that we can’t just sit back and let our economies generate inequality and then try to fix that inequality with various redistributive strategies. We need to prevent inequality from taking root in the first place.

That means, above all, focusing our attention on the prime engine driving inequality in the world today, the modern corporation. Nearly two-thirds of the richest 0.1 percent in the United States owe their fortunes to their corporate and banking executive status. Last year, 21 American corporate CEOs took home more than 1,000 times what typical workers in their industries were earning.

Outrageous rewards like these give corporate executives an incentive to behave outrageously, to do whatever it takes to hit the corporate jackpot. And they do just that. They downsize and outsource, replace full-time workers with part-timers who get no benefits, and take all sorts of other steps that leave working people economically precarious.

How can we challenge this dynamic? One emerging new idea: We can leverage the power of the public purse against enterprises that make us more unequal. We could deny government contracts, subsidies, and tax breaks to companies that pay their top executives over 25 and 50 times what their workers are making.

In the United States, labor unions have led the successful fight to require that corporations annually disclose the ratio between their CEO and typical worker pay. Those disclosures started this year. That same disclosure is coming to the UK, and the Labour Party is now pushing policies that would use these ratios to penalize corporations that pay their execs unconscionably more than their workers.

We’re seeing, in a sense, the dawning of a new age of “pay-ratio politics,” and I think this new thrust has considerable egalitarian promise.

You write about inequalities for the Institute for Policy Studies in Washington, D.C. Can you tell us about your work at the Institute?

My colleagues and I at the Institute are researching and promoting new approaches to narrowing the vast gaps between the rich and everyone else. We work closely with social justice groups and progressive lawmakers, and we publish a wide variety of material on just how unequal our world has become and what we can do to make our societies significantly more equal.

We publish a weekly newsletter that goes into the email inboxes of activists, researchers, journalists, lawmakers, and educators all around the world. And we supplement this newsletter with a website that spotlights news and views — and lots of data — about inequality. To learn more and sign up for our newsletter, just make your way online to Inequality.org.

Who is Sam Pizzigati?

Sam Pizzigati, an associate fellow at the Institute for Policy Studies in Washington, D.C., currently co-edits Inequality.org, the online world’s prime portal for issues around maldistributed income and wealth. Sam Pizzigati has written extensively on our economic divides, with articles and op-eds appearing worldwide in outlets ranging from the New York Times and the Guardian to Le Monde Diplomatique.

Sam Pizzigati has authored four books on income and wealth inequality and co-edited another. His most recent book, The Case for a Maximum Wage (Polity), appeared this past June and offers a politically plausible path toward a cap on excessive incomes. His 2012 title, The Rich Don't Always Win: The Forgotten Triumph over Plutocracy that Created the American Middle Class, 1900-1970 (Seven Stories Press), traces the dismantling of America’s original Gilded Age.

[Mohsen Abdelmoumen is an independent Algerian journalist. He wrote in several Algerian newspapers such as Alger Républicain and in different sites of the alternative press.]