The Supreme Court’s ruling was expected to diminish union membership. But so far, many unions have actually increased their numbers since the verdict. Conservative groups are working to reverse that trend in the long run. 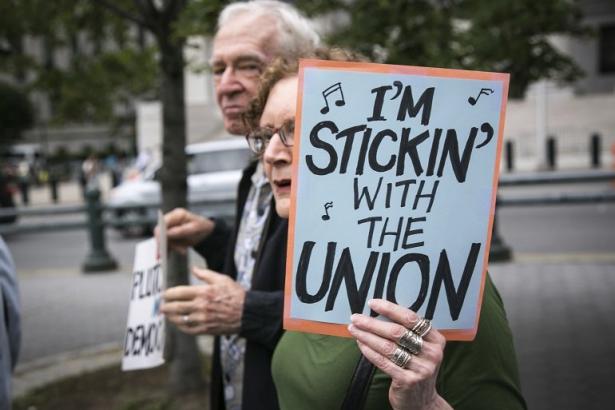 Five months ago, the U.S. Supreme Court dealt what was seen as a massive blow to unions in Janus v. AFSCME.The justices banned the collection of union fees from public workers who receive union-negotiated benefits but choose not to belong to the union.

The ruling had an immediate negative effect on union finances. In Pennsylvania, for instance, refunding fees to nonmembers resulted in a roughly 15 percent loss of the $42.5 million that unions collected from executive branch members and nonmembers in 2017, according to the state’s Office of Administration.

The court’s decision also led many to predict that massive defections of union members would follow. But so far, even as anti-union organizations wage campaigns to convince members to drop out, most are staying put. Some unions have actually increased their numbers since the Janus verdict.

“I think the right wing thought this would decimate public-sector unions, and they were clearly wrong,” says Kim Cook of the Cornell University Worker Institute, which provides research and education in support of unions and workers’ rights.

According to Lee Saunders, president of the American Federation of State, County and Municipal Employees, “After the Janus case, public-service workers are choosing to join AFSCME at a much higher rate than those who drop.”

But Ken Girardin, analyst for the fiscally conservative Empire Center for Public Policy in New York, says that many employees are still uninformed about their right to leave unions and that it will take a few years to see significant declines in membership.

“Based on what we’ve observed, you will likely see a multi-year drop in membership, driven chiefly by the fact that people aren’t going to join in the first place," says Girardin. "The next cohorts of employees won’t join at the same rate as the retirees they are replacing.”

In the meantime, state unions are seeing similar trends to AFSCME.

In Pennsylvania, 50,072 state executive branch employees were members of unions at the time of the Janus decision. That number has increased to 51,127, according to the state’s Office of Administration. In Oregon, the Local 503 chapter of the Service Employees International Union (SEIU) reported in September that new union members have outnumbered dropouts by three to two. In California, data from the Controller’s Office show a small increase in state employee union membership, which totaled 131,410 in October -- up a small fraction from 131,192 in June.

“The decision didn’t have the major impact on membership that was anticipated,” says Science Meles, executive vice president of a Chicago chapter of SEIU, which had about 23,800 members in August 2017 and now has about 26,000.

While the National Education Association, which represents roughly 3 million employees of schools and colleges, says it immediately lost dues from 87,000 people who were nonmembers being charged, it has not seen a significant drop in membership. According to Staci Maiers, the group’s senior press officer, “Our affiliates have signed up more new members as of October 1 than they have previously by this point in time.”

Fearing a loss at the Supreme Court, unions have been running aggressive membership drives since before the Janus ruling. Their membership may also be sustaining or thriving because people aren't aware of the Janus decision or because of actions taken by states to protect unions. As we previously reported, some Democratically controlled states have recently made it harder for public employees to leave unions.

New Jersey limited the time frame when government workers can withdraw from their union. New York banned state agencies from releasing employees’ personal data that could be used by union-busting groups to persuade members to pull out. California, New Jersey and Washington now prohibit public employers from discouraging union membership and guarantee unions full access to hiring orientation sessions so they can explain the advantages of membership. In New Jersey, employers that break this law will be forced to reimburse unions for any lost dues.

Due to procedural hurdles and union tactics, the “number of folks who have successfully resigned post-Janus is much smaller than the number that have attempted to resign,” says Maxford Nelsen, director of labor policy for the Freedom Foundation, which has waged an aggressive campaign in the Northwest to urge public-sector employees to give up their union membership.

Meanwhile, labor experts believe that counter-legislation will emerge that seeks to lessen union power. When conservative lawmakers convened at the American Legislative Exchange Council conference last month, Mark Janus himself, the plaintiff in the Supreme Court case, urged them to champion the model bills ALEC is pushing that would further hurt unions.

In Pennsylvania, a Senate committee held a hearing at the end of October to consider a comprehensive bill that would change the commonwealth’s practices to make it easier to leave unions.

“If the rules aren’t settled now by legislation, they will be determined by aggressive tactics by unions to keep their members,” said Terrence J. Pell, president of the Center for Individual Rights, at the Senate hearing.

Groups that cheered the Janus ruling are also continuing to take laws that protect unions to court. The Fairness Center, self-described as “a public interest law firm that provides free legal services to those hurt by public-sector union officials,” is suing AFSCME over a Pennsylvania law that lets unions impose a limited time frame in which members can drop out.

But some say the ultimate survival of public-sector unions will depend not on preventing dropouts but on their ability to convince new employees that union membership is important.

“As new employees are hired, unions have to make a pretty strong case that people should join,” says Cook of the Worker Institute. “We’re feeling good about the lack of impact so far on union membership because of the Janus decision. But that’s no guarantee for the long run.”

This appears in the Management & Labor newsletter.