Based on the KJV, it omits all entries that express themes of freedom. 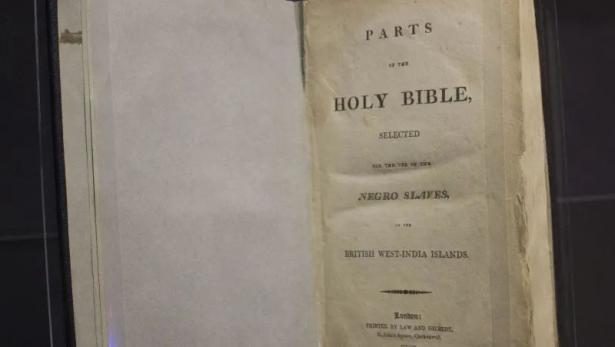 , Museum of the Bible

A new exhibit at a Washington, D.C., museum featuring an abridged version of the Bible sheds light on how Christian missionaries converted enslaved Africans to Christianity by teaching them the Gospel... except the parts about freedom, equality and resistance.

According to NPR, Parts of the Holy Bible, Selected For the Use of the Negro Slaves, in the British West-India Islands, is on display at the Museum of the Bible in Washington, D.C., and is one of only three known copies of this abridged version of the King James Bible. Printed by the Missionary Society For the Conversion of Negro Slaves, the text of the Bible was used by missionaries from England to convert slaves to Christianity.

Artifact of the Day: Parts of the Holy Bible, Selected for the Use of the Negro Slaves (AKA "Slave Bible") 1808. Though called "Holy," it is deeply manipulative. Based on the KJV, it omits all entries that express themes of freedom. #BlackHistoryMonth pic.twitter.com/UxrkwgT0PP

The book is basically the enslavers extended remix of the King James version of the Bible, leaving out all that unnecessary junk that might lead slaves to turn on their masters. For instance, Moses doesn’t even exist until he is an old man in the “Slave Bible.”

“You’ll see a jump from Genesis 45, and they’ve cut out all the material to Exodus 19,” says Anthony Schmidt, associate curator of Bible and Religion in America at the museum. “What they’ve cut out is the story of the Israelites captivity in Egypt and their eventual liberation and journey to the promised land.”

The censored version removed 90 percent of the Old Testament and 50 percent of the New Testament, eliminating potentially seditious passages such as Exodus 21:16, which reads: “And he that stealeth a man, and selleth him, or if he be found in his hand, he shall surely be put to death.”

However, the curators of the Slavery Bible did keep some passages that they thought were necessary for slaves, including Ephesians 6:5:

Servants, be obedient to them that are your masters according to the flesh, with fear and trembling, in singleness of your heart, as unto Christ;

The Missionary Society For the Conversion of Negro Slaves was a group of missionaries’ that was formed in 1794. The society’s original intent was to convert Native Americans to Christ but the group began to focus on enslaved Africans after the American Revolution.

The extremely rare artifact is on loan from Fisk University in Nashville, Tenn., which has housed the “Slave Bible” in their special collection for more than 50 years. The only other known copies of the artifact are in the United Kingdom.

Michael Harriot is a writer and podcaster.  He contributes in the field of journalism, commentary and is one of the most sought-after spoken word poets in the country.

Michael is also a critically acclaimed poet, journalist novelist and broadcaster. He is the editor-in-chief of NegusWhoRead, and in 2013 he began hosting "The Black One" podcast and it has grown to become one of the most-listened to podcasts in Black America.

His social commentary has taken him to Ferguson, Baltimore and anywhere readers and listeners around the world want behind-the-scenes unfiltered information.