Climate Crisis: “There Is No Time to Continue Down This Road Of Madness”

We are in the midst of record-setting climate extremes, why wasn’t news coverage of the 2018 UN climate conference front-page news? Why didn’t news coverage, where it existed, convey the crisis of time – 11 years according to UN studies. 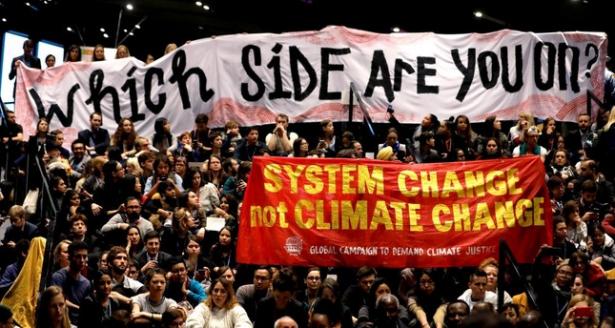 A week into the 2018 UN climate change conference convened in Poland, The New York Times’ quote of the day reads: “The biggest threats to the planet are the lack of U.S. climate leadership at home and the unwillingness of the U.S. to engage with China.”  The biggest threats to the planet!  Yet not until page 10 of that paper – after a good 3-4 pages of glitzy, consumerist ads and an article on a Spanish city trying to get rid of its pigeons – do we find a smallish piece of news on the climate conference.  Two days earlier, USA Today carried a brief news article touching on the fate of the planet, “Carbon dioxide emissions soar to record level,” placed on page 6.

At the climate conference’s wearied end on December 15, major newspapers carried somewhat flat, technocratic pieces, with relief expressed that that the US pulling out of the UN climate agreement by 2020 did not stop low bar progress and agreement.  Bangadeshi climate scientist, Saleemul Huq summed up more realistically the reality: The conference goals are “nowhere near ambitious enough to tackle” the climate emergency “at the scale we need to.”

Given that we are in the midst of record-setting climate extremes, why wasn’t news coverage of the 2018 UN climate conference front-page news in every newspaper in the country?  As was news during the Second World War.  And why didn’t news coverage, where it existed, convey the crisis of time – 11 years according to UN studies – we have to forestall global devastation at our current rate of climate change emissions.

Consider these findings from the most important document to come out during the Trump administration - the recent National Climate Assessment Report, Volume 2 produced by 13 federal agencies and some 3000 climate experts inside and outside of government. (The administration tried to bury the report by releasing it on the day after Thanksgiving, when half the country was frenzied by Black Friday shopping deals.)

·       Temperatures continue to rise: the 20 hottest years in recorded history have occurred in the last 22 years.   They will continue without aggressive action to reduce and eliminate coal, gas and oil.

·       The chance of extreme events – out-of-control wildfires, more severe hurricanes, longer droughts, intensifying rainfall, sea level rise, and salt water intrusion into drinking water – is increasing for each of these.

·        Coastal communities, where 40 percent (or 126 million) of US people live, have multiple threats from sea level rise, flood damage and hurricanes, as we have seen in record-breaking intensity and destruction of Hurricanes Katrina, Sandy, Harvey, Maria, Michael, and Florence.

·       Without major reductions in greenhouse gas emissions from fossil fuels, temperatures could increase by 9 degrees Fahrenheit or more by end of century – guaranteeing an unlivable planet.

The US National Climate Assessment is the first national study to project a cost on all of the damages to human health, property, roads, rail and electricity, air and water quality due to global warming. While the Trump administration has walked away from facing facts about climate change and touts making our economy great again, expert economists forecast a decline of 10% in the economy by the end of this century, with business as usual.

As for global economy losses, many of the largest pension funds managers, insurers and financial assets managers warned the 190 countries convened at the UN climate conference that we face permanent economic catastrophe across the world unless we quickly phase out fossil fuels and replace them with efficiency and renewable energy.

In our country, will coastal cities be prepared to relocate millions of people and a trillion dollars of infrastructure with sea level rise? Will people in the Southeast be prepared for more wildfire and more extreme hurricanes, as forecast? Will Midwest farmers survive crop failures from longer droughts and declining irrigation water as predicted? Will the Southwest be prepared for more severe heat waves, increasing forest fires, water scarcity, and growing desert?  As for the West, the hellish wildfires in California forecast the future. Will New England be ready for the end of distinctive seasons and predicted flooding from extreme rainfall?

Magnify all of these natural disasters by many fold for poorer countries in Africa and Asia and Pacific islands – none of which has nearly contributed to climate change as has the U.S. and other industrial countries.

Since 2016, our government has launched efforts to overturn reductions in tailpipe emissions, lowered regulations on polluting coal power plants, opened up public land for fossil fuel exploration, and vowed to exit the from UN Climate Agreement in 2020 – the only country to do so.  In Trump’s benighted words, “his natural science instinct” tells him there is no climate change.

Humankind’s future depends on how swiftly the US and other countries replace fossil fuels with efficiency measures and renewable energy sources, reduce excessive consumption and prepare for climate disruption.

Greta Thunberg, the 15-year-old Swedish climate activist speaking at the UN climate conference on behalf of the global youth climate movement, nailed the problem for their future. Every day the world uses some 100 million barrels of oil, yet ”there are no politics to change that…no politics to keep the oil in the ground,” she said.  “So we can no longer save the world by playing by the rules, because the rules have to be changed…Since our leaders are behaving like children, we will have to take the responsibility they should have taken long ago…There is no time to continue down this road of madness…We have come to let them know that change is coming whether they like it or not. The people will rise to the challenge.”

[Pat Hynes is a retired Professor of Environmental Health from Boston University and environmental engineer. She directs the Traprock Center for Peace and Justice in western Massachusetts.]