For a Dead Movement, Labor’s Been Showing a Lot of Life

The right promised its anti-union campaigns would yield Republican victories in 2018. But unions have been bouncing back, as the GOP’s defeats make clear. 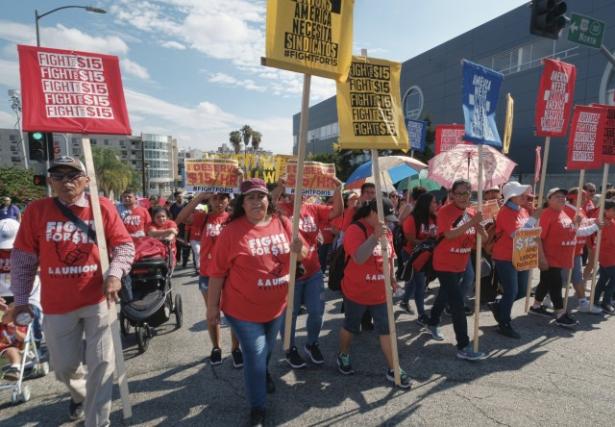 Google the phrase “unions are dying” and you’ll see a host of news stories reporting this demise over the past year—celebrated on the Right, lamented on the Left. But, to paraphrase Mark Twain, reports of this death have been greatly exaggerated.

Union membership has been in decline in the United States for the past 40 years as a result of de-industrialization, globalization, automation, fierce employer opposition, and labor laws that make it extremely difficult for workers to organize—as well as some self-inflicted wounds. Today, just 10.7 percent of American workers belong to a union.

Since their inception, unions have constantly been under attack from right-wing elected officials and the corporations that support them. With sweeping Republican victories at the state level during the Obama years, anti-union forces upped their efforts to end unionism in the U.S. They pushed so-called right-to-work legislation and other anti-union initiatives in multiple states. Those efforts only intensified after they won control of every branch of the federal government in 2016.

At the 2014 Conservative Political Action Conference (CPAC), longtime anti-tax gadfly Grover Norquist and then-RNC Chair Reince Priebus led a session of thousands of conservative activists called, “On Wisconsin! Turning Blue States Red.” They were practically popping the champagne as they celebrated Wisconsin Governor Scott Walker’s attack on public-sector collective-bargaining rights and lauded it as the model for ensuring Republican control of government.

The Right also began pouring hundreds of millions of dollars into a vast web of tax-exempt organizations, collectively known as the State Policy Network (SPN), to carry out its bidding at the state level. Almost Immediately, some of SPN’s state-based affiliates—like the Freedom Foundation in Oregon, Washington, and California—announced major efforts to defund those states’ unions. Tom McCabe, president of the Freedom Foundation, went so far as to say that the organization’s main purpose (in violation of the group’s non-profit tax status) is to weaken unions so that Republicans could win elections. Similarly, the Commonwealth Foundation in Pennsylvania sent out a fundraising document calling for “war on labor unions.”

For some, the 2016 election signaled the end of union power, which they believed had been so weakened in states like Michigan, Pennsylvania, and Wisconsin that it made Trump’s victory in those battleground states possible. The conviction that unions were history was further intensified by the Supreme Court’s Janus decision, which limited public-sector unions’ ability to collect fees from non-union members.

But here’s where the storyline changes. Throughout American history, when unions have been under attack and supposedly down for the count, they have bounced back. This time appears to be no different.

Consider: Fully 62 percent of Americans support unions, according to the Gallup poll. That number has increased 14 points over the past 10 years. And, among young adults (18-29-year olds), 68 percent hold a favorable view of unions compared to 46 percent who feel the same about corporations. As corporate power has increased and union membership has decreased, millions of workers have come to understand that the only way to get ahead is through collective action.

Consider: Despite a system rigged against them, unions have been winning organizing victories among white-collar workers, including adjunct professors, journalists at the Los Angeles Times, Chicago Tribune, and New Yorker, and workers at media firms like the HuffPost, Slate, Salon, Thrillist, and MTV News. Graduate teaching assistants, nurses, and bus drivers, as well as service-sector workers in the Silicon Valley, have all been successfully organizing unions.

Consider: Broader movements aimed at winning workers’ rights have been gaining momentum. The Fight for $15, started by SEIU, has waged campaigns in 300 cities and garnered support across America. Thus far, it has won $62 billion in raises for 22 million low-wage workers. The Red for Ed movement, made up of teachers, support staff, and students in public schools, swept across a half-dozen, mostly red states and continues to grow; the movement has won pay raises and increased funding for public education.

Consider: New forms of worker organization are also taking root. Networks of “gig economy” workers at companies like Uber and Lyft are aligning with unions to lobby for worker protections and pay raises. New organizations are forming in cities to win justice for low-wage restaurant and hotel employees.  To protest sexual harassment and lack of inclusion at Google, more than twenty thousand of the company’s employees and contractors walked off the job.  Somali workers in Minnesota recently organized to win changes in their work rules at America’s second-largest company, Amazon.

Why have these groups been so successful? Because the need for workers to organize today is as great as it’s ever been.

And because of this—and despite a wholesale assault from the right—union-membership numbers have held their own in recent years. According to the Bureau of Labor Statistics, between 2014 and 2017, union membership as a percent of the workforce has increased in 17 states, remained the same in 16, and decreased by just 1 percent in another 12.

The 2018 election also reinforced the critical role unions play in electing progressive, pro-worker candidates. Member mobilizations, organizers, volunteers, and contributions continue to make unions among the most significant forces in Democratic politics. Their investments in building structures to mobilize voters of color are among the most successful in the nation.

In Michigan and Pennsylvania, union-household voters made up 25 percent of the electorate in 2018 and swept Democrats to victory up and down the ballot. So much for the Mackinac Center (Michigan) and Commonwealth Foundation’s (Pennsylvania) plans to deliver the knockout blows to unions!

In Wisconsin, Governor Scott Walker, the architect of the plan to destroy unions, won voters in non-union households by a wide 53 percent to 46 percent margin. But among union households, Walker lost by a full 14 points, which is what pushed Democrat Tony Evers over the top to victory.

Unions in Washington, Oregon, and California were as politically active as ever in 2018. Despite the anti-union Freedom Foundation plowing tens of millions of dollars into a three-year anti-union effort, only a small number of local unions in Oregon and Washington have experienced a slight uptick in the number of members opting out of the union, but these numbers are so low that the locals are holding steady and won’t see a change in services or activity. Other local unions in those states  have actually increased their membership numbers. Following the midterms, all three states have become more solidly Democratic. Each now has a pro-worker, Democratic governor. Democrats also now hold nearly every statewide office and enjoy increased majorities in all three state legislatures, gaining super-majority status in the Oregon Senate as well as the California Senate and Assembly.

If I were a Freedom Foundation donor, I’d ask for a refund.

America’s labor unions are not out of the woods, but they have turned the corner. Smart unions have created new techniques for communicating with their members; they are strengthening their workplace organizations, developing growth strategies, organizing in communities of color, and supporting new forms of worker organization.

That’s why reports of the labor movement’s death have been greatly exaggerated.

[Steve Rosenthal is the former political director of the AFL-CIO, and has been a labor and progressive strategist for nearly 40 years.]