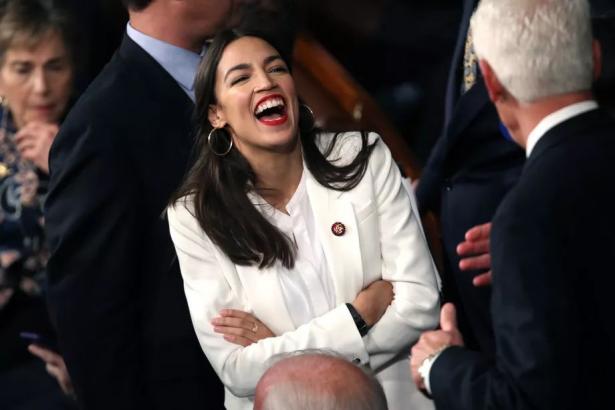 In an interview scheduled to air Sunday on 60 Minutes, America’s most widely covered new House member Alexandria Ocasio-Cortez (D-NY) floats the idea of a top marginal income tax rate as high as 70 percent as part of a plan to finance a “Green New Deal” that would aim to drastically curb America’s carbon dioxide emissions.

This is not a formal policy proposal. Indeed, the whole idea of offsetting the budgetary cost of decarbonization with taxes is somewhat at odds with the main currents of thought in the Green New Deal universe, which lean more toward the idea that deficits don’t matter and the costs shouldn’t be paid for at all.

Seventy percent is a lot higher than the current rate and will doubtless fuel the conservative effort to paint AOC as a know-nothing, but the number is in line with one prominent strain of recent economics research and is at least moderately well supported by America’s historical experience.

Top tax rates used to be much higher

Historically, the United States used to have many more tax brackets, and the top marginal tax rates were extremely high. Under Eisenhower, the top earners paid a 91 percent marginal rate, falling to Ocasio-Cortez’s proposed 70 percent under Kennedy and Johnson, before falling to 50 percent after Ronald Reagan’s first big tax cut, and then down to 38 percent after the 1986 tax reform.

One big part of that story is that before 1986 the tax base was considerably narrower. Rich people used to have a lot more loopholes and deductions of which they could avail themselves. The 1986 law closed a lot of those loopholes, but also cut the top rate.

But another part of the story is that there used to be more tax brackets. Right now a single person earning $550,000 a year pays the same marginal rate as a person earning 10 or 50 times as much. Under the old tax code, the top rate was reserved its top rate for the super-duper rich.

Ocasio-Cortez seems to have something like this in mind when she tells Cooper, “Once you get to the tippy-tops, on your $10 millionth dollar, sometimes you see tax rates as high as 60 percent or 70 percent. That doesn’t mean all $10 million dollars are taxed at an extremely high rate. But it means that as you climb up this ladder, you should be contributing more.”

In other words, she’s not saying that everyone who pays the current top rate should see their taxes raised to 60 or 70 percent. Rather, a small number of ultra-rich people should pay at that rate. This is obviously a controversial proposition that will strike some as unfair and others as counterproductive to the economy. But it’s pretty much in line with the cutting-edge work of progressive-minded tax economists.

The empirical and theoretical case for higher taxes

MIT’s Peter Diamond and Berkeley’s Emmanuel Saez relaunched this debate with a landmark 2012 paper that argued for a 73 percent top income tax rate in the United States.

This conclusion relies on two subsidiary points. One is the notion that for the very rich, the subjective value of an extra dollar is essentially $0. In other words, while a poor person’s life may get a lot better if he gets a little bit of extra money, someone like Mark Zuckerberg isn’t going to care at all.

It follows that regardless of how much money we think the government should spend, we should be squeezing the richest people as much as possible to keep taxes lower on the less wealthy who will miss the money more. They then do empirical calculations that lead them to estimate that a rate of 73 percent or so would maximize revenue — higher than that and taxation becomes counterproductive because people work less.

In a separate paper that Saez wrote with Thomas Piketty and Stefanie Stantcheva, the authors argue for an even higher rate on somewhat different grounds.

Their argument is that, empirically, CEO pay and pretax inequality is higher in countries with lower top marginal tax rates. In lower tax countries, they believe, CEOs work really hard to maximize their own pay whereas in higher tax countries they accept lesser compensation, which leaves more money left over for other people.

An even more aggressive 2016 paper from Benjamin Lockwood, Charles Nathanson, and Glen Weyl argues that confiscatory taxation would be good for the economy because it would discourage talented people from entering lucrative lines of work. In a world of low taxes, they show, talented people have strong incentives to work in legal or financial professions rather than be teachers or research scientists. But the social reward to having really good traders or corporate lawyers is either low or negative, whereas the social reward to having excellent teachers and scientists is high.

So while Ocasio-Cortez’s proposal is certainly extreme relative to the policy status quo — and unquestionably something many economists would denounce as economically ruinous — it’s actually moderate compared to what Saez, Piketty, and Stantcheva, or Lockwood, Nathanson, and Weyl call for since she’s sticking with the “mere” goal of raising revenue.

The Green New Deal is supposed to rely on deficit spending

A separate question from all of this tax policy is whether a super high tax rate could raise enough money to finance a Green New Deal. That, in turn, depends in part on what exactly you think such a deal should entail.

Despite the hype around the concept, it is currently very far from being a concrete set of policy proposals to which one could attach a price tag.

One reason is many of the greatest enthusiasts for the Green New Deal explicitly don’t want the spending to be “paid for” at all. They frame the concept as a “New Deal” specifically to draw an analogy to FDR’s famous economic recovery program, which didn’t rely on new taxes to fund itself. As Stephanie Kelton, Andres Bernal, and Greg Carlock write:

The federal government can spend money on public priorities without raising revenue, and it won’t wreck the nation’s economy to do so. That may sound radical, but it’s not. It’s how the U.S. economy has been functioning for nearly half a century. That’s the power of the public purse.

As a monopoly supplier of U.S. currency with full financial sovereignty, the federal government is not like a household or even a business. When Congress authorizes spending, it sets off a sequence of actions. Federal agencies, such as the Department of Defense or Department of Energy, enter into contracts and begin spending. As the checks go out, the government’s bank ― the Federal Reserve ― clears the payments by crediting the seller’s bank account with digital dollars. In other words, Congress can pass any budget it chooses, and our government already pays for everything by creating new money.

This is precisely how we paid for the first New Deal. The government didn’t go out and collect money ― by taxing and borrowing ― because the economy had collapsed and no one had any money (except the oligarchs). The government hired millions of people across various New Deal programs and paid them with a massive infusion of new spending that Congress authorized in the budget. FDR didn’t need to “find the money,” he needed to find the votes. We can do the same for a Green New Deal.

This is, of course, more or less how Republicans approach their own budget priorities. When Ronald Reagan wanted to increase military spending and cut taxes, he didn’t “pay for it” — he just did it. George W. Bush did the same and then Donald Trump did the same again. Whether or not it’s true that these rounds of tax cuts spurred enough economic growth to make everyone better off on net, the proponents of these policies believed they were important to unleashing economic growth and so they went ahead and did it.

By the same token, the official Green New Deal position is that drastically curbing climate change is critically important and everyone will be better off if we do it, so we should go do it rather than arguing about the budget.

Most practical politicians in the Democratic Party are uncomfortable with that line of argument. Bernie Sanders’s 2016 campaign website had a whole “How Bernie Pays for His Proposals” section specifically pairing each proposed new program with a proposed offsetting tax increase — thus demonstrating the seriousness of his ideas and thinking. Ocasio-Cortez, somewhat similarly, seems to want to make the case that her ideas represent rigorous budgetary thinking and thus proposes a tax-based offset.

Regardless, however, the 70 percent figure isn’t just a random number a young House member plucked from thin air — it represents cutting-edge empirical research on how to maximize federal revenue.

Matthew Yglesias co-founded Vox.com with Ezra Klein and Melissa Bell back in the spring of 2014. He's currently a senior correspondent focused on politics and economic policy, and co-hosts The Weeds podcast twice a week on Tuesdays and Fridays. Before launching Vox, he was the author of the Moneybag column for Slate and before that he wrote and blogged for Think Progress, The Atlantic, TPM, and The American Prospect. Yglesias is the author of two books, most recently "The Rent Is Too Damn High" about the policy origins of the middle class housing affordability crisis in America. Yglesias was born and raised in New York City, but has lived in Washington DC since graduating college in 2003.