It’s Time for Federal Workers to Get Sick

A sickout by unpaid federal employees could bring the impasse—and their status as hostages to the president’s whim—to an end. Federal workers might learn from the successful example set by teachers from West Virginia to Arizona in 2018. 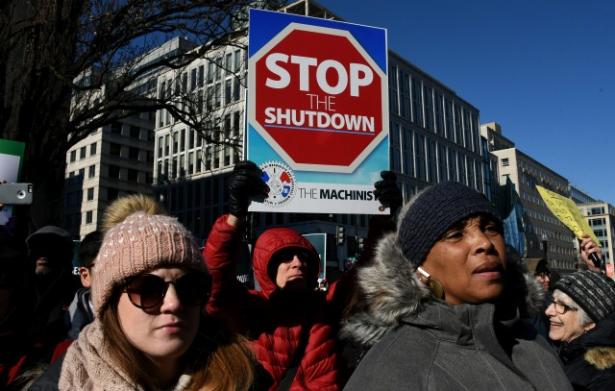 Some hostage situations are only resolved when the hostages themselves act, upending their captor’s strategy.

We have now entered uncharted territory, the longest government shutdown in U.S. history. As President Donald Trump hesitates to call for a state of emergency, which prominent members of his own party oppose and which courts would likely find unconstitutional, a resolution to this standoff is elusive. That brings us to a possibility that would have been unthinkable only a week ago—that collective action by federal workers might be the most plausible mechanism at hand to free the nation from the impasse in which we now are mired.

This partial shutdown can continue only as long as hundreds of thousands of federal workers cooperate with it by working without pay, and often having to do more because many of their colleagues have been furloughed. What if the stress levels these workers are enduring began to sicken them in numbers large enough to impede an array of vital functions, including air travel? Would the Republican senators who approved funding for the affected departments in December—only to back away when President Trump abruptly decided to insist on funding for his border wall—continue to stand with the president as these functions ground to a halt? Or would they be secretly relieved to have to pass a bill over the president’s veto that would reopen government and get workers back on the job? No matter what they say in public, the latter scenario seems more likely.

Federal workers have no right to strike, and the last significant national collective action by a group of federal workers ended disastrously when the Professional Air Traffic Controllers Organization (PATCO) defied the strike ban and walked off their jobs on August 3, 1981, only to be fired by President Ronald Reagan and permanently replaced. In part due to the painful legacy of PATCO, no union has breathed a word about collective action by federal workers to end the current impasse.

But a spontaneous sickout of federal workers in response to the present situation would present a different set of facts than obtained in 1981. First, no union would (or would need to) initiate or coordinate the action. Second, most Americans would understand why it had become intolerable for these employees to work under present conditions. Unlike the air traffic controllers, who were widely portrayed as having deserted highly paid jobs in order to pressure the government for even more money, employees who engaged in a sickout to protest their hostage status would be doing so as a last resort and demanding only that they not be deprived of their paychecks.

Sickouts have long played an important role in the history of public sector labor relations. Because most state governments, like the federal government, prohibit strikes, public workers of all sorts have repeatedly turned in the past to sickouts when no other means of protest was available. They became so common in the inflation-ravaged 1970s, when public workers saw their pay outstripped by the skyrocketing cost of living, that they acquired creative names: Policemen called them the “blue flu,” fire fighters the “red rash,” and teachers “chalk-dust fever.”

Indeed, years before their ill-fated 1981 walkout, air traffic controllers used sickouts in 1969 and 1970 to win important improvements from the Federal Aviation Administration, including the hiring of more controllers to alleviate the stressful workload in the nation’s control towers and centers. The editorial page of The New York Times worried in 1969 about the controllers’ efforts to “circumvent the strike ban” through the sickout tactic. But criticisms of the controllers were more than counterbalanced by the public’s realization of the difficulty of their situation. Those sickouts paved the way for PATCO’s formal recognition as the controllers’ union.

We might already be seeing a return of the sickout to the federal workforce.

We might already be seeing a return of the sickout to the federal workforce. There are indications from Transportation Security Administration (TSA) and some federal prisons that sick calls are rising among those working without pay, and there are reasons to believe this phenomenon will spread.

Federal workers who are beginning to feel symptoms might learn from the successful example set by teachers from West Virginia to Arizona in 2018. Those teachers staged effective collective actions in defiance of the law because they were fighting not only for improvements in their pay and working conditions, but also for their students, and the improvement of underfunded public education systems—just as Los Angeles teachers are now doing. A wave of illness among federal workers would not be an act of selfishness, but a patriotic gesture in defense of the common good and in solidarity with less fortunate workers.  By falling ill, federal employees would be standing up not only for their furloughed colleagues but for suffering contract workers, including janitors, cafeteria workers, and others with low wages, who will get no back pay when this crisis ends.

Most of all, sickened federal workers would be demanding that government be allowed to work again for its employers—the people of the United States. By exercising their own agency, they might not only find that the vast majority of those employers support them, but that they also can send a clear message that henceforth they refuse to be treated as hostages.  In this age of yawning inequality and anemic worker bargaining power, that message might lift the spirits not only of federal employees, but of millions of other American workers.

[Joseph A. McCartin teaches history at Georgetown University.  He is the author of Collision Course: Ronald Reagan, the Air Traffic Controllers, and the Strike that Changed America.]