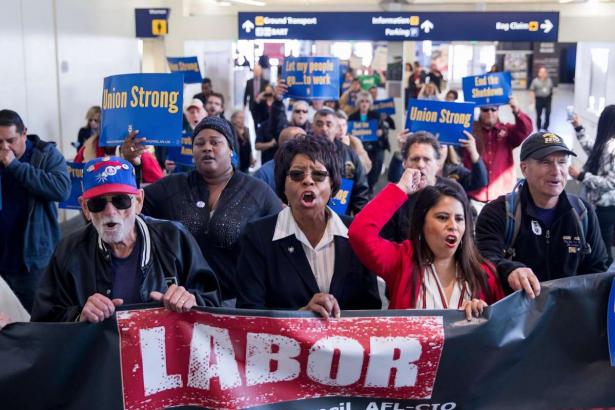 Furloughed federal workers and supporters on a march through Terminal 1 at the Oakland International Airport,Photo: Jessica Christian/SF Chronicle

Beliefs that Hispanics and Asians living in the U.S. won't assimilate or refuse to speak English are based on stereotypes that scholars say are linked to notions of white supremacy.

Viral footage of white Catholic students clashing with a Native American man after the March for Life anti-abortion rally  turned into a politically charged controversy.

There is an intensifying conviction among progressive operatives that internal campaign culture should reflect the very values that 2020 Democratic hopefuls passionately tout on the trail.

With its silly swipes at AOC, the American political establishment is once again revealing its blindness to its own unpopularity.

The Unfinished Business of Bernie Sanders

Now that Sanders wields such enormous power in Democratic politics, the question is, what’s he going to do with it?

Glad the Shutdown’s Over? Thank Workers, Not Just Nancy Pelosi

Trump announced his deal hours after air traffic controllers brought flights in several of the nation’s busiest airports to a crawl.