UHW was an incubator of talent, organizers who are still bargaining for the common good, utilizing the power of the strike, and promoting a political agenda for labor that’s focused on issues, rather than personalities. 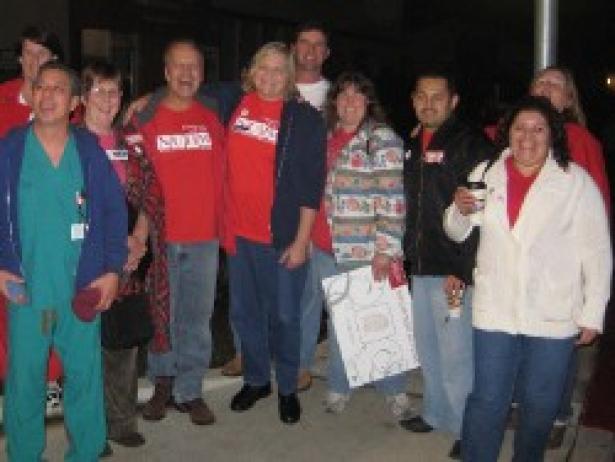 Ten years ago this month, the Service Employees International Union (SEIU) shot itself in the foot, big time.

To silence internal critics, then-SEIU President Andy Stern imposed the largest trusteeship over a local union in the history of U.S. labor.

Hundreds of shop stewards representing 150,000 members in SEIU’s largest California affiliate quit in protest or disgust. Others were purged from their shop-floor leadership roles, along with scores of full-time UHW organizers and contract negotiators who refused to pledge allegiance to Stern’s appointed trustees.

SEIU then spent tens of millions of dollars trying to prevent thousands of angry nursing home, hospital, and home care workers from joining the National Union of Healthcare Workers (NUHW), a rival union formed by pre-trusteeship UHW activists. More than $10 million was squandered on a single federal court lawsuit that sought $25 million in damages from 28 NUHW founders.

Stern’s military style take-over of UHW greatly tarnished SEIU’s reputation for being “progressive.”  It generated bad press for the entire labor movement because the trusteeship lent credence to anti-union propaganda about “union bosses” running roughshod over the rank-and-file and misusing their dues money.

As I documented in a 2011 book, Stern’s costly warfare with NUHW (and its labor allies, UNITE-HERE and the California Nurses Association) definitely diverted organizational resources from a national union campaign for private sector labor law reform in 2009-10. That crucial lobbying effort faltered during President Obama’s early years in office, with the result being further erosion of union bargaining strength ever since.

Stern’s trusteeship left SEIU badly weakened as a political force in California, particularly around issues affecting nursing home and hospital patients and their care-givers. Post-trusteeship UHW quickly lost the respect of other California unions and their political friends in Sacramento. In recent years, the Stern-installed leadership of UHW helped fracture a multi-union bargaining coalition at Kaiser Permanente, wasted more than $30 million on failed ballot initiatives, and lost a third of its membership, due to the forced transfer of home care workers to another SEIU local.

A Decade of Damage

Nevertheless, during a long decade of self-inflicted damage in California, SEIU’s loss of dedicated members, talented elected leaders, and effective organizers has become a net gain for labor as a whole. After being thwarted in their original project of reforming SEIU, Rosselli and other UHW members succeeded in building a new statewide healthcare workers organization that is independent of any national labor union.

Much like the influential alumni network spawned by the United Farm Workers (and profiled in Randy Shaw’s Beyond the Fields), full-time staffers once employed by UHW have gone to work for other unions, central labor councils, labor reform struggles, community organizations, and political campaigns across the country. This new diaspora—from a once exemplary SEIU local– is helping thousands of workers win high profile organizing campaigns and strikes, like the recent LA teachers walk-out, and rejuvenate the unions involved.

In California, hospital and nursing home workers voted to replace SEIU with NUHW in many bargaining units which had strong indigenous leadership before the trusteeship. NUHW now has a statewide membership of 15,000 in about forty bargaining units. The union is known for its militant contract campaigns and involvement in progressive causes like Bernie Sanders’ 2016 presidential campaign and the on-going fight for single-payer healthcare.

In December, NUHW conducted a five-day strike that focused public attention on the need for improved mental health care delivery and better staffing at Kaiser, the state’s largest hospital chain. Four thousand psychologists, social workers, and other therapists rallied and picketed with union and community allies from San Diego to Sacramento.  Like recent teachers’ strikes, their work stoppage generated widespread and favorable press coverage. As part of its on-going contract campaign, NUHW has created a “Kaiser Don’t Deny” website, which enables patients to speak out about the impact of treatment delays, due to understaffing.

Meanwhile, in facilities like Oakland Children’s Hospital, NUHW membership has tripled to 1,200 in recent years as a result of bargaining gains that inspired non-union staff members to join their unionized co-workers.  Ruth Kees, a laboratory worker at Children’s, helped 450 other service and technical employees change unions—a struggle to decertify SEIU that took six years. “SEIU is a union where staff in Washington, D.C. call all the shots and backroom deals are the order of the day,” says Kees. “We have a union that we can control again, where all members are treated with respect.”

Among the many former SEIU-UHW staff members who quit in protest over the trusteeship ten years ago was Samantha Winslow. After working for NUHW, she moved to New York City and joined the staff of Labor Notes, a promoter of union democracy and revitalization since 1979. In her new role, Winslow assists rank-and-file networking among public school teachers which helped lay the groundwork for multiple red state teacher strikes last year and now the work-stoppage by 34,000 teachers in L.A.

As she reported this week, “the first strike in 30 years by the second largest teacher union in the country…was a longtime in the making. It’s been 20 years since some of these same teachers started building a caucus to transform United Teachers Los Angeles in the spirit of other reform movements they had read about in Labor Notes, including Teamsters for a Democratic Union.”

Among the UHW alumni helping to strengthen the UTLA are Glenn Goldstein, Brian McNamara, and Grace Regullano. Before becoming a key organizer of charter schools in Los Angeles, Goldstein spent three decades doing  successful healthcare industry organizing for SEIU. His career was cut short by the UHW trusteeship, after which he was punished financially for trying to make his old national union more democratic and accountable to its membership. SEIU’s costly and retaliatory lawsuit only succeeded against 16 defendants. But it left Goldstein personally responsible for paying $73, 850 in monetary damages as part of a larger $1,578,000 judgment, half of which was covered by UNITE HERE, as an expression of solidarity with NUHW. (For more on this legal setback for union democracy, see: https://uniondemocracy.org/who-will-be-the-next-nuhw-16/)

Elsewhere in California, John Borsos–another target of SEIU’s punitive litigation—is now aiding public school teachers in Sacramento. Laura Kurre was pre-trusteeship educator director of UHW and today plays the same role at the California Federation of Teachers. Sarah Callahan has held top positions in both CFT and the Courage Campaign. In Milwaukee, two veterans of the UHW trusteeship fight, Ben Ward and Ed Sadlowski, are the new director and deputy director, respectively, of the Milwaukee Teachers Association.

Other UHW alumni have taken their experience in health care and put it to good use on behalf of RNs in Californa, Massachusetts, New York, Pennsylvania, Oregon and Rhode Island. For example, Dana Simon helped build UHW prior to the trusteeship and then went to work for its east coast counterpart, known as SEIU 1199. He was one of several SEIU organizers who resigned from 1199 in protest over the national union trusteeship in California. Today, Simon is a leading contract campaign organizer and negotiator for the Massachusetts Nurses Association.

Two former UHW activists have been hired by central labor bodies in the Bay Area. Kim Tavaglione is the new political director of the San Francisco Labor Council and Liz Ortega serves as Executive Secretary-Treasurer of the Alameda County Labor Council. In Spokane, Liz Moore directs the Peace and Justice Action League, which promotes the principle of non-violence in social change organizing, while seeking an end to police misconduct and mass incarceration.

Among other UHW alumni, who switched to community organizing, is the Tenderloin Housing Clinic’s own Pratibha Tekkey.  Tekkey directs multiple programs as THC Organizing Director; in her new role, she has become a leading local defender of affordable housing. Former UHW researcher Emily Gordon now overseees strategic research at the Center for Popular Democracy, which defends public education, workers’ rights, economic justice, and fair treatment of immigrants. Post-trusteeship, Ben Eichert became a campaign staffer for a US Senator and now directs Greenpower, a leading advocate for community choice aggregation (aka clean energy) in California.

Some ex-UHW staffers migrated to academia and now hold faculty positions at the University of California, Brown and Columbia Universities, and Middlebury College.  One casualty of the trusteeship, Charlie Eaton, teaches at UC-Merced, where he has become an expert on the student loan debt crisis and other higher education trends. At Columbia, assistant sociology professor Adam Reich drew on his experience as a UHW organizer when he wrote With God On Our Side (Cornell University Press, 2007).

This in-depth study of Catholic hospital worker organizing focuses on Santa Rosa Memorial and a union drive there that began before the UHW trusteeship. Reich documents how rank-and-file initiative, community-labor coalition-building, and a sophisticated “corporate campaign” strategy overcame daunting obstacles to unionization, including SEIU’s post-trusteeship abandonment of the workers involved. They re-organized under the banner of NUHW, won bargaining rights in their own hospital, and then aided the unionization of three other facilities in the same Saint Joseph Hospitals’ chain.

In the field of journalism, former UHW (and then NUHW) communications coordinator Leighton Woodhouse has become an acclaimed documentary film-maker and political correspondent for The Intercept.

According to former UHW legislative/political director Paul Kumar, pre-trusteeship UHW was an invaluable training ground for union staffers, even before the conflict with SEIU headquarters led to trusteeship. Before 2009, some UHW alumni moved from healthcare to the entertainment industry, where Steve Sidawi and Lauren Perez became top organizers for SAG-AFTRA and John Kosinski became a staffer for the Writers Guild of America. After John Marshall left UHW, he was hired as a researcher for the UFCW and worked on its Wal-Mart campaign. Richard Barrara became Secretary Treasurer of UFCW Local 135 and Jim Araby, another UHW alumni, continues to serve UFCW Local 5 as its strategic campaign director.

Kumar was still on the UHW payroll at the time of the trusteeship and paid a heavy price for siding with the membership. He and others similarly purged experienced what they believe was a concerted effort to “blacklist” them from other union employment. SEIU’s costly attempt to win money damages from Kumar ultimately failed in court, as did any efforts to block him from doing further government affairs work, after 18 years of dedicated service to SEIU affiliates on both coasts.

In the past decade, Kumar served as political director for Save the Bay, a leading environmental group. He has provided health policy advice to the San Francisco Labor Council and been a paid consultant for NUHW, various non-profits, and many political campaigns. For Kumar and others driven out of SEIU by Andy Stern, the experience of the 2009 trusteeship was politically painful and personally bruising. Yet they find consolation—and political vindication– in the fact that so many past UHW members, staffers or elected leaders have continued to play productive roles in labor and related movements.

“The history of success we had, before the trusteeship, lives on its alumni network,” Kumar contends. “UHW was an incubator of talent, organizers who are still bargaining for the common good, utilizing the power of the strike, and promoting a political agenda for labor that’s focused on issues, rather than personalities. The union culture that SEIU tried to destroy has survived in NUHW and been infused in other resurgent unions.”

[Steve Early is a former organizer for the Communications Workers of America and a longtime supporter of the National Union of Healthcare Workers. His book, The Civil Wars in U.S. Labor: Birth of a New Workers Movement or Death Throes of the Old? dealt with the SEIU-UHW trusteeship and related conflicts a decade ago.  He can be reached at Lsupport@aol.com)

Steve Early is a longtime labor journalist and author of Save Our Unions: Dispatches from a Movement in Distress (Monthly Review Press, 2013), The Civil Wars in U.S. Labor (Haymarket Books, 2011) and Embedded With Organized Labor (MRP, 2009)]