Lessons from the FBI’s Secret War on Activism

The FBI had played its role as the “political police of the national government,” Noam Chomsky wrote and the government maintained to the bitter end that it had a right to undermine an organization just because of its ideas. 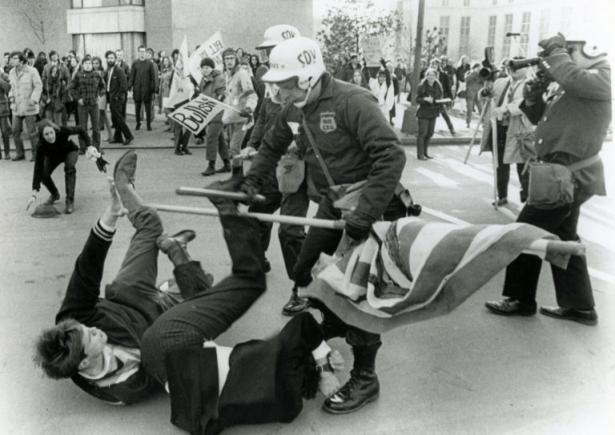 The Federal Bureau of Investigation tried to destroy left organizations and the black freedom movement during the last major upsurge in radical politics in this country, in the 1960s. It looks like they are trying to do it again.

The bureau’s Cointelpro (Counterintelligence Program) was a secret operation the bureau carried out against left-wing groups from 1956 to 1971. It first targeted the Communist Party, and was expanded to the Socialist Workers Party (SWP) in 1961 and the “New Left” in 1968. In a secret 1968 memo, longtime FBI director J. Edgar Hoover directed his agents to “expose, disrupt and otherwise neutralize the activities of various New Left organizations. We must frustrate every effort of these groups and individuals to consolidate their forces or to recruit new or faithful adherents.”

Hoover directed his venom especially at the Black movement, writing that “we must prevent the rise of a new black messiah.” The FBI and its accomplices in the Chicago Police Department admitted to the 1969 assassination of Chicago socialist and Black Panther Party leader Fred Hampton in his bed along with his bodyguard Mark Clark. The circumstances around the murders of Martin Luther King, Jr. — who was harassed by the FBI for years — and Malcolm X remain suspicious.

Although Cointelpro was ended after it was exposed in 1971, and the FBI investigation of the SWP ended in 1976, their practices of government surveillance, infiltration and disruption of radical groups have never gone away.

Most of what we know about Cointelpro resulted from a lawsuit, Socialist Workers Party v. The Attorney General, which the SWP filed in 1973 through its attorney Leonard Boudin, the finest movement constitutional litigator of his time. In 1986, a federal judge in Manhattan awarded the party $264,000 in damages. The case is extraordinarily important today, when socialist ideas are growing in popularity and socialists are getting elected to office for the first time in almost 100 years.

The FBI first investigated the SWP in 1940. When the bureau added it to Cointelpro in 1961, a secret memorandum said the party had been “openly espousing its line on a local and national basis through running candidates for public office and strongly directing and/or supporting causes such as Castro’s Cuba and integrations problems… in the South.”

The discovery aspect of the SWP lawsuit took eight years and yielded an astounding 10 million pages of documents. The judge told Boudin, “You are not going to believe what’s in these documents.”

The SWP was a Trotskyist group which traced its origins back to the anti-World War I left wing of the Socialist party led by Eugene Victor Debs. It advocated for a democratic form of socialism unlike what existed in the Soviet Union. At its peak, it had 3,000 members including its youth group. It had a weekly newspaper, a monthly magazine, an international news service, a publishing house and owned a five-story headquarters in an old ship repair building in the West Village. It had chapters in most major cities and on many college campuses. It helped organize some of the largest demonstrations against the Vietnam war.

The 1986 trial took three months. What was proved? The FBI had used 300 infiltrators and 1,300 informers over a 15-year period, and burglarized SWP offices and members’ homes more than 200 times. Wiretaps had been employed for 20,000 days and listening devices for 12,000. Landlords were contacted in an effort to get people evicted and workplaces were visited in order to get people fired.

The agents were also instructed to stir up mistrust in the movement and create antagonistic factions inside the party, such as by sending anonymous letters to a prominent black SWP member insisting that he and his fellow “party monkeys” should leave and join the Black Panthers. Agents tried to get the party to engage in illegal activities, such as by handing out flyers at an antiwar demonstration calling the SWP and other organizers cowards for not wanting to get “battle wounds” fighting the “pigs.”

The 1986 victory was historic. The federal court decision held that advocating for socialism and being in a socialist organization were legal, ruling that “these disruption operations were directed at the kind of political activities that the SWP had a constitutional right to carry out.”

“For the first time the FBI’s disruptions, surreptitious entries and use of informers have been found unconstitutional,” the Nation magazine wrote. “All in all, it amounted to a domestic contra operation against a peaceful political organization, for no reason other than its ideological orientation.”

The FBI had played its role as the “political police of the national government,” Noam Chomsky wrote. The federal government, represented by then-U.S. Attorney Rudolph Giuliani, maintained to the bitter end that it had a right to undermine an organization just because of its ideas. No government official who participated in the campaign against the SWP was ever prosecuted, and no congressional hearings were ever held.

In the post-9/11 era, even the modest legal restraints that were imposed on law enforcement surveillance and infiltration of political activity during the 1970s have been tossed aside. The surveillance state has grown ever larger with the creation of a Department of Homeland Security that works closely with the FBI and local police departments to monitor lawful political dissent.

The government, represented by then-U.S. Attorney Rudolph Giuliani, maintained to the bitter end that it had a right to undermine an organization just because of its ideas.

The FBI has already infiltrated Muslim mosques and admitted to a program targeting those whom they call “black identity extremists,” that is, black people organizing to oppose police violence. Under Obama, the FBI and Homeland Security worked closely with local police departments in the fall of 2011 to monitor and later break up Occupy encampments in various cities.

We need to build solid organizations that can withstand government attempts at disruption. Here are some key practices to remember:

Socialism is no longer a dirty word. We are growing in numbers and strength. It would be naïve to think that the powers that be are not cognizant of the threats to their power and privilege and are not taking steps to block it.

[Michael Steven Smith is a past board member of the Center for Constitutional Rights. He co-hosts the nationally broadcast weekly radio show Law and Disorder with Heidi Boghosian and is the author of the forthcoming book Lawyers For the Left:  In the Courts, In the Streets, and On the Air, to be published by OR Books.]