film One of Film’s Greatest Epics Is a 7-Hour Adaptation of Tolstoy's War and Peace. Really.

The biggest blockbuster in Soviet history is returning to movie screens in 2019. It’s compulsively watchable — and absolutely worth seeing. 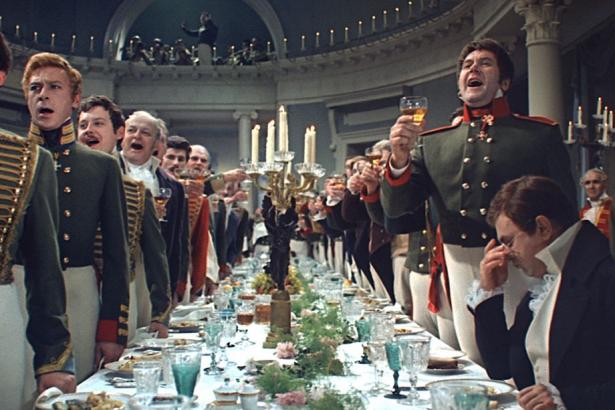 Good critics avoid hyperbole as a rule, and declaring a single film to be the greatest ever made makes a professional sound like an undergrad who just saw Citizen Kane for the first time. And even some voracious readers are guilty of seeing the writings of Leo Tolstoy as an essential chore. Having said all that: In any serious, sober-minded discussion about what could be selected to exemplify the farthest reaches of cinema’s capabilities, War and Peace — Sergei Bondarchuk’s largely unseen adaptation of Tolstoy’s literary classic — would have to be on the table.

The story of its production, of a man moving heaven and Earth to realize a staggering vision, boggles the mind to this day. The adaptation set a new standard for “epic,” capturing all the passion and tragedy of Napoleon’s clash against the Russian aristocracy in its seven-hour sprawl. Anyone who hears “431 minutes of War and Peace” and imagines an airless museum exhibit passing itself off as a film has another thing coming.

The film’s larger-than-life legend begins in 1961, when Bondarchuk commandeered the largest budget the USSR had ever seen for a single motion picture. Released in four parts in 1966 and 1967, it was a colossal success in its original homeland run as well as a worldwide sensation, and playing as a four-night special on ABC in 1972 after having set a new record for highest ticket cost — as steep as $7.50, the equivalent of dropping $56.52 on a ticket today, and a big step up from the $1.20 rate in place at the time — during theatrical screenings of an abridged six-hour edit in the US. The 1966 Oscar for Best Foreign Language Film was just the feather in its cap — er, shako.

But the difficulty of preserving, displaying, and distributing such a massive piece of work (a whopping 20 canisters of film reels made transportation a sizable hassle) all but sealed it away from the public’s access, excepting the occasional repertory run of a badly beaten-up copy. Until now.

The good folks at Janus Films have undertaken the herculean work of rebeautifying Bondarchuk’s footage, and in 2019, they’re getting it back out there: First, a run at New York’s Film Society of Lincoln Center starting Friday, then a run in Los Angeles, other major cities, and finally, a video/digital release later in the year.

The result of their efforts stands head and shoulders above its contemporary cinema, a triumph of unmatched scale that makes visible the fire and madness raging in a work of great literature that many look at as impenetrable. Film students, history buffs, and anyone else who’s ever been cowed by the splendor of the moving image — that covers everybody, right? — can appreciate the novel’s brawn when inflated to such dizzying proportions.

In a big-picture sense, Bondarchuk’s adaptation of War and Peace owes its existence to an international dick-measuring contest.

In 1956, a take on Tolstoy’s doorstopper novel by Hollywood luminary King Vidor inadvertently launched a competition that would yield the seventh art’s high-water mark. Vidor’s version — which tapped Henry Fonda and Audrey Hepburn to carry its 208 minutes — earned plenty of Academy love without the box-office receipts to match, but played like gangbusters overseas when a subtitled version finally made the trek to Russian theaters in 1959.

Still, government apparatchiks didn’t like seeing Fonda and Hepburn’s faces filling their people with ideas about Western excellence. So culture minister Yekaterina Furtseva commissioned a red-blooded production from the homeland that would “surpass the American-Italian one in its artistic merit and authenticity,” as the open letter she published in state press announced. It was to be “a matter of honor for the Soviet cinema industry.”

Because the position of director was to be filled by what was essentially an electoral college of Kremlin officials, young gun Sergei Bondarchuk scored the coveted gig by virtue of being more identified with Khrushchev’s era than many of his more accomplished Stalinist elders. He recognized that a once-in-a-lifetime opportunity had fallen into his lap in the form of a blank check drawing on an infinite bank account. Riding the wave of nationalist sentiment, he put a small fortune of 8.29 million rubles to work on a spectacle that would blow his overseers away. With the administration’s notoriously short patience for failure in mind, he literally directed the film as if his life depended on it.

It’s tough to say definitively, but this critic is fairly certain that no single filmmaker in the medium’s history has ever been granted the level of access afforded to Bondarchuk during War and Peace’s six-year production process. In addition to having a gargantuan sum of money at his disposal, Bondarchuk had his pick of the Soviet Union’s finest playwrights to draw up his script.

He filled his opulent sets with chandeliers, furniture, and other 19th-century relics on loan from over 40 museums across the USSR. The military advisers acting as Bondarchuk’s consultants gave him the go-ahead to marshal thousands upon thousands of actual soldiers for use as extras in his psychotically ambitious battle scenes. If it’s not yet clear that the man was drunk with power, he went right ahead and cast himself in the lead role of Pierre Bezukhov.

My favorite detail of all: Bondarchuk was insistent upon using the meticulously bred Borzoi dogs for a fox-hunting sequence in keeping with the national tradition, except that the noble-bred species had grown uncommon. He managed to find 16 of them, only to discover that the canines had lost the tracking instinct. His fix? Borrow a pack of wolves from the state zoological department, get some scent hounds from the Ministry of Defense to chase down the wolves, and then send the Borzois to follow the hounds. Convoluted? Yes. Needlessly expensive? Sure, but when you’re working without limits, who could possibly care?

The director’s plan to hook the masses relied on shock and awe, bending even the most stubborn detractors into submission via the sheer magnificence of his vision. Within the tangled web of passion between Natasha Rostova (Lyudmila Savelyeva), Pierre Bezukhov (Bondarchuk), and Andrei Bolkonsky (Vyacheslav Tikhonov), the crew mounted a series of astonishing set pieces, continually topping themselves.

The fox-hunting bit that Bondarchuk worked so hard on came out like a psychedelic swirl of gnashing teeth and gaping eyeballs, and early clashes at Austerlitz and Schöngrabern tease the viewer with a taste of the sum total of the film’s might. For his grand finale, Bondarchuk recreated the burning of Moscow by razing a vast swath of land in a village just outside the city. The terror in the eyes of the extra dashing alongside Pierre through the inferno appears as authentic as it gets. Say what you will about the wonders of CGI, but sometimes there’s just no substitute for the real thing.

Bondarchuk’s staging of the conflicts between the Napoleonic and Russian forces make Apocalypse Now look like a particularly audacious senior thesis film. Aerial shots that stretch out for miles survey the full breadth of Bondarchuk’s army, assuming a God’s-eye-view so that he may squeeze as many bodies into a frame as possible. On the ground, custom rigging enabled how-the-hell-did-he-do-that tracking shots, wending in and out of bayonet stabbings, horse deaths, and chains of detonations to capture all the hysteria in these orgies of brutality. It might have taken approximately the same amount of effort and resources to mount an actual ground invasion.

Though he’d been appointed a de facto keeper of the cultural gates, Bondarchuk found plenty of room to get his own kicks through indulgent formal experimentation. The scenes of dialogue bristle with their own weird sense of artistry and beauty. Even the barren snow has been shot with a lushness that imbues a majesty in the blankness, and the footage is gussied up with double-exposures predating the arrival of the word “trippy” in the Russian language.

At the conclusion of the film’s second segment, Bondarchuk plays around with rhythm by inserting a split-second shot of a jingling chandelier to punctuate Pierre’s initial courtship of Natasha. One of the most indelible scenes takes place during a roaring night of revelry among the nobles, as Bondarchuk literalizes their stupor with aggressive, whirling cinematography to make a tornado out of their party. It’s gloriously disorienting, and still, it’s hard to miss the real live bear chugging a stein of beer. One might wonder what this bear is doing, tearing it up with human beings, but Bondarchuk’s is a film of “why not?” and not “why?”

Like In Search of Lost Time or Infinite Jest, War and Peace is preceded by an intimidating reputation. Clocking in at north of 1,200 pages and boasting hundreds of characters (many of whom share tough-to-keep-straight family names), it still scares off all but the most determined readers. There’s the old cocktail party line about highbrow types who split their lifetime into two periods: before and after they conceded they’d never read Proust; it’s easy to succumb to the same self-limitations with Tolstoy.

Bondarchuk wasn’t playing to the monocle-polishers, however. His goal was nothing less than for every living citizen of Russia — if not the world — to see his movie, preferably multiple times. He wanted the finished product to be opulent, titanic, heartbreaking and above all, compulsively watchable. Along with screenwriter Vasily Solovyov, he pruned a handful of the original novel’s subplots and worked the thorny historical philosophizing into a palatable episodic structure. Much in the same respect that Shakespeare pitched himself first and foremost to the groundlings, Bondarchuk fancied his work something closer to a prestigious binge-watch than a lofty high-culture object.

His labor has the same origin point as the Janus Films restoration team’s. In Bondarchuk’s adapting of War and Peace and now Janus’s reinvigoration of the film, they don’t so much blow the dust off a classic as relight a fuse. The unadulterated recklessness coursing through all seven gripping hours makes getting some capital-c Cultcha feel like the farthest thing from fulfilling an obligation of good taste. If only Ulysses could be made to feel like Dunkirk on an inhuman dose of steroids, maybe we’d all get that much closer to being well-read.

War and Peace's first run is at New York’s Film Society of Lincoln Center starting on February 15th, then a run in Los Angeles, other major cities, and finally, a video/digital release later in the year.

Charles Bramesco is a film and television critic living in Brooklyn. In addition to the Guardian, his work has also appeared in Rolling Stone, Vanity Fair, Newsweek, Forbes, Nylon, Vulture, The A.V. Club, Indiewire, The Dissolve, Vox, and Pitchfork.