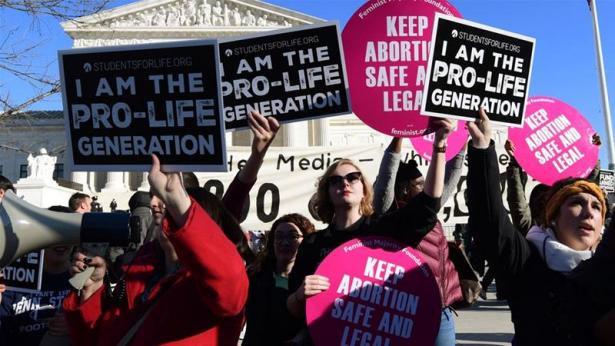 Protesters on both sides of the abortion issue gather outside the Supreme Court in Washington, Friday, January 19, 2018, during the March for Life ,Susan Walsh/AP Photo

The Trump administration says it will prohibit taxpayer-funded family planning clinics from referring women for abortions, a move likely to be challenged in court by abortion rights supporters.

The administration's plan would also prohibit family planning clinics from being housed in the same location as abortion providers.

Meanwhile, Planned Parenthood has said the administration appears to be targeting them and called the policy a "gag rule".

"The implications of the Trump-Pence administration's attack on Title X with a gag rule are staggering," tweeted Leana Wen, Planned Parenthood's president.

"It compromises the oath I took to serve my patients and help them make the best decisions about their health," she added, using the hashtag #NoGagRule.

The final regulation was published Friday on an HHS website but would not be official until it appears in the Federal Register.

The department said there could be "minor editorial changes" to the regulations while a department official confirmed to the Associated Press it was the final version.

The grant programme costs taxpayers about $260m a year.

Abortion is a legal medical procedure in the United States, but federal laws prohibit the use of taxpayer funds to pay for abortions except in cases of rape, incest or to save the life of a woman.

Friday's announcement was the latest move by Trump to restrict women's reproductive rights.

Reproductive rights groups say Trump has waged a war against them, employing policies that have harmed women's right to choose.

Since taking office, Trump has reinstated and expanded the Global Gag Rule, which bans international organisations that receive US funding from providing abortion services or offering information about the procedure.

Last month, a US judge in California blocked a Trump administration birth control coverage rule, which would allow more employers to opt out of providing women with no-cost birth control, from taking effect in 13 states and Washington, DC.

"It's 2019, yet the Trump Administration is still trying to roll back women's rights," California Attorney General Xavier Becerra said following the ruling. "Our coalition will continue to fight to ensure women have access to the reproductive healthcare they are guaranteed under the law," he added.

But Friday's announcement was praised by abortion opponents.

"We are celebrating the newly finalized Title X rules that will redirect some taxpayer resources away from abortion vendors," Kristan Hawkins, president of Students for Life of America, said in a statement.

Although federal family planning funds by law cannot be used to pay for abortions, religious conservatives have long argued that the programme indirectly subsidises Planned Parenthood.

"This rule intentionally strikes at the heart of the patient-provider relationship, inserting political ideology into a family planning visit, which will frustrate and ultimately discourage patients from seeking the healthcare they need," Clare Coleman, head of the National Family Planning and Reproductive Health Association, said in a statement.