The real 'Green Book' made Jim Crow-Era Travel safer. The documentary, which aired February 25 on the Smithsonian channel, positions Green’s ambitious project as a necessary response to white-supremacist violence—and as a community-building tool. 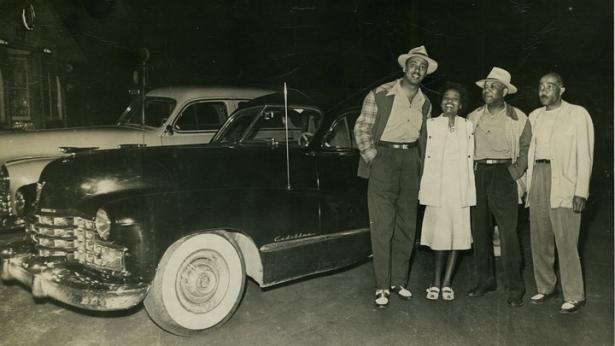 The Green Book, as it is most often called, became an invaluable resource to black people living in, and traveling through, America. , Lake County Historical Society

In 1936, a black postal worker named Victor Hugo Green published the first edition of The Negro Motorist Green Book. At the time, the segregation-era guide was meant to direct black New York City residents to businesses they could frequent without facing the overt discrimination and threats of violence they encountered even up north. Demand soon grew for a more geographically expansive document, and the following year Green compiled and distributed the first national issue. “FOR EXTRA SERVICE … MENTION ‘THE GREEN BOOK,’ ” the cover’s header read, a direct address to the community it served.

The Green Book, as it is most often called, became an invaluable resource to black people living in, and traveling through, America. It cataloged black-owned businesses around the country, directing motorists to establishments that served a wide range of functions. Amid its pages—digitized now at the Schomburg Center for Research in Black Culture in New York—were listings for restaurants, hotels, vacation destinations, barber shops, gas stations, and more. By the early 1960s, it had reached about 2 million people; toward the end of its run, it even included international listings. And now, more than 50 years after the final, 1966–67 edition of The Green Book was published, a new Smithsonian Channel documentary from the filmmaker Yoruba Richen traces the guide’s history and its ongoing significance.

The Green Book: Guide to Freedom, which airs February 25, positions Green’s ambitious project as a necessary response to white-supremacist violence—and as a community-building tool. Throughout the documentary, Richen takes great care to showcase the ubiquity of black entrepreneurship, a phenomenon that the guide both documented and bolstered. “I feel like it gives us such a window to talk about a lot of things that we don’t get to normally talk about when we are looking at the black experience,” Richen, who also narrates the documentary, said when we spoke on the phone recently. “So much of the time, our experience in history is seen through a narrow lens and understanding.”

Richen’s 51-minute documentary is a generous, complex exploration of the artifact’s practical function and its cultural legacy. But it is not, of course, the first film to bring the historic guide into public consciousness. The Oscar front-runner Green Book, directed by Peter Farrelly, launched a critical reckoning late last year amid reports that it mischaracterized its central story. Green Bookfocuses largely on Tony “Lip” Vallelonga (Viggo Mortensen), a white man who learns about the existence of racism after he’s hired to drive the preeminent black pianist “Dr.” Don Shirley (Mahershala Ali) on a concert tour through the Jim Crow–era South. The film has been criticized, including by Shirley’s family, for reported inaccuracies about the musician’s life (and for its prioritization of Tony’s character). But it fails other black subjects, too—among them, Victor Green and the people whose businesses filled the pages of his book.

The Farrelly film dabbles in the sort of predictable melodrama that characterizes many a big-studio movie that purports to address racism: Good white characters are ostensibly changed by their proximity to a real live black person, while the catalytic black character sees no change in his or her own quality of life. Though the film is named for Green’s resource, the titular book appears only a handful of times. In one scene, Tony and Shirley are forced to stay in a decrepit motel after being refused service because the latter is black. The Green Book leads them there, acting as a kind of poverty compass. “It actually only shows places that were kind of dumps, and sort of reduces The Green Book to that, [as though] we only have these terrible places to stay, and that’s not true,” Richen said of the Farrelly film, which she first became aware of after it premiered at the Toronto International Film Festival last summer. “So that’s disappointing and frustrating.”

“And then, too, it only showed them using it in the South, which [is] one of the mythologies about segregation. This country wants to say segregation and Jim Crow only happened in the South. It happened all over,” Richen continued. “The Green Book was created by a New Yorker, with listings in New York. [There were] places in Harlem where black people were not allowed to go to. So this was something that was everywhere.”

Green Book is a narrative drama, and the Smithsonian Channel project is a documentary; there are, understandably, many reasons why their approaches to the subject might diverge. But even so, the differences between the films’ respective representations of The Green Book, and of black American experiences, underscore the importance of Richen’s approach. Where Farrelly’s framing of racism as an exclusively southern problem is as familiar as it is misguided, Richen substantively engages the complexity of black life. Her documentary is notable not simply because it explains the origin of Green’s book. The Green Book: Guide to Freedom also challenges the paradigm its corollary adopts: an exhaustingly insular outlook in which black interiority is an abstraction. By depicting the threats black people faced when both migrating and traveling—while also emphasizing the innovation birthed amid these struggles—Guide to Freedom serves as a corrective.

For viewers who are genuinely invested in learning about the historical text and how black people have navigated everyday travel since the early 20th century, the documentary neatly offers a wealth of knowledge in a compressed window. It also bolsters the information with archival footage. “We went to the National Museum of African American History [and Culture] in D.C., and we got to see some of their home-movie archives,” Richen said of the production process. “And when we saw these archives, I was just like, Oh, this is how I want to tell this story. If we can tell this story as much [as possible] through home-movie archives of traveling, of being on the road, I think that would be a really beautiful way to tell the story, because [most Americans] haven’t seen that footage, but also we can create a road trip for the viewer.”

The Green Book: Guide to Freedom also includes commentary from figures such as the author and historian Candacy Taylor, who has been researching The Negro Motorist Green Book since she was commissioned by a travel-guide company to write about Route 66 several years ago. While reading through existing books about the iconic highway, which stretches from Chicago to Los Angeles, Taylor encountered a glut of nostalgic musings that didn’t account for how dangerous travel was—and often still is—for black people.

In the documentary’s introductory scene, Taylor offers a concise explanation of the directory she’s devoted years to studying. “The Green Book was a great way to understand how you could get from A to B safely,” she says. “And even though it wasn’t all about struggle and fear, there was a seriousness to traveling while black, and there were severe consequences.”

Taylor’s upcoming book, Overground Railroad, is just one part of her Green Book Project, for which she’s interviewed descendants of business owners with listings in Green’s directories. According to Taylor’s research, only 3 percent of the businesses are still in operation, but she’s gleaned a wealth of insights from their legacies: “I found incredibly inspiring stories … I interviewed Martin Luther King’s barber, who used to cut his hair at the bottom of the Ben Moore Hotel, which is a Green Book site,” Taylor said when we spoke over the phone. “And [King’s barber] was there during the Montgomery bus boycott, when it was being strategized at the Ben Moore Hotel in Montgomery. So that was a pinch-me moment, where I’m like, Oh my god, he and King were very close. And he told me a lot of great stories.”

“Their interviews will be archived forever at the Library [of Congress],” Taylor added. “So that feels good—to capture this piece of history before we lose it, because we’ve lost already so much of it.”

HANNAH GIORGIS a staff writer at The Atlantic, where she covers culture.