We need an energetic movement that will fight for abortion without reservation. And that means reclaiming its radical roots—and reclaiming it from big national organizations, including the Democratic Party. 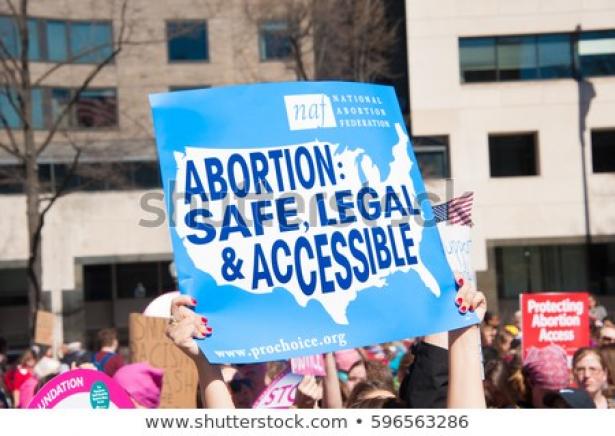 Given the dire state of abortion access, it’s hard to believe that a radical women’s movement in this country once helped win transformative reforms, including decriminalizing abortion, in spite of a Republican president and a U.S. Supreme Court packed with GOP appointees. If you don’t know the history of that movement—or what followed for feminists after the Supreme Court’s Roe v. Wade decision in 1973—it can be even harder to imagine a way forward for abortion rights supporters now. A movement that doesn’t reflect on its own history, including its failures, has an uncertain and rocky future.

We were recently reminded of that when reading Robin Marty’s Handbook for a Post-Roe America, billed as the definitive guide for activists to navigate the current crisis, in which abortions are already inaccessible for many and the U.S. Supreme Court is poised to make things worse.

This problem is not unique to Marty’s book or even to the movement for abortion rights. The stories of the movements and struggles that preceded most major advances in this country are often hidden from history. But for abortion rights supporters, this lack of reflection has led decades of losing ground and a movement that has focused largely on using legal and electoral remedies, timid messaging strategies focused on privacy, and a reliance on nonprofits rather than grassroots action to generate solutions. Without a more comprehensive picture that includes both successes and failures in the fight for universal abortion access, we’re left to repeat mistakes and get more deeply entrenched in strategies that don’t work. With a fuller picture in mind, the hopeful truth starts to emerge. We’ve won before, and we could start to win again.

We can’t afford to, as Marty’s second chapter does, begin on January 22, 1973—the day that the Supreme Court handed down its Roe v. Wade ruling. There was a struggle to win abortion rights, and much of it happened in protests and direct action outside the courts—something we must remember now. Secret or public direct referral services that helped women find doctors to perform safe abortions multiplied in the 1960s and 1970s, alongside pushes for legal reform or repeal. Like many before her, Marty details the history of Chicago’s Jane Collective, and while their actions were heroic and saved many lives, their activism was focused on providing a direct service rather than growing a movement to eventually change the law.

But many actors have galvanized this movement. The movement for abortion was linked to pushes for equal wages for equal work, an end to rape and domestic violence, and paid housework. In 1970, there was a national call for a women’s strike, and more than 50,000 people gathered across the country; one of their demands was for free abortion on demand. After the Redstocking feminists sponsored an abortion speakout in New York in 1969, similar actions spread across the nation. Another group, the Women’s International Terrorist Conspiracy From Hell (WITCH), interrupted proceedings of the American Medical Association (AMA), calling for the organization that supported the banning of abortion in the 19th century to support repeal of criminal abortion laws.

Actions like these pressured politicians and the U.S. Supreme Court, and they helped change public opinion about abortion. In 1973, while Richard Nixon was president and while the court was packed with conservative judges, the political pressure exerted on lawmakers and the courts—and changes in the abortion stances of powerful organizations such as the AMA and the British Medical Association—made it untenable for abortion to remain illegal any longer. Due to external pressure from the feminist movement, internal crises, and industry change, the AMA radically altered its position on abortion provision in the course of six months. That move to support abortion as a decision to be made between a woman and her doctor further shifted public opinion.

It is imperative to remember that the fight for abortion rights took place in many arenas: grassroots organizations, physician organizing and referrals, and in the legislatures. If we are to build a movement capable of clawing back at the restrictions we face, our side is sure to lose if we hold a selective memory of how victory was achieved.

After Roe v. Wade, anti-abortion forces jumped into action. And it was good timing—for them. The social movements of the ’60s and ’70s, including the women’s rights movement, began to fade or take different forms even as their organizing left lasting imprints on the country. Many grassroots organizations were transformed into nonprofits, like the National Organization for Women (NOW) and NARAL.

The boom in nonprofits—which don’t have to choose their governing boards in any meaningful democratic way and have few real accountability standards—has left the abortion rights movement in a rut. This type of “activism” has become the primary channel for debate and advocacy. It relies on supporters who simply donate or vote. The end result is the demobilization of new or excited activists. Their energy is funneled from direct action to singular focuses on fundraising and electing pro-choice politicians.

We must recapture and learn from the movement that was led by everyday women fighting for their rights instead of relying on activism channeled through a 501(c)(3) or requiring a forever commitment to the Democratic Party.

Democrats have moved further and further to the right on the issue of abortion during the last 40 years, and the call from the movements of “free abortion on demand” has been transformed into a stigmatized “safe, legal, and rare.” During the debates over the Affordable Care Act, anti-choice Democrats held health-care reform hostage over the issue of abortion and used it as a bargaining chip. In 2010, Obama issued an executive order reaffirming the Hyde Amendment to further satiate these Blue Dog Democrats. A year later, during negotiations over the bill, women in Washington, D.C., were thrown under the bus and lost Medicaid coverage for abortion. And, more recently, in 2017, Nancy Pelosi stated that abortion should not be a litmus test for those who are running as Democrats. When we take a hard look at our supposed allies’ backpeddling on abortion and the absence of a movement holding our elected officials’ feet to the fire, it’s no wonder that we have slid into this nightmare scenario where Roe is deeply imperiled.

This turn to an electoral strategy wasn’t the only mistake of feminist and reproductive rights groups. In the 2004 book Bearing Right: How Conservatives Won the Abortion War, William Saletan summarizes a series of decisions made by groups such as NOW and NARAL to adopt messaging that inadvertently stigmatized abortion. More recently, Planned Parenthood has used similar tactics whenever its federal funding has come under attack from anti-abortion conservatives. Planned Parenthood and its defenders often minimize the abortion services it provides (it’s only 3 percent of services it offers, the health-care giant says defensively) and even attempt to appease opponents by pointing out that the Hyde Amendment prevents federal dollars from going toward abortion care.

Black feminists and reproductive justice (RJ) theorists criticized these moves. They rejected the narrow, legal grounds mainstream groups use to fight for abortion and birth control, arguments that don’t address the needs of women of color and other marginalized communities. Instead, RJ theorists advocate a human rights-based framework that includes more expansive and radical demands. Their work, found in collections like Undivided Rights: Women of Color Organize for Reproductive Justice and Radical Reproductive Justice: Foundations, Theory, Practice, Critique, should also shape our new movement.

The record is clear: We will not defend and expand abortion access by shying away from talking about abortion. We cannot elect pro-choice Democrats and expect them to be fierce defenders of abortion rights. We cannot ignore mass mobilizations of the pro-life movement at our clinics or marching through our streets, especially as the collaboration between pro-life and far-right groups deepens.

We need a movement like the one that paved the way for the legalization of abortion and fought for abortion without reservation. We need thousands of people to participate, not just as passive recipients of messaging and tactics handed down from national organizations. This isn’t the time to ask energetic new activists to defer to the old ways of doing things. The handbook we really need is one that activists will write together, one that is informed by history and our debates about how we move forward.

Michelle Farber, CNM ARNP is a nurse-midwife and former abortion provider. She is a longtime activist and organizer with Seattle Clinic Defense and the International Socialist Organization. She writes about the intersections of reproductive health, feminism, and midwifery at soontobemidwife.wordpress.com

Dayna Long is an organizer with Madison Abortion Defense and the International Socialist Organization, as well as a past president of the Wisconsin chapter of the National Organization for Women and a former abortion fund volunteer.