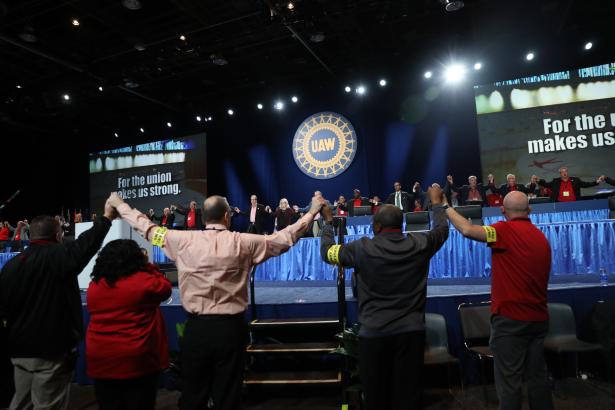 On the eve of contract negotiations, a Detroit native who now serves as national NAACP president praised UAW leaders and their members for being prepared to wage war on the Detroit Three carmakers.

“You only get what you can take,” said Derrick Johnson, who grew to prominence as head of the state NAACP chapter in Mississippi. “If you can’t take anything, you won’t get anything.”

Spotlighting the importance of unity and of speaking as a single voice, he begged the crowd of more than 900 union leaders from throughout the United States and Canada not to allow themselves to be distracted by forces that can only win by dividing loyalties.

“You can’t take or keep without organization. That’s what negotiating is all about,” Johnson said Tuesday. “We are living in a political landscape that has reduced our discourse to tribalism. What tribe you are a part of determines how you position yourself in the discourse.”

He warned the crowd gathered at Cobo Center for a special convention on collective bargaining, which is scheduled to begin this summer with General Motors, Ford and Fiat Chrysler Automobiles, that union workers will lose everything if they allow themselves to pick any team but the UAW.

It is not a political judgment about who is in the White House or any particular political affiliation, but “a realization of how certain conversation has been weaponized” to hurt working men and women, Johnson said.

He noted that his great aunt and great uncle worked as sharecroppers in Tennessee, and the UAW is filled with workers whose families came from coal mining in Kentucky and hardship in Poland and Ireland.

Now a Southerner, Johnson pointed to the BMW plant in South Carolina, the Volkswagen plant in Tennessee and the Nissan plant in Mississippi to illustrate that nonunion workers can’t plan on a steady schedule like what's provided organized workers.

He urged members to avoid division based on race, ethnicity, religion, gender.

“All of a sudden, mistrust settles in,” Johnson said.

The “audacity” that GM, Ford or FCA would make cuts to plants after all the sacrifices that autoworkers have made and during a period of strong profits is simply inconceivable, and they must be “held accountable,” he said.

GM is in the process of idling five North American plants, including Detroit-Hamtramck Assembly and Warren Transmission in Michigan. It ended production last week in Lordstown, Ohio. The UAW is suing over the Lordstown closure, and Unifor, the Canadian autoworker union, is waging a bitter campaign over the scheduled closure of Oshawa Assembly in Ontario.

He emphasized, “We cannot allow a conversation about a border wall to distract us from being one in this room.”

The crowd, which represents about 156,000 workers employed by the Detroit Three, responded with immediate applause.

As the crowd stood cheering, the UAW turned to a video of legendary leader Walter Reuther talking about the need for profit sharing decades ago. What is now a standard in the industry was dismissed at the time as a socialist idea.

“A few years from now,” Reuther said, the companies “will be bragging about this. Only after we’ve fought.”

After the NAACP speech, delegates stood on the floor to say they are willing to strike and willing to walk the picket line and willing to do what's necessary not to take pay cuts or lose cost-of-living adjustments as company executives pocket bigger pay increases.

"No COLA, no contract," the room chanted.

While the UAW negotiates contracts of union workers, the benefits achieved are regarded outside the industry as establishing a competitive baseline for nonunion shops.

UAW Vice President Cindy Estrada questioned the fairness of more pay raises for "rich CEOs" and said from the podium, "We know we can't rest."

Phoebe Wall Howard has worked in the midwest, south and California covering business, politics, government regulation and labor negotiations. She returned to Detroit to cover the auto industry for the Detroit Free Press in 2017. She covers Ford Motor Co., the UAW, consumer trends, driverless technology and artificial intelligence. Contact Phoebe Wall Howard: 313-222-6512or phoward@freepress.com. Follow her on Twitter @phoebesaid. Read more on Ford and sign up for our autos newsletter.