In his latest film the comedian turned director continues to reinvent how the genre uses fear to comment on humanity’s evil. Us is a movie about marginalization, about those “Americans” rising up from the underclasses and dispossessing the masters. 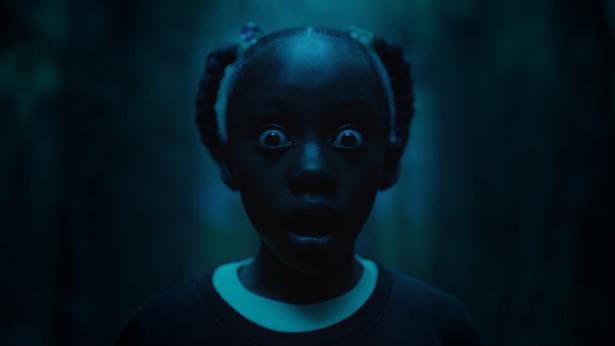 Jordan Peele has given the world a potential successor to Janet Leigh’s Psycho-scream: a black face, skin humidified and reflective, two bulging and bloodshot eyes, and the streaks of two tears. , Universal

It’s perhaps the most indelible image in cinema: Janet Leigh’s scream, her open mouth signaling unmistakable terror, in Alfred Hitchcock’s Psycho. Taken from the movie’s famous shower scene, the shot is now virtually synonymous with the horror genre. Other elements establish the gravitas of Hitchcock’s crown-jewel sequence—the shocking and graphic death early in the film, the reveal of Norman Bates’s slashing, the implied nudity and risqué setup in the running shower—but they are best crystallized in that one, almost audible still.

In his recent run as a bona fide heir to Hitchcock, the comedian and filmmaker Jordan Peele has given the world a potential successor to Leigh’s scream: a black face, skin humidified and reflective, two bulging and bloodshot eyes, and the streaks of two tears. The face belongs to Daniel Kaluuya in Peele’s 2017 Oscar-winning work, Get Out, and lives on in Lupita Nyong’o’s performance in the director’s new movie, Us. That silent expression of fear is now a trademark of Peele’s, and a visceral reminder of what he adds to the game. The very act of incorporating black actors and black creators turns horror inside out, giving the genre new dimensions and new power as social commentary.

Us is not an easily decipherable film, nor is it likely to prompt the same kinds of immediate political takeaways as Get Out. The setup is more like that of a classic slasher, with Nyong’o’s Adelaide Wilson and her husband, Gabe Wilson (played by Winston Duke), embarking on a relaxing family vacation before they’re inexplicably beset by malevolent doppelgängers. Adelaide has encountered these beings before: Us opens in 1986 with a sequence set on a Santa Cruz boardwalk, during which a young Adelaide—played brilliantly by the newcomer Madison Curry—gives us the movie’s first glimpse of the Peeleian scream. In the present day, the Wilsons’ eerie doubles, known as “the Tethered,” wear identical red jumpsuits and wield gold scissors that are way sharper than any available in the crafts aisle. Nyong’o, specifically, is stellar playing both Adelaide and her counterpart, Red, who serves as the mouthpiece and leader for a cadre of chthonic and otherwise silent funhouse-mirror Others. The Tethered are spasmodic, twitchy, guttural versions of the Wilsons, and while the villains’ motives aren’t clear, their intent certainly is: to cause violence.

Peele offers the audience a rapid succession of themes to ponder in Us, and snatches away easy interpretations just as quickly, but it’s really the movie’s stunning imagery that does most of the narrative lifting. The motives of the Tethered are somewhat enigmatic, even after a big reveal near the end, and the story’s ambiguities will sustain several different fan theories. In my screening, the most telling audience reaction came after Adelaide asks her scarier self, “Who are you?” Red’s response is delivered in a demonic deadpan: “We’re Americans.” The theater laughed hard and then settled into an uncomfortable silence as the film moved on with no further exposition. Wait, what?

My operating theory after one viewing is that Us is a movie about marginalization, about those “Americans” rising up from the underclasses and dispossessing the masters of ill-gotten wealth and status. There must be a reason the Tethered choose revolutionary-red jumpsuits as their getup, after all. The film’s references to Jeremiah 11:11, a Bible verse about God’s curse of inescapable evil to a people who’ve forgotten him, seem to confirm that reading. But the movie could also be about immigration, or the increasing salience of “replacement” rhetoric within white-nationalist circles. Us could be about confronting American complicity in imperialism, or gentrification. I could probably connect Us to climate change, given enough time and coffee. The humor to be had in the class and racial performance of the Wilsons, who wear Howard University paraphernalia yet clap on the one and three, certainly means something, too.

While Us doesn’t deliver the same kind of naked send-up of whiteness as Get Out, Peele is still grappling with some of the same ideas, and is still interested in skewering white supremacy and power. But this time, he more obviously draws from the horror canon itself. There are multiple references to horror properties of the 1970s and ’80s, including Steven Spielberg’s Jaws and Michael Jackson’s Thriller, and one fight scene between Gabe and one of the Tethered is so Hitchcockian, it’s unsettling. It seems that, as Peele is commenting on something about the U.S.—or, us—he’s also saying something about the horror genre itself, its DNA, and what it can and can’t do given the material it has.

Horror has always been obsessed with the idea of our shadow selves, and of the Sartrean proposition of meeting our Other. Both the Other and the basic biological fears inherent to corporeality—death, pain, incapacitation, and parasites—have been twin pillars of the genre in literature and film. The best works feature some of both. George A. Romero’s zombie flicks, Richard Matheson’s novel I Am Legend, Don Siegel’s movie Invasion of the Body Snatchers, and even Mary Shelley’s Frankenstein, which might be considered the progenitor of modern speculative fiction, all incorporate body horror and the trauma of seeing ourselves through a glass, darkly. Both of Peele’s works as director hit those same notes, and while pointing out the differences between Get Out and Us will be easy, the films are close kin in that they’re both, straightforwardly, about body snatching.

With the specific context of black faces frozen in terror in Us and Get Out, there’s a meaning to body snatching and meeting the Other that’s weightier than what’s usually found in cinema. The basic themes of horror have been real-life, defining features of the black experience since white strangers stole black bodies from the Continent.

in fact, one could argue that horror as a genre has mostly subsisted on the anxieties of white people, and the fear that the violence visited on the world and on millions of disadvantaged people in their name might rebound from the beyond. There’s a bit of the Middle Passage, and the tales of strange invaders stealing and experimenting on people, in every mainstream story about alien abduction. There are hints of slave rebellions in the setup of zombie movies (and even the concept of zombies is taken from Caribbean stories of necromancy brought over from West Africa). In both Frankenstein and Alien, there are echoes of men such as J. Marion Sims, widely known as the “father of modern gynecology,” who experimented on the bodies of enslaved women against their will and without anesthesia.

The most thought-provoking works of horror engage with a particular tension: The stories’ premises gesture at atrocities committed by white people, but the movies themselves are consumed as popcorn flicks by a largely unthinking audience. Romero’s Night of the Living Dead features a black protagonist who makes his way through a zombie apocalypse “only to be killed by a redneck posse,” as the writer Elliott Stein once put it. Get Out clearly relocates the body-snatching myth within the black historical tradition. And Us makes plain, at least, that the Others coming for American viewers, however frightful, are of the audiences’ own creation.

There’s a reason, perhaps, why black people tend to die first in horror films. Their presence might make those racial themes a bit too obvious, which then might make the lily-whiteness of the space harder to ignore. The absurdity of the annual Halloween smorgasbord of films about haunted suburban houses is exposed when considered alongside the real horrors of displacement in hollowed-out urban cores. The mundanity of murder and brutality of the most violent slashers and the most diabolical manipulators is revealed by even a brief visit to the worst prisons. Who needs Saw when we have Homan Square?

The greatest effect of Peele’s work as a director so far has been to subvert the mainstream offerings of horror, which themselves were originally subversive. It might be, then, that Us’s most powerful mode is as a meta-satire. The film confronts the genre with a Hadean version of itself, this time possessed by disinherited Others with an intent to dismantle. This new self—composed of a growing collection of diverse talent embodied by Peele and his production company—resembles the old. It shares a soul, to quote the film. The tropes and the basic structures employed are similar. The genre is still horror. But instead of Janet Leigh’s scream, the representative image is of a black face, looking to the void.

Us is currently screening at movie theaters around the country.

VANN R. NEWKIRK II is a staff writer at The Atlantic, where he covers politics and policy.