Politics of Culture in US: 'The Invisible Hand of the Market'?

Although this article was published in the original Spanish version last March, now that Julian Assange is in prison the analysis in this piece on “freedom of expression” is even more valid.

April 15, 2019 Arnold August teleSUR
Printer friendly
Politics of Culture in US: 'The Invisible Hand of the Market'? Published April 15, 2019 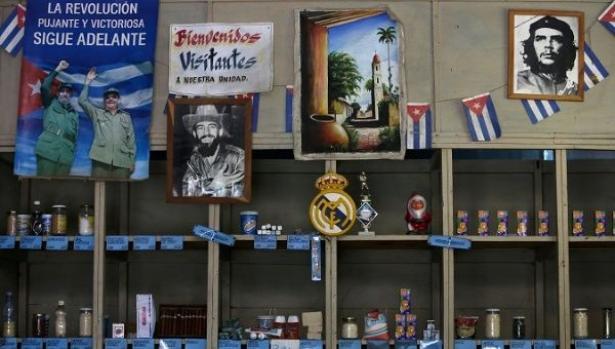 There is a wide-open debate/polemic in Cuba regarding Decree 349 on culture and the drafting of the rules for its future application. The controversy is also stirring on the international scene, especially in North America, Europe and Latin America.

There are those who are in favor of the new code. Others are critical, and indeed some of these are very critical, but they are participating in the Ministry of Culture-led consultation to draft the enabling regulations. There are others who are completely against the new legislation and its regulations, even while the consultations with people in the cultural field are still under way.

However, they are trying to influence the situation in Cuba and, as discussed below, this orientation is widely inspired by the U.S. The method employed is the usual disinformation campaign. It hopes to capitalize on preconceived notions such as the catch-all American “freedom of expression” mantra as applied to political systems in countries other than the U.S. This is nothing new, but there is a novel twist.

It is now applied to artistic endeavours. The campaign targets the sector of the Cuban society dedicated to culture, hoping to win over who those who critically support the new statute in order to create division among individuals involved in culture. Be that as it may, this article deals only with the extremist opponents to the legislation and regulations, both in Cuba and internationally, especially in the United States.

Careful reading of a wide, representative spectrum of opposition articles, social media posts and comments reveals a common point of reference. The U.S. Embassy in Havana tweeted in favour of “artistic freedom” with a very undiplomatic slogan: “No to Decree 349.” The U.S. Assistant Secretary of State for Western Hemisphere Affairs recently stated that the “Gov[ernmen]t of Cuba should celebrate, not restrain, the artistic expression of Cuban people.” Among the shades of “left,” “centrist” and openly right-wing hard-core opposition, including some academics, a common thread stands out.

Furthermore, according to these talking points, there is no Ministry of Culture in the U.S. that would control and guide cultural expressions in that country. The U.S.-centric outlook insinuates, either openly or covertly, that everyone in the U.S. is free to express their artistic talents. The United States is presented as the cultural model for the world, in the same way that it boasts about other features of its society, such as its economy and political process. Many people around the world, and in the U.S. itself, are all too familiar with the U.S. superiority complex. This built-in psyche finds its origins in the “chosen people” notion emerging from the very birth of the U.S. at the time of the Thirteen Colonies in the seventeenth century.

For someone who comes from the Global North and has direct experience of American mainstream artistic expression, such as music, it is obvious that what sells is what is promoted. If the elites can successfully market banality, sex, and violence, then so be it. Profit is the only criterion. Those very few artists who are willing and able (because of their physical appearance above all) to compete in this market are highly rewarded. They then pay back their sponsors by standing out explicitly or implicitly as the expressions of the American Dream come true. Furthermore, U.S.-style extreme individualism is paraded as a value to be worshipped, to which social and international concerns must be completely sacrificed. In sum, the fairy tale narrative pretends that anyone from the slums of America can make it.

However, this process is presented as being spontaneous, without the state’s involvement. It is supposedly the law of supply and demand as applied to the arts. The rationale of the “invisible hand” of capitalism determines what is appropriate in the artistic realm.
Can culture be considered just another commodity?

In the course of social media interaction during the December 8, 2018 Cuban TV Mesa Redonda program, Fernando Rojas, one of Cuba’s vice-ministers of culture, retweeted and commented on one of my tweets. He mentioned UNESCO’s Convention on the Protection and Promotion of the Diversity of Cultural Expressions and the U.S. position counterposing this agreement to the free market.

An investigation ensued, as I was not sufficiently familiar with this controversy. In 2000 in Paris, UNESCO adopted the Convention on the Protection and Promotion of the Diversity of Cultural Expressions. It stipulates that culture is not just another a commodity and recognizes the sovereign right of states to promote and protect their tangible and intangible cultural production, using the measures they deem appropriate. The convention allows states to protect their cultural creation. The U.S. opposed it, claiming to promote true cultural diversity by working for individual liberties, so that everyone has “cultural freedom” and can enjoy his own cultural expressions, not those imposed by governments. But the convention was adopted by a vote of 148 to 2. Guess which countries opposed it? The U.S. and Israel.

Should each country have the right to defend its own culture?

Looking at this superficially, it may seem that that the U.S. government does not impose any norms on culture. Indeed, as “freedom of artistic expression” is assured only in the U.S. (and in Israel), according to this tale, once again the U.S. has the “burden” of exercising its role as the chosen people responsible for teaching everyone on the planet about culture, as it does for democracy and human rights. In fact, taking a page out of that literary classic the Bible (let’s give credit where credit is due), the U.S. has evolved as a “city set upon the hill” to which everyone in the world must look for guidance. Thus, goes the logic, it is all the other countries of the world, except for the U.S. and Israel, who are the violators of artistic freedom.

However, in opposing the Convention’s attempt to save artists’ creative activity from market values by emphasizing the government’s role as a protector of culture, the question arises as to the role played by the U.S. government in this sphere. By default, and by its own admission (as indicated above), in pleading for the supremacy of the market under the guise of “individual freedom” in Paris, one can conclude that the U.S. model imposes the capitalist market as the overriding norm for artists.

Thus, the U.S. government not only protects the market economy within its own country, but by opposing the sovereign right of other countries to form shields to defend a traditional, healthy culture, Washington’s position also constitutes a road map for the U.S. to extend its cultural tentacles into other countries. This is something that we in Canada are very aware of. UNESCO’s defense of sovereign the right to protect and promote cultural production was probably something that irked Washington in Paris in 2005.

To better grasp the issue, a look at the underlying historical context is warranted. Culture, on a par with economic expansion and military and ideological warfare, is part of the U.S. imperialist goal of world domination, irrespective of who occupies the White House. Let us recall Frances Stoner Saunders’s groundbreaking book Who Paid the Piper: The CIA and the Cultural Cold War, first published in English in 1999, then in Spanish in 2001 under the title La CIA y la Guerra Fría Cultural. The book presents a detailed report on the methods whereby the CIA influenced a wide range of intellectuals and cultural organizations during the Cold War.

Since then, and in the wake of similar revelations occurring both before and after Saunders’s book, the U.S. has had to adopt a more subtle way to influence events. It has since funnelled support through front groups not openly tied to the CIA. For example, American journalist and U.S. democracy promotion expert Tracey Eaton, in his December 2018 report, wrote that “over the past three decades, the U.S. government has spent more than $1 billion for broadcasting to Cuba and for democracy programs on the island.”

Democracy promotion, free expression and individual rights are so all-inclusive that that they encompass the cultural issue, which is even listed as one of the goals of this funding. Furthermore, if one clicks on the links to the activities of the front groups, such as the one with the innocent-sounding title “Observa Cuba,” one finds this: “Artists stage four-day sit-down at Culture against 349.”

Now, this is not to say that all or most of the hard-line opponents to 349 are financially linked to the United States. That would be an unfair assertion. However, living just about in the belly of the beast, we know that one cannot have illusions about U.S. foreign policy. The situation is admittedly very complex. For example, one of the most prominent critics of 349, Silvio Rodríguez, drew a clean line of demarcation between critics such as himself, who are participating in drafting the regulations to the law, and the position of the U.S. Embassy and its acolytes.

This situation calls for serious reflection and research before writing, while at the same time seeing the urgency and duty to deal with the disinformation campaign led by the West.

Thus, it was of great help to get the December 16, 2018 “Postcard from Cuba,” circulated by American journalist Karen Wald, who has five decades of experience with Cuba. She writes from Havana with regard to her initial investigation on the controversy over 349: “My guess is that some of what’s behind this [opposition to 349] may be the fact that lots of pseudo ‘artists’ of all kinds make up a strong component of what the U.S. extols as ‘dissidence’ here… Most of those ‘dissident artists’ reported in U.S. press aren’t even known here…”

It seems to me that Cuba not only has every right to defend its culture and the process that is involved in working out its policy, but also that if it does not, it will sink. According to Fidel Castro, culture is the nation’s shield, and is therefore the first thing that must be saved in order to guarantee the progress of the revolutionary process.

The manner in which the U.S. and the hard-line opponents in Cuba, the United States, Europe, and Latin America are zeroing in on 349 and the government officials involved is an indication that culture is indeed a shield to defend the Cuban Revolution. It is a sine qua non if the Revolution is to continue along the path it has followed for 60 years. The U.S. and its allies know full well that the preferred weapon for subverting the Revolution is the cultural war in the wide sense of the term, including ideological, political, and artistic aspects.

Thus, we can see the hollowness of the “invisible hand of the market.” Let us give the last word to Samir Amin, the outstanding Egyptian-French scholar, who recently passed away. He produced a long-standing analysis of how the state in capitalist countries, such as the U.S. far from letting the free market take its course, has a direct hand in its operation. We saw this with the U.S. position on the Convention on Cultural Diversity and we are seeing it again as the empire strives to punch holes in Cuba’s cultural shield. Amin wrote that, when necessary, the “visible fist” helps the “invisible hand” of the free market.

Arnold August is a Canadian journalist and lecturer, the author of Democracy in Cuba and the 1997–98 Elections, Cuba and Its Neighbours: Democracy in Motion and Cuba–U.S. Relations: Obama and Beyond. As a journalist, he collaborates with many websites in Latin America, Europe, North America and the Middle East, including teleSur.  Twitter and Facebook. His website is www.arnoldaugust.com.