Sanders’s socialism is scary for a Democratic establishment that worries a lot about electability. Cue the media hit pieces.

May 1, 2019 Ruth Conniff The Progressive
Printer friendly
Operation Take Down Bernie Published May 1, 2019 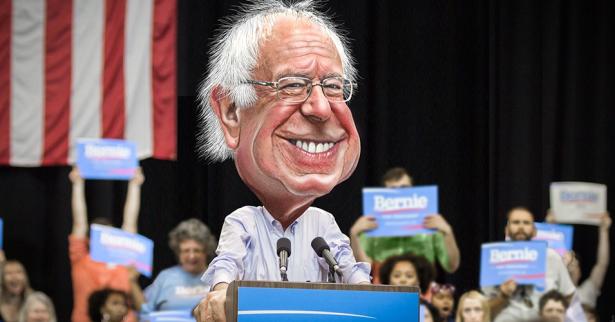 Sanders is such a threat to the regular way of doing business in American politics that he will face massive, well-funded resistance, both during the presidential election season and afterwards., (cc/DonkeyHotey)

Joe Biden’s long-awaited announcement that he is running for President—in a highly produced video with a distracting piano soundtrack—officially knocked Bernie Sanders out of first place in the Democratic field. That’s a relief for a lot of establishment Dems, who have spent the last several weeks ramping up the hits on Bernie, as it has become increasingly clear that the plainspoken Democratic Socialist from Vermont has a credible shot at becoming the Democrats’ nominee in 2020.

Sanders’s socialism is scary for an establishment that worries a lot about electability. More than that, his populist attacks on Wall Street, corporations, and the military-industrial complex, are a genuine threat to the most powerful interests in the country.

Much of the opposition research on Sanders is familiar from the Hillary/Bernie primary in 2016: Bernie the Sandinista supporter, the serial monogamist, the author of some embarrassing but not really reprehensible statements supporting sexual liberation. But in recent weeks these tidbits have been appearing again in news stories across the country, as writers in The Nation, The New York Times, The Washington Post, and ThinkProgress work on taking Bernie down a peg.

Eric Alterman led the charge in a March 28 Nation piece headlined “The Liberal Case Against Bernie Sanders.” Alterman argues that Sanders is the wrong candidate to try to beat Trump, enumerating positions like Sanders’s support for the Sandinista government in Nicaragua in the 1980s, and his criticism of U.S. support for a murderous rightwing military regime there. Alterman is quick to note that he doesn’t actually disagree with Sanders on such matters, but he nonetheless paints the candidate in lurid pinkish tones, suggesting that mainstream America is not ready to for his socialist views.

Thomas Edsall takes the same view in an April 24 opinion piece in The New York Times, titled, “Bernie Sanders Scares a lot of People, and Quite a Few of Them Are Democrats.” Edsall quotes anonymous Democratic pollsters, political scientists, and operatives saying things like, “he could be a huge problem in the suburbs,” and “I worry about his style for swing women voters.” He describes Sanders’s down-at-the-heel lifestyle as a graduate student, his “erratic work history” and “hand-to-mouth existence” when his “fridge was often empty” and—shockingly—he ran extension cords into the basement to pirate electricity from his landlord.

The message is clear: How on Earth can the Democrats expect to win over suburban moms with a candidate like that?!

But millennial voters, as members of the first U.S. generation to be staring down a future of lower living standards than their parents, might find Sanders’s scruffy early life appealingly relatable.

(Sanders himself responded to the ThinkProgress attack in a scathing lettercalling out its parent organization, the Center for American Progress, a corporate-funded, centrist think tank. But William Rivers Pitt of Truthout had the most cogent defense in his article, “Bernie Sanders Made a lot of Money—and He Wants it Taxed,” pointing out that Sanders’s critics are defenders of a less progressive tax system than the one Sanders advocates.)

So which is it? Is Sanders a dangerous socialist who is too scruffy to be President, or is he a millionaire and therefore an inauthentic representative of the working class?

The barrage of attacks on Sanders do not point to any one conclusion. Instead, they center on that vague, eye-of-the-beholder issue of “electability.” The point is that someone somewhere might be turned off by Sanders, and therefore the Democrats should make a safer choice.

But what’s a safe bet in the era of Donald Trump?

Sanders made an explicit appeal to Trump voters during a recent tour of Midwestern swing states, and there are strong signs that he could peel off more than a few. As I heard in conversations with rural voters in Wisconsin and Minnesota, farmers and factory workers were so angry at being neglected and abused by Wall-Street-friendly politicians of both parties that they cast their votes for Trump in order to throw a rock at the system. They also tend to like Sanders.

Trump’s biggest lie of all was that “he was going to defend the working class of this country and take on the powerful special interests,” Sanders declared in a stump speech in Wisconsin. He is setting up his pitch for the general election: Don’t be fooled again; vote for Bernie, the real populist.

It’s not a bad argument.

Republican strategist Karl Rove is impressed by it. After watching Sanders win over a studio audience on Fox News, Rove observed that attacking Sanders for his socialist views “won’t be as easy as Republicans may think.”

Some anti-Bernie Democrats who recognize the appeal of a more progressive candidate (and the liabilities of Joe Biden) are pinning their hopes on the fresher face of South Bend, Indiana Mayor Pete Buttigieg, who was once a Bernie supporter but now says he doesn’t really see the Sanders coalition coming together.

Buttigieg has become the flavor of the month among Democratic candidates and recently made a big move in the polls, bypassing the other candidates except for Kamala Harris, all of whom remain in the single digits, trailing Biden and Sanders, who both get well over 20 percent. Buttigieg has benefited from a friendly shout-out from former President Obama, which came up in a highly favorable interview by New Yorker Editor David Remnick. Like Sanders, Buttigieg makes the case that he understands neglected Midwesterners who voted for Trump. And he appeals to young people as a member of a generation that sees climate change and economic inequality as major issues that they will have to deal with when the older generations are gone.

But Buttigieg is also a Harvard-educated former McKinsey consultant who is good friends with Facebook founder Mark Zuckerberg and looks a lot like a convenient establishment answer to Bernie Sanders. (After Buttigieg’s fact-free town-hall appearance on CNN, Trevor Noah jokedabout the candidate’s “male privilege,” since, unlike all the female candidates who have to prove that they’ve done their homework and offer detailed policy positions, he could just wing it.)

So far, no Democratic rising star has come close to overcoming Bernie Sanders’s big base of support. As of the most recent FEC report, Sanders had raised the most money, and had by far the largest number of small-dollar donors.

But the establishment remains unconvinced. Writers in both The New York Times and The Washington Post take issue with Sanders’s use of the terms “socialism” and “his angry, unrealistic call for ‘revolution’.”

Jennifer Rubin, in one of many Bernie take-down pieces in The Washington Post, writes, “Sanders has made a career of propounding extreme, unworkable views that escape serious scrutiny because ‘it’s just Bernie.’ ”

But those views now seem less extreme and more workable than ever. Ideas like restoring high taxes on the super-wealthy, free public college, and Medicare for All have moved into the mainstream.

And that represents the real threat. It’s not the prospect of a rumpled candidate offending the delicate sensibilities of suburbanites that most worries establishment types. It’s the idea of a genuine threat to what The Progressive magazine founder Fighting Bob La Follette called “the money power” in America.

It’s that money power speaking when you hear the barrage of attacks on Bernie.

And, in this regard, the critics are correct: Sanders is such a threat to the regular way of doing business in American politics that he will face massive, well-funded resistance, both during the presidential election season and afterwards. He is testing the idea that people can actually out-organize money—a very dangerous idea, indeed. And if he becomes President, the resistance he faces will be even greater.

Not since Franklin Delano Roosevelt welcomed the hatred of “organized money” have we had a serious presidential candidate who openly exposed class conflict in America, and stuck up for ordinary citizens against the overwhelming power of the wealthy.

It’s thrilling. It’s dangerous. And scariest of all to some mainstream Democrats, it could actually work.

Ruth Conniff is an Editor-at-Large for The Progressive magazine.