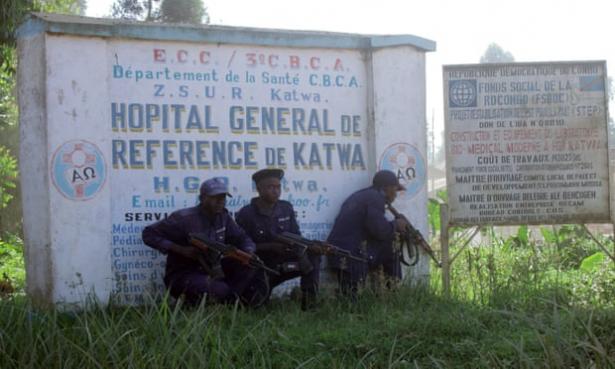 Police guards shelter behind a hospital sign in Butembo the day after an Ebola treatment centre in the city’s Katwa district was attacked by militia, Al-Hadji Kudra Maliro/AP

The number of people killed by the Ebola outbreak in the Democratic Republic of the Congo is expected to exceed 1,000 on Friday, the World Health Organization has warned.

Weekly infections have been rising since late February, with attacks by armed groups and a failure to win community trust undermining the response to the epidemic.

Since the outbreak began in August, 1,510 cases have been recorded in North Kivu and Ituri provinces, according to figures released by the DRC’s ministry of health on Thursday, while 994 people have died of the disease.

An experimental vaccine, thought to be highly effective, is being offered to frontline workers as well as known contacts of Ebola patients and, in turn, their contacts. But this resource-intensive strategy depends on response teams having safe and quick access to affected areas.

In a statement released this week, the World Health Organization warned the security situation remains volatile and “a major impediment” to such work.

There have been 119 attacks on Ebola workers or operations since January, 42 of them directly against health facilities, with 85 health workers wounded or killed.

Reported cases of Ebola underwent a “considerable, although not unexpected rise” following an attack on Butembo hospital last month, in which Dr Richard Valery Mouzoko Kiboung, an epidemiologist, was killed, the WHO added. Each time facilities are attacked, services are wound down, further aggravating the epidemic.

More than half of Ebola infections so far have affected women, and almost three in 10 involve children under 18 years of age, according to available data.

Repeated attacks on health centres, as well as the high number of patients not seeking help from specialist Ebola workers, have prompted calls for agencies to do more to address community mistrust. 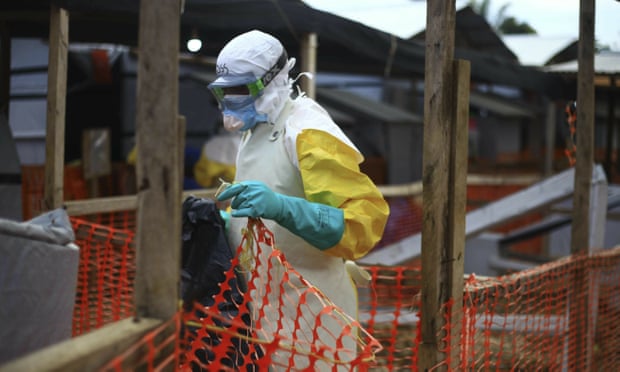 “The sad reality is that community engagement is not at the centre of the government’s and WHO’s strategy for the Ebola response,” said Tamba Emmanuel Danmbi-saa, humanitarian program manager for Oxfam in DRC, who added that far greater emphasis and funding have been allocated to medical aspects of the response.

“We are talking about a context where people have been subjected to continuous armed attacks, people have lost loved ones, properties and are in perpetual situation of displacement.”

The wider needs of communities have received little attention from international donors, said Danmbi-saa: “With Ebola, now they see all these donors, all these actors are coming, inundating their communities and villages – for a threat that is not visible.”

This has contributed to suspicions and rumours about Ebola, not least beliefs that it is a money-making business for agencies, or that the disease does not really exist.

“The Ebola crisis itself has exposed the enormous gaps in the humanitarian response,” added Kimberly Bennett, advocacy manager for the Norwegian Refugee Council in DRC. “There has been an extensive neglect of communities.”

The humanitarian response plan for DRC, which is funded separately to the Ebola response, requires $1.6bn (£1.2bn) but is only 12% funded. Among people who have been displaced by conflict in North Kivu, almost 90% are living on just over a meal a day, according to the Norwegian Refugee Council.

On Thursday, the health ministry announced a further 10 deaths from Ebola, seven of which were community deaths, meaning people had not sought care from an Ebola treatment centre.

Delays in isolating patients and vaccinating contacts at risk, as well as high transmission rates within general health facilities, have all contributed to growing case loads.

WHO teams have met with local residents as part of efforts to empower communities, and the organisation said it has had some success in persuading people to accept care from Ebola teams.

The risk of the disease spreading nationally or across borders remains very high, according to a WHO assessment.

On Friday, 18 humanitarian groups warned that tens of thousands of people have fled to the border with Uganda, following violence in Kamango, Beni territory, near to the Ebola outbreak in North Kivu.

The NGOs, including Oxfam, said they had received reports that people have been prevented from crossing the border at sixteen official crossings. Some are crossing illegally and not being screened before entering Uganda, while others have been forced to return to villages they fled, where there is a risk of further violence.

The WHO has appealed for greater resources to support the Ebola response and said on Friday that there is a funding gap of £54m.

Rebecca Ratcliffe is a reporter for the Guardian's Global Development website

The Guardian is editorially independent, meaning we set our own agenda. Our journalism is free from commercial bias and not influenced by billionaire owners, politicians or shareholders. No one edits our editor. No one steers our opinion. This is important as it enables us to give a voice to those less heard, challenge the powerful and hold them to account. It’s what makes us different to so many others in the media, at a time when factual, honest reporting is critical.

Every contribution we receive from readers like you, big or small, goes directly into funding our journalism. This support enables us to keep working as we do – but we must maintain and build on it for every year to come. Support The Guardian