In 2014 "She's Beautiful When She's Angry", Mary Dore's powerful documentary about the early women's movement, screened around the world. If you missed it, her film now streams on Amazon Prime and Kanopy. "Yes, we have come a long way baby, BUT..." 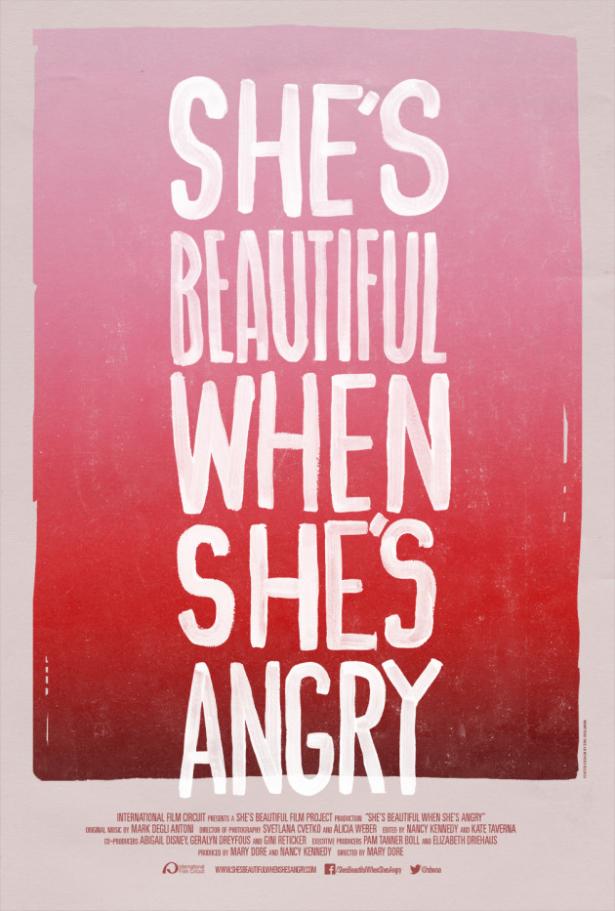 “She’s Beautiful When She’s Angry” is the women’s movement film we’ve been waiting for. We just didn’t know it.

With outrage and humor, the 90-minute documentary brings back the revolution in living color and black-and-white, with torrents of music from the ‘60s and ‘70s. If you were there, it’s the turn-on of reliving the Great Awakening. If you weren’t yet born, hopefully you’ll get what an exciting, life-changing time it was.  And–guess what?–it’s not over.

Producer/director Mary Dore, 63, started the project more than 20 years ago, before her twin sons, now 21, were born. With producer Nancy Kennedy and many, many women and some men, and support, which included Kickstarter funding, the film is finally OUT!

“She’s Beautiful” interweaves interviews with more than 30 women whose writing and actions made a difference. We see them then and hear from them now. In seamless editing, one woman’s thoughts are completed by another. They really were (young) beautiful and angry. They still are feisty, though age has been kinder to some than to others, and they can laugh – appreciatively – at some of their more outrageous younger selves. Any ongoing anger is tempered by realizing we’re in the struggle for a long, long time.

The film’s time frame is 1966 to 1971, when women active in the civil rights and anti-Vietnam War movements applied their analysis and organizing skills to their own lives, sparked by Betty Friedan’s 1963  The Feminine Mystique.

Equal pay for equal work, control of our bodies, and government-supported child care were revolutionary issues igniting women. Fran Beal, co-founder in 1968 of the Black Women’s Liberation Committee of  SNCC (Student Nonviolent Coordinating Committee) and author one year later of Double Jeopardy: To Be Black and Female, speaks of finding the courage to face down black men over charges of genocide when she argued for women’s reproductive freedom. Puerto Rican women actually raised the consciousness of the Young Lords, which defined itself as a revolutionary political party fighting for the liberation of all oppressed people, starting with independence for Puerto Rico.

One of the film’s most memorable moments: D.C. Congresswoman Eleanor Holmes Norton – against footage of the young Eleanor in Afro – states that Nixon’s veto of the childcare bill “was a tragic moment in history. And we’ve been paying for it ever since.” How did this landmark betrayal by a president slip from our collective consciousness?

Women all over the country developed the media savvy to get plenty of coverage, and until now that treasure trove of footage has barely been touched. Dore told Indie Wire: “As a documentary filmmaker, it amazed me that the subject was so neglected. It was arguably the biggest social movement of the last century, yet doesn’t get the respect of other 1960s movements for reasons both complex and very simple: It’s about women.”

There’s chilling footage of covered bodies wheeled away on gurneys, women dead from illegal abortions. Heather Booth, one of the founders of the Chicago Women’s Liberation Union, explains how she started JANE, the underground abortion service, out of her dorm.

There’s footage of women burning their bras outside the Miss America Pageant, taking their cue from the burning of draft cards. (Visual proof that bra burning is not just a collective myth.) More footage of women publicly burning their Bachelor’s Degree diplomas and advanced degrees, with the painful recognition that history majors knew little about women in history, same for art and literature.

Kate Millett was on the cover of Time magazine for her bestselling book Sexual Politics. As the current Kate Millett – on camera with cropped white hair, gleam in eye – says: “We were changing the relationship between male and female. Nothing is more basic than that.”

There is the joy of Rita Mae Brown recounting how lesbians infiltrated the homophobic NOW convention, revealing their Lavender Menace T-shirts: “They didn’t know whether to shit, run or go blind. … It was a lot of fun.” Those were the days. (As part of merchandising the revolution, the “She’s Beautiful” website will sell you a Lavender Menace T-shirt – the perfect Hanukkah gift.)

In the interest of history, Betty Friedan gets her full due. At least in my mind, she’s justly discredited for trying to keep the lesbian taint from NOW. But she was also a helluva organizer. In 1970, she had the vision to call a national women’s strike on the 50th anniversary of women gaining the right to vote. Gutsy women unfurled a giant banner from the Statue of Liberty proclaiming “Women of the World Unite” – televised throughout the U.S. and Europe. Women across the nation rallied to the irresistible slogan “Don’t iron while the strike is hot.”  TV cameras recorded the thousands of women marching down Fifth Avenue – the street jammed with women as far as the eye could see. How could you not be part of this revolution?

The “Our Bodies, Ourselves” collective, still going strong in Boston, took the mystery out of the female reproductive system. Their eponymous book, constantly revived as a living lab with readers’ input, became a women’s Bible, made available worldwide for localizing. (There’s a shot of the Hebrew edition.)

There’s a great black-and-white shot at a NOW convention over the spread legs of a woman ready for speculum self-examination. And footage of women closing down the all-male Senate birth control hearings on the safety of the birth control pill until women were allowed to speak on how doctors were handing out estrogen-packed birth control pills like candy, with no warnings of disastrous side effects.

No surprise, protesting male oppression in a patriarchal society generated pushback. “She’s Beautiful” documents the backlash, with footage of both men and women putting down uppity women.

This was a time when women’s consciousness of our male order society was exploding, with waves and ripples lapping at or engulfing us all. This was the time before feminism took on religion – before Letty Cottin Pogrebin, Ms. editor, started bringing Jewish issues to feminism. And before Lilith magazine was a gleam in anyone’s eye. (Organizing started in 1972 and Lilith’s first issue appeared in 1976.)

“She’s Beautiful” opens with the recent fight for abortion rights in Texas. Some of the film’s final footage is of Nona Willis Aronowitz, daughter of feminist critic and Village Voice writer Ellen Willis. Aronowitz was “down with the word ‘feminism’,” but then there she is in a Slut Walk protesting authorities’ dismissing rape victims as sluts. Same issues with, seemingly, only a minority working for change. Should we be discouraged?

Alix Kates Shulman, author of the iconic 1972 novel Memoirs of an Ex-Prom Queen, whose writing has appeared in Lilith, gives voice to the challenge: “This is a moving target. Freedom is something that is over the horizon and you can’t stop sailing toward it just because you don’t reach it. You just keep going and every generation has another opportunity to take it further.”

She's Beautiful When She is Angry" is currently streaming on Amazon Prime and Kanopy.

Check the film’s excellent website for nationwide screenings and for extensive bios of the 30 women interviewed plus the Our Women, Ourselves Collective. These uppity women are all still fighting the good fight.