Donald Trump seems determined to double down and keep pressing forward on his trade war with China. He promises more and higher tariffs, not realizing that U.S. consumers are the ones paying these taxes - not China's government or corporations.

May 23, 2019 Dean Baker Truthout
Printer friendly
Trump's Trade War With China Is Waged to Make the Rich Richer Published May 23, 2019 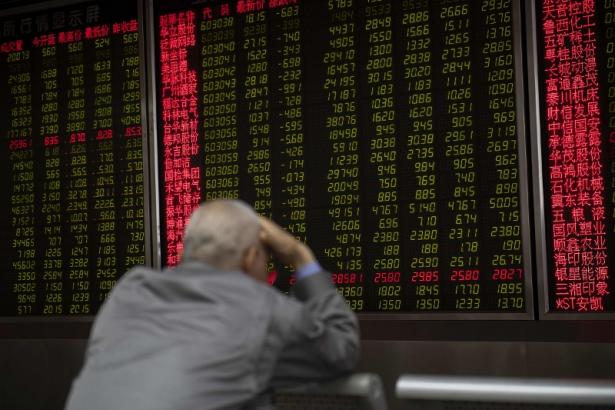 An investor looks at stock price movements on a screen at a securities company in Beijing, China, on May 6, 2019.,credit: Nicolas Asfouri / AFP / Getty Images // Truthout

While tariffs clearly impose a cost on people in the United States, this cost could be justified as a weapon to change a trading partner’s harmful practices. During his campaign, Trump pledged to wage a trade war with China over its currency policy. He said he would declare China a “currency manipulator” on day one of his administration, putting pressure on China to raise the value of its currency against the dollar.

The value of China’s currency matters, since it determines the relative price of goods and services produced in China and the United States. Ordinarily, the currency of a rapidly growing country with a large trade surplus like China would be expected to rise against the currency of a country with a large trade deficit like the United States. However, China’s government intervened in currency markets to keep its currency from rising, thereby keeping down the price of China’s goods and services.

This was ostensibly the behavior that Trump was determined to change in his China trade war. But now that we are in the war, the currency issue has largely disappeared from the conversation. According to the published accounts, the big issue is over China’s respect for the intellectual property claims (i.e., patent and copyrights) of U.S. corporations.

The most bizarre aspect of this turn is that Trump’s demands in this area have the support of economists and commentators across the political spectrum. We repeatedly hear the line that we have to stop China’s theft of “our” intellectual property.

The problem with this argument is that it is not “our” intellectual property that Trump is protecting. After all, very few people have any patents or copyrights that we are worried about China using without compensation.

The intellectual property that Trump and his allies across the political spectrum want to protect belongs to major corporations like Boeing, Pfizer and Microsoft. Their goal is to make China pay more money to get access to technology these companies have developed. That’s great for their profits — sort of like Trump’s tax cut — but does not help the vast majority of people who do not own lots of stock in these companies.

In fact, if China has to pay more money to these corporations for their technology, it is likely to hurt most U.S. workers for several different reasons.

First, if companies like Boeing and General Electric don’t have to worry about being forced to transfer technology to Chinese companies when they outsource to China, they will have more incentive to outsource to China. That’s about as straightforward as it gets.

Second, the more money that China has to pay for the technology of U.S. companies, the less money they have to pay for other exports from the United States. This means that we will have a larger trade deficit in everything other than technology.

In the same vein, this is yet another policy the U.S. government is pursuing that will increase inequality. If we increase the returns to various technology sectors, then we expect that the highly educated people doing this work will see their pay rise relative to everyone else. As is more generally the case, it is not technology that creates this inequality in wages, it is the policy on inequality.

There is an argument that we should not allow China to just take, at no cost, the technology that we spent hundreds of billions of dollars to develop. That is a reasonable argument, but that hardly implies that we need to force them to respect patent and copyright protection.

We need to ensure that China and other countries share in the cost of developing new technologies. There are far more modern and efficient mechanisms than patent monopolies, which are a relic of the medieval guild system. While negotiating sharing mechanisms may be a difficult process, it is no more difficult than preserving the patent system. President Obama likely would have had the Trans-Pacific Partnership completed and approved by Congress before he left office if it had not been for haggling over terms of drug patent-related protections.

It is also important to recognize that we will likely have far more to gain from having access to China’s technology than the other way around. China is already far and away the global leader in clean technologies, with as much installed solar and wind energy as the rest of the world combined, and an electric car industry that now produces as many cars as all other countries put together.

China currently spends roughly the same share of its GDP on research and development as the United States. Its economy is already 25 percent larger than the U.S. economy and will be more than twice as large in less than a decade. Rather than focusing on bottling up U.S. technology, a forward-thinking trade agenda would be focused on ensuring our access to Chinese technology.

Unfortunately, trade policy is not crafted in the national interest, it is crafted with the goal of making the rich richer. This is what Trump’s trade war is all about. And, as is the case with so many other wars, it is about working-class people being forced to sacrifice by paying high tariffs to advance the goals of the rich.