This is a feminist theatrical. A very political play. If you don't want to go to a lecture about what is wrong with how the US government treats women and minorities, it's more interesting to go to a play. 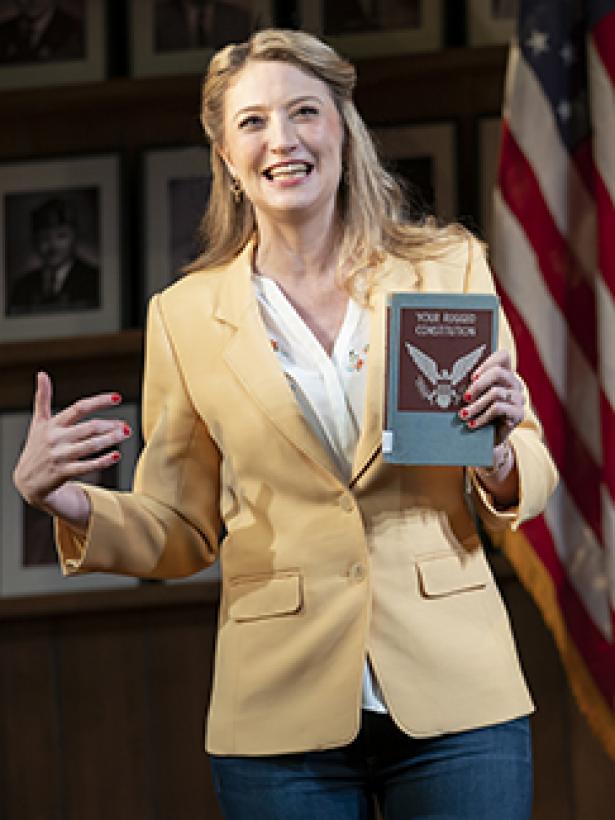 Such as “What the Constitution Means to Me,” Heidi Schreck’s take on how the Constitution is honored in the breach, the copy she carries says “rugged,” but I first misread it as “rigged!” Adult audiences in New York and other liberal enclaves nod their heads, and it’s a good teaching moment for kids. Higher marks for politics than for drama.

Schreck is overwhelmingly sincere and believable.

Pass over her uninteresting kid stuff. She started at 15 giving speeches at American Legion halls about how the Constitution affected her life to earn money for college. She has now at 40 revived those talks with the benefit of a tougher take on American reality. She has great energy as she talks about the 14th and 15th anti-slavery amendments. And about Rosa Parks who in a carefully planned action sat at the front of a Montgomery, Ala, segregated bus and jump-started the modern civil rights movement.

She also talks about the great Bayard Rustin, the brilliant pacifist and strategist who organized Martin Luther King Jr’s 1963 March on Washington. Though she pronounces “Bayard” egregiously wrong. It’s Buy-ard, not Bay-ard. How much did she really know about him? I knew him in the early 1960s as a student volunteering at his 125th Street Harlem office for “The Committee to Defend Martin Luther King and the Struggle for Freedom in the South.”

Full disclosure: I also spent a year 1962-3 as editor of the “Mississippi Free Press” in Jackson and near a decade later became a feminist, in 1970-71 a national vice president of NOW, the National Organization for Women, when I wrote and spoke around the country about feminism.

There’s lots of history in this production which is and should be repeated. In the 1850s, freed slaves could not be citizens. In 1865 men delivered 500 women to Seattle telling them it was paradise for ladies. $300 would get a man a bride. They were indentured servants. She says her relative was kidnapped and bought for $75; she died of melancholia at 36. In the 1880s, the government decided Chinese immigrants were dangerous.

Women continued to be abused by men, violating their constitutional rights to due process, and killed. Sometimes in unsafe abortions, except for rich women, who could always get them as long as they were married and husbands agreed. Until the abortion rights established by the Supreme Court’s Roe v Wade.

You learn about the equal protection clause that Justice Ruth Bader Ginsberg used to argue for equal pay, against women being sexually harassed, assaulted, raped. Schreck’s mother, grandmother and great-grandmother were abused.

Fifty years after the second wave feminist movement, Schreck is saying these things. Why still the big discovery? What has happened in fifty years? The politics are not addressed.

Family abuse continues. In a case where a husband murdered his daughter, police hadn’t enforced a restraining order. And the late, unlamented Supreme Court Justice Scalia backed them up.

Schreck asks, “What does it mean if this document will not protect us from the violence of men?”

Part of the show is a very bright young girl who at different performances debates either side of whether the Constitution should be abolished. Two young students alternate the roles. I saw the excellent articulate and passionate Rosdely Ciprian, 14. The makers, of course, were white men who didn’t appear concerned about the issues the debaters or the author raises.

Then out of left field comes a man at a Legion hall (Mike Iveson) who announces he is gay. I guess Schreck decided that it wasn’t enough to talk about slaves and women, the rights issues when the Constitution was written and the vote was granted to white males. In fact, to white males with property.

But this add-on confuses and diminishes the play, which is largely a monologue and not a dramatic work, as if Schreck felt she had to check a new politically required box. Schreck should have stuck with playing out where the Constitution went wrong. Where the “rugged” Constitution was really “rigged.”

[Lucy Komisar is a theater critic and member of The Drama Desk, the organization of New York theater critics, writers and editors. Her particular interest is the political aspects of theater.]