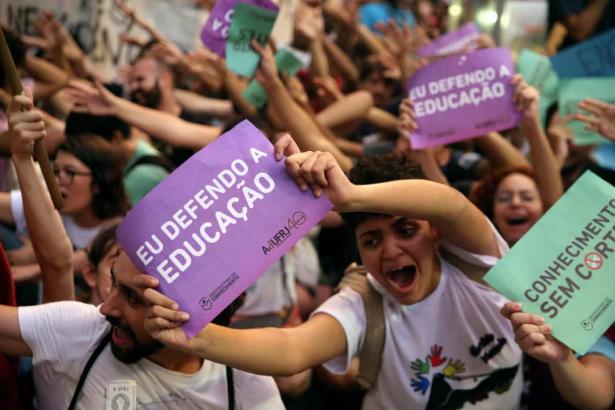 The human rights activist Kameleddine Fekhar had been on a hunger strike since March 31. On May 28, he died in a hospital after his condition had deteriorated. The sorrow and indignation for his only-too-predictable death gave rise to remembrance and protest activities around the world.

Its European parliament vote, achieved separately by Podemos and the United Left in 2014, fell from 18% to 10% (11 seats to 6). In the state elections, where the United Left and Podemos ran separately in some regions, the radical left lost two-thirds of the 99 seats won in 2014, as its average vote fell from 13.7% to 6.7%. In Extremadura, it managed to hold four of the six seats won in 2015.

The Sudanese Professionals Association is deeming the events a “bloody massacre”, and has called for a “total civil disobedience”, and vowed “we will not retreat”.

Hundreds of thousands of students, academics and teachers have taken to the streets of Brazil for their latest mass protest against far-right president Jair Bolsonaro’s assault on education.

In southern Mexico, a multi-ethnic network of towns has halted the construction of a mega-dam. Now they are organizing to manage their own natural resources and revitalize their culture as native water protectors.

The Pakistan army shot and killed at least 13 civilians and injured dozens more at a sit-in staged by the Pashtun Tahaffuz Movement (Pashtun Defence Movement or PTM), in the tribal North Waziristan district of the Khyber-Pakhtunkhwa (KP) province.

Thousands participated in the national strike against the privatisation of health and education. The mobilizations channeled the widespread anger against the government of Juan Orlando Hernández.

Last week’s elections produced grim results for the Left across most of the continent. But in Belgium, the Workers’ Party made a historic breakthrough.