More than 120 multiemployer pension funds—plans that cover workers who regularly work for different employers, largely in trucking, mining, construction, and entertainment—are considered in danger of insolvency. They cover about 1.3 million workers. 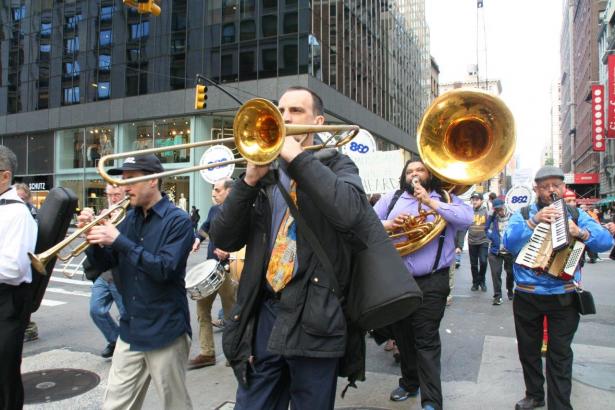 The American Federation of Musicians and Employers’ Pension Fund is in “critical and declining status.”,LaborPress

Retired musicians are joining truckers and miners in singing the financial blues. The American Federation of Musicians and Employers’ Pension Fund announced May 24, that it is applying to the Treasury Department to reduce benefits on the grounds that it has entered “critical and declining” status.

That “means the Fund is projected to run out of money to pay benefits within 20 years,” the message to members said. “Although reducing benefits will be painful, the Trustees have decided to seek permission to do so because running out of money would leave all participants with virtually no benefits in the future.”

“We are in this position because of the combination of investment losses during the Great Recession and rising benefit payments that increasingly exceed contributions,” the message said. The AFM pension fund, it said in a statement to LaborPress, was 97% funded on March 31, 2008, but only 63% funded one year later. Investment returns have been strong overall since then, it added, but “those returns were based on a much smaller amount of assets.”

In the year ending in March 2018, the fund lost more than $100 million, receiving $68 million in contributions and paying out $171 million in benefits. Those continuing losses, it said, are reducing its assets to the point where its actuaries project that by 2034, it would have to earn over a 30% return just to avoid losing more.

“There is no practical way that investment returns or contribution increases will be able to close this gap,” it says.

The fund will apply for the benefit reductions under the Multiemployer Pension Reform Act of 2014, which allows it to ask the Treasury Department to approve cuts of an amount sufficient to avoid insolvency. It said it would file the application before the end of the year.

More than 120 multiemployer pension funds—plans that cover workers who regularly work for different employers, largely in trucking, mining, construction, and entertainment—are considered in danger of insolvency. They cover about 1.3 million workers. About 25 have already applied for cuts.

In trucking and mining, industry changes that reduced the number of current workers paying into the plans have exacerbated the problems caused by an aging workforce and losses from the Great Recession. The Teamsters Central States Pension Fund, whose more than 400,000 participants account for close to one-third of those in endangered multiemployer plans, is paying benefits to almost five retirees for every active worker, as the deregulation of trucking in the 1980s slashed union labor’s share of the industry. The United Mine Workers of America’s 1974 Pension Plan, with more than 100,000 participants, is imperiled by the number of mines closing or going bankrupt.

The AFM fund says that despite the recession and the Internet’s effect on the music business, annual employer contributions increased over the past 15 years. With income from digital streaming, they’ve grown by about 4% per year over the past five years.

Its core problem is demographic. “The AFM-EPF is a mature plan, with the retiree population having grown faster than the active population,” it says. As of March 31, 2018, it had 20,602 active participants contributing, 15,328 retirees and others receiving benefits, and 14,177 “deferred vested,” who are not currently working as musicians but would be eligible for pensions when they retire.

The fund said it could not predict how much they will be reduced, but that it likely won’t happen until late next year or early 2021, because of the time the application process takes. Fund participants will vote on whether to accept the reductions proposed, but a “no” vote by a majority of all participants, not just those who cast ballots, is needed to reject them. The 2014 law also requires the Treasury Department to override a rejection if the plan is considered “systemically important,” that its going insolvent would endanger the entire multiemployer system. The federal Pension Benefit Guaranty Corporation, which pays reduced benefits to retirees in insolvent plans, is projected to run out of money by 2025.

The fund’s actuaries estimate that almost 60% of beneficiaries will be “completely protected from benefit reductions.” The Multiemployer Pension Reform Act prohibits cutting benefits for people who are 80 or older or disabled. It also limits on how much they can be reduced for retirees between 75 and 79, and, as long as the PBGC is solvent, no one can get less than 110% of what it is supposed to pay if the fund went under.

The fund’s trustees expect that they will eliminate extra benefits paid to workers who retired before age 65, however.

It says it’s “continuing to actively push for legislation from Congress that will provide the necessary assistance.” The AFM last year lobbied for the Butch Lewis Act, a bill sponsored by Sen. Sherrod Brown (D-Ohio) that would have created a federal agency to arrange 30-year loans intended to enable troubled multiemployer plans to salvage themselves. But it drew minimal Republican support and did not make it out of committee in either house. A 16-member House-Senate committee that was created to craft a solution failed to agree on one.

Rep. Richard Neal (D-Mass.), lead sponsor of the Butch Lewis Act’s House version last year, reintroduced it in January in his first legislative action upon becoming chair of the Ways and Means Committee. Called the Rehabilitation for Multiemployer Pensions Act, it has not yet gotten a committee hearing.