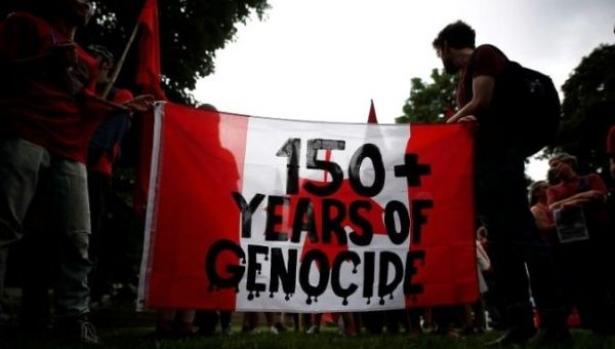 There are approximately 1.6 million Indigenous people in Canada., REUTERS

A leaked 'Reclaiming Power and Place' 1,200-page report, which was the result of a national inquiry centered on investigating the epidemic of missing and murdered Indigenous women in Canada, officially recognizes the deaths as a "Canadian genocide."

"The national inquiry's findings support characterizing these acts, including violence against Indigenous women, girls and 2SLGBTQQIA people, as genocide," the report said. The US$67-million inquiry blames "state actions and inactions rooted in colonialism and colonial ideologies" for the thousands of Indigenous women and girls who were murdered or disappeared across Canada.

"It took 40 years to get to this present moment and only because Indigenous women have been on the ground making noise about this," advocate Robyn Bourgeois told the BBC.

"The fact that First Nations, Inuit, and Métis peoples are still here and that the population is growing should not discount the charge of genocide," the document says and adds that "due to the gravity of this issue," the inquiry is preparing a "supplementary report on the Canadian genocide of Indigenous peoples according to the legal definition of genocide."

Former Manitoba Keewatinowi Okimakanak Grand Chief Sheila North added that she “was almost a statistic” when she moved from a reserve into the city.

“The common thread of all the women and girls I talked to (is) every single time there was always a problem with police, some sort of feeling of being disregarded, disrespected, not believed,” North told CTV News.

The statements of more than 2,000 witnesses - including survivors of violence and family members of missing women - were documented over the past two-and-a-half years in two dozen hearings.

"Out of respect for all those invested in the process, and most particularly the family members and survivors of violence who courageously shared their Truths over two years of public hearings and statement gatherings, the National Inquiry will proceed as planned to present its Final Report on Monday, June 3 at a solemn national ceremony to honor the missing and murdered," a statement from the inquiry said after the leak.

Office of Crown-Indigenous Relations Minister Carolyn Bennett also issued a statement saying the minister would not comment on the report's findings.

"Out of respect for the independent National Inquiry and the families, we won't comment on the details of the final report before then (Monday)."

The federal government has stated that about 1,200 aboriginal women – a figure disputed by activists - have been murdered or gone missing in Canada since 1980.

There are approximately 1.6 million Indigenous people in the North American country.

PM Trudeau, senior cabinet officials, Indigenous leaders and the families of victims are all expected at the Museum of History in Gatineau, Quebec for the release of the report June 3, 2019.