Think US Media Won't Help Lead Nation Into War With Iran Based on Flimsy or False Intelligence? Looks Like They Already Are

"Do U.S. reporters, anchors, and editors really want more Middle Eastern blood on their hands? If not, they need to fix their rather credulous and increasingly hawkish coverage of Iran—and fix it fast." 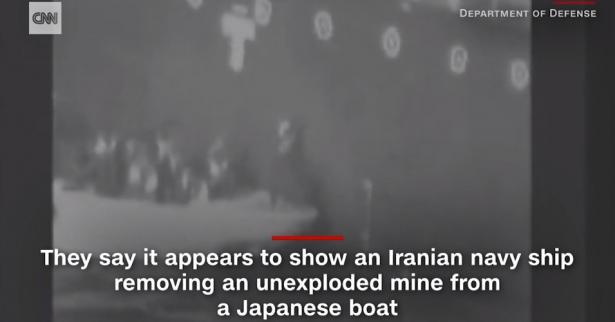 If there were any lingering hopes that the corporate media learned from its role in perpetuating the lies that led to the 2003 invasion of Iraq and would never again help start a Middle East war on the basis of false or flimsy evidence, the headlines that blared across the front pages of major U.S. news websites Thursday night indicated that such hopes were badly misplaced.

The U.S. military late Thursday released blurry, black-and-white video footage that it claimed—without any underlying analysis or further details—showed an Iranian patrol boat removing an unexploded limpet mine from the Japanese-owned Kokuka Courageous, one of the oil tankers damaged in attacks in the Gulf of Oman.

Iran has denied any involvement in the attacks, and Yutaka Katada—the owner of the Kokuka Courageous—contradicted the Trump administration's account during a press conference on Friday.

"Our crew said that the ship was attacked by a flying object," Katada said. "I do not think there was a time bomb or an object attached to the side of the ship."

Independent critics were quick to call for extreme skepticism in the face of U.S. government claims, given the quality of the "evidence" and the warmongering track records of those presenting it.

But the media displayed no such caution.

Just taking a random sample of screenshots after the news broke Thursday night, major outlets largely did the Pentagon's dirty work by posting uncritical headlines that took the claims at face value.

The Washington Post used the word "purported" in its headline, but erroneously reported that the video was taken "before" the explosion on the vessel, not after. The headline was later changed, but was made no more critical of the military's claim:

In the New York Times rendition—which appeared prominently on their homepage—the claim of what the U.S. military intelligence "believed" the video to show was framed with the more objective-sounding and vague phrase "what analysts believed":

Like the Guardian, Politico made no attempt to go beyond the "U.S. says" framework:

Fox News, of course, went further than most by characterizing the Pentagon video as a "major clue" to who was behind the alleged attack:

CNN, meanwhile—specifically in the subhead of the headline story that appeared at the top of their page late Thursday night—took the military's claim of what the video showed as actual fact:

The Hill's version, similar to the error made by the Post, reported that the video was taken before the explosion—a detail likely to leave readers much more suspicious of Iran's involvement than if one of its vessels had approached the ship in the wake of the incident:

Though no single headline could be construed as explicit pro-Pentagon propaganda on its own, the uncritical nature of the coverage and ensuing echo chamber effect—or what is sometimes referred to as "propaganda reinforcement"—is one of the ways that the U.S. government and its intelligence agencies are empowered to turn a flimsy claim into a pervasive and widely-accepted fact.

In a blog post on Friday, historian and Middle East expert Juan Cole wrote that the Trump administration's narrative that Iranians were removing an unexploded mine from the damaged oil tanker "doesn't make any sense at all" and said the video footage released by the U.S. "needs to be carefully analyzed" before any conclusions are drawn.

"[Secretary of State Mike] Pompeo alleged that only the Iranians had the expertise to deploy these mines," Cole wrote. "We heard this crock for 8.5 years in Iraq—all shaped charges had to be Iran-backed, even those of al-Qaeda, because Iraqis didn't have the expertise.... Sure. Had to be Iran, helping those hyper-Sunni al-Qaeda. Very likely story."

On Twitter, Sina Toossi, research associate at the National Iranian American Council, echoed Cole's call for scepticism and an investigation.

"What we need is an impartial investigation," Toossi wrote, "and to be highly skeptical of claims and intel skepticism and an investigation.assessments from Bolton/Pompeo."

In a column published last month as the U.S. aggressively escalated military tensions with Iran and pushed the two nations to the brink of all-out war, The Intercept's Mehdi Hasan asked a straightforward question that remains relevant in the present: "Do U.S. reporters, anchors, and editors really want more Middle Eastern blood on their hands?"

"If not," Hasan wrote, "they need to fix their rather credulous and increasingly hawkish coverage of Iran and the Trump administration—and fix it fast."