Metro New York Labor Communications Council held its annual convention on May 10 at IBT Local 237. The Communicators of the Year award was presented to the Portside Labor collective. Portside Labor has been a vital resource for the labor community.

It is an honor today to host the moderators of Portside.

I think it is fair to say that you have distinguished yourselves as the preeminent moderators and curators of progressive information and ideas in this country.

Your efforts demonstrate a mastery of a broad range of topics: in politics, science, arts, history. an extraordinary array of subject matter.

It is a testament to your knowledge and commitment that you staked out this place in the dizzying world of the Internet.

It is a dizzying world, which speaks volumes to your accomplishment.

You took a technology that can easily overwhelm and you harnessed it, and persevered, for the good of us all.   Thank you.

It would be a mistake to judge these times in any but harsh and threatening terms. Indeed, what you choose for us to read supports these conclusions.

But you manage to balance a critique of society with something else.

Permit me here to quote briefly from a posting that appeared on your site this week, under the title, "Why the Labor Movement has Failed- and How to Fix it."

Over the past four decades, we have witnessed the near total destruction of [the] promise of worker rempowerment... The result today is a staggeringly unjust global economy in which just eight men own as much wealth as half the world's population. We now face a perverse concentration of wealth among the super rich, pervasive financialization of the economy, an upsurge of low-wage and precarious work, and the heightened power of monopolistic tech firms.."

And now comes the punch line:

Despite this grim turn of labor history, there are many new reasons for hope.  Interest in unions is surging, and worker organizing is gaining ground in influential sectors... Young people have begun to question some of the central assumptions of capitalism and have revived interest in democratic socialism.. The Left is alive with creative energy not seen in many decades."

I know there is hope because of what I read on Portside each day.

That's no small accomplishment in this world-a persuasive, radical critique of society that nonetheless imparts optimism.

And it is for these reasons - your commitment to a progressive world governed by the working class and to critical analysis and indispensable information, and the hard work you demonstrate in moderating an exceptional array of articles, day in and day out, and, yes, for the hope you inspire through this commitment, and for the very ideas you expound - that the Metro New York Labor Communications Council awards you our highest honor:

Thank You on behalf of Portside Labor

Welcome and thank you.  Being awarded Communicators of the Year by the Metro New York Labor Communications Council is a tremendous honor which we value greatly because we value the labor movement and those who give of themselves to make this a better world.  Working people who take part in the life of their unions and the communities in which they live, be they rank-and-file activists, shop stewards, health & safety, grievance, bargaining, employee assistance, committee members up to elected leadership and union staff -- that is to say, the labor movement in its fullness - is composed of individuals who have different often conflicting opinions, views, perspectives on life within a broadly shared common belief in peace, social justice and a democracy of the people.  The same can be said of the labor left, which is itself part of the wider trade union movement, and is similarly divided in views and perspectives, while sharing values and a commitment to today and tomorrow.

Portside aims to reflect that diversity and shared sensibility.  Portside began in 2000, Portside Labor in 2008.  For those unfamiliar with who we are, I will read briefly from our statement that defines how we see ourselves:

"Portside is a community of people on the left and an alternative medium of communication. While the commercial media are becoming steadily more monopolized by the same giant economic interests that control finance and industry, we are dedicated to realizing the democratic potential of the Internet and other new communications technologies. We are part of the movement to create an alternative information infrastructure. We are beholden to no corporate interests.

The moderators believe that a new and more just social order must be imagined before it can be built. We intend Portside as a space that fosters such imagining. We aim to be a catalyst to imagination by sharing dreams and experiences, political programs and struggles, which are the raw material of imagination. We believe that we are all emboldened and reinforced by knowing about the real efforts, all around the globe, to achieve a better world.

The moderators all think we can do better than capitalism -- and had better do better, if we and our children are going to have a future -- without proposing a neat blueprint for the future or a well-drawn roadmap to it. We believe that the search for alternatives must be based on working class solidarity and on principled opposition to all forms of exploitation, racism, sexism, homophobia and ethnocentrism. We seek a society based on democracy, social and economic justice, and racial and gender equality. We believe in globalization from below, in development of international ties in the interest of peace and social progress. We know that our future depends on developing and implementing new models of sustainable social reproduction and guardianship of nature..."

Those words guide our practice.  Alongside regular Portside posts on political, cultural, scientific subjects, each day myself or one of the other labor moderators selects and reposts an article we believe will be of particular relevance to unionists - chosen from a broad array of publications from the US and abroad.

Sometimes it is important for the official AFL-CIO or international union perspective to be heard, sometimes a critical perspective from within labor's ranks needs to be aired.  A moderator may choose an article on an ongoing strike in need of solidarity, an article about a victory or a defeat, an analytical article about our movement or more something more general about working-class life and politics.  In every case, we seek to emphasize on or the other of the three pillars of our movement: agitation, education, organization

To give a sense of what this means, I note the following titles and sources of some recent postings:

This is a labor of love - a labor of commitment as none of us are paid for what we do, no more than we are paid when we join a picket line or rally, canvass during an election, take part or organize a community meeting around a pressing injustice.  But here I want conclude with one point - the working-class movement is rooted in democracy in the genuine sense of the word; multiple ideas searching for a way to express solidarity in action.

Labor has advanced every day we are true to that democratic vision - whether in the early days of the Knights of Labor and the AFL, in the creation and building of the IWW, in the rise of the CIO, and in the outburst of social activism during the upheavals of the 1960s and 70s as expressed in the anti-war, black, women's, Chicano, Puerto Rican, Asian-American and other movements of the era which led to a rank-and-file upsurge and a wave of organizing.  And labor has stagnated every time diverse ideas were pushed back into a box of pre-determined ideas and opinions.

To the extent we generate respectful debate based on multiple opinions during today's time of ferment, resistance and striving, is the extent to which we will assist today's movement to win fundamental change, and give meaning to our conviction that a better world is necessary and possible.

We take this honor as a charge to continue along that path - and so we shall.

I conclude in passing with a tribute to Larry Hanley, the Amalgamated Transit Union president who passed away suddenly and too soon.  Four years ago marked the 100th anniversary of Joe Hill's execution.  The Metro DC Labor Council hosted a program of music by and about Hill as part of its monthly Bread and Roses program.  Hanley brought about 25 or so rank-and-file members of the ATU who were attending a union training program to attend, most had never heard of Hill, let alone heard his music performed, and so came away from the evening with something critical to the labor movement that no class or lecture can ever express.

That something is the spirit that guides our work and so I will end with lyrics from a song Hill wrote while in a Utah prison;

Men and Women side by side

We will crush the greedy shirkers

For united we are standing

But divided we will fall,

Let this be our understanding:

All for One and One for All 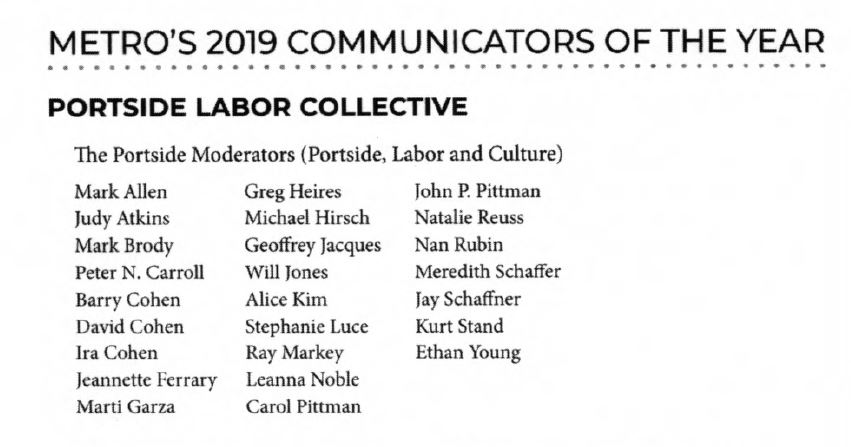 Additional Remarks on behalf of Portside

Portside has grown and is respected and widely read and referenced because it presents information to enable the left and labor movement to help advance people's struggles. It presents information and opinions that are broader than any one particular movement or organization. Portside does not have one "line," or only one view of the many-faceted issues before our people and the world.

The original founding moderators of Portside came out of a part of the socialist left, and like many who had similar backgrounds, they were part of that left experience which rejected the notion that there is "only one answer."

Life is more complicated than that.

Portside came into being at the end of the 90s, amid the then-information-technological revolution. Portside is one of many vehicles that people use to obtain information, form opinions and guide their actions and activities. It is not the only such vehicle. The days of only one source of information and news are behind us. Some on the left still need to learn that lesson. I also think that some (or many) in the labor movement also need to key in on this.

Each moderator of Portside is responsible for the posts on the day on which they moderate. We have a different moderator for each day of the week for Portside, Portside Labor and Portside Culture. Moderators do not submit what they plan on posting to an editorial board. We are an all-volunteer operation, where most of our moderators still hold down regular jobs. There is no time to submit and get feed-back from an editorial board.

There are broad agreements amongst us, but as with any assembled grouping on the left or the left in labor, we each have our own experiences, backgrounds, politics and conclusions. As some of you have told me, they recognize that not all of us agree on everything. If we did, I don't think Portside would be getting today's award. You have come to expect Portside to be a source of varied left and labor information, not to be sanitized by any one view. That is what we feel makes Portside so valuable.

Thank you for using Portside and appreciating its work, and that of Portside Labor, Portside Culture and Portside.

Other Portside moderators that were present and participated in the New York Metro Labor Communications Council Awards ceremony were: 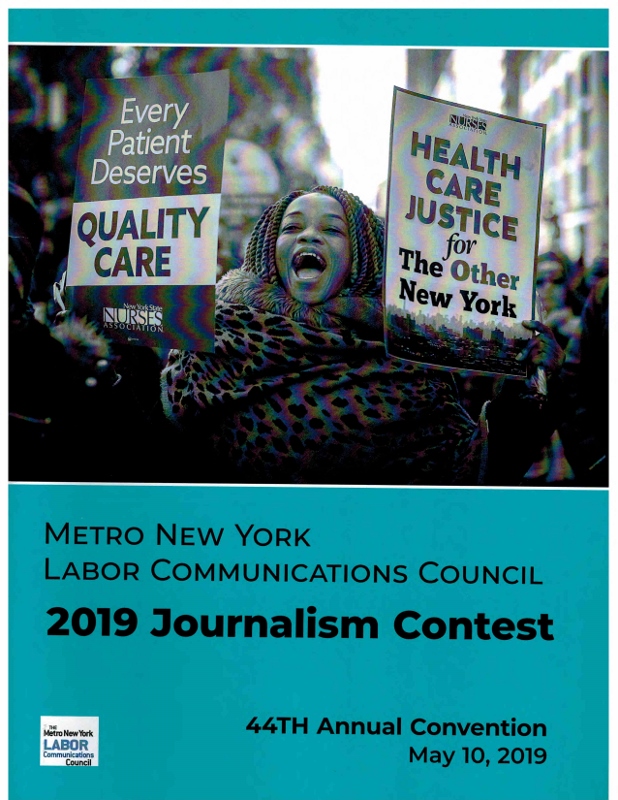