Confronting Politicians With the Reality of Poverty

The Poor People’s Campaign gathered this week in Washington, demanding change from both presidential candidates and members of Congress 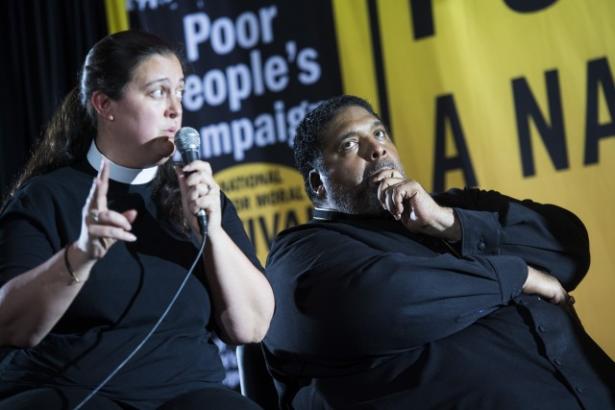 In the gym on the campus of Washington, D.C.’s Trinity Washington University, with bleachers pushed to the side to make room for more than 1,000 attendees, a banner hung from the balcony reading, “Fight poverty, not the poor.” Just outside, more banners and posters, declaring the immorality of poverty, papered the walls of the lobby.

This was the setting for the three-day Moral Action Congress of the Poor People’s Campaign, which opened Monday with nine Democratic presidential candidates discussing their plans to address economic inequality, and ended Wednesday as a handful of leaders from the Campaign addressed the House Budget Committee in a hearing on poverty in the United States. Also on Monday, the Campaign released a “moral budget,” published in partnership with the Institute for Policy Studies, which spells out how the federal government would pay for their demands, which include a higher minimum wage and investments in social welfare programs like health care. Spoiler: The budget includes large cuts to defense spending and high taxes on the wealthy, which together would raise more than a trillion dollars.

The Campaign, chaired by the Rev. Dr. William J. Barber II and the Rev. Dr. Liz Theoharis, was born last year, coinciding with the 50th anniversary of Martin Luther King Jr.’s original Poor People’s Campaign. At that time, it released an agenda highlighting demands to improve the lives of low-income people; this week’s new budget pays for them.

Poor people, of course, tend not to be represented in Washington, and poverty by itself isn’t an issue that most candidates talk about. (Though in recent years, we have seen a partial turn away from that trend, thanks to the likes of “anti-establishment” candidates like Bernie Sanders.)

But in the years since the 1960s, “we have virtually eliminated discussion of poverty,” Barber said. “Not one debate [in 2016] focused an hour on poverty.” That was why the Campaign had invited all the Democratic candidates to speak, he explained. The Campaign also sent invitations to President Trump and the Republican National Committee (RNC) but did not receive a response.

Not surprisingly, Sanders and Elizabeth Warren were among the nine candidates who spoke at the forum. Kamala Harris and Joe Biden also spoke (this was Biden’s first appearance with the other candidates), as did some lesser-known candidates—Andrew Yang, Michael Bennet, Marianne Williamson, Eric Swalwell, and Wayne Messam—who were clearly happy to appear on the same stage as candidates polling higher than 2 percent.

Each candidate, under pressure from Barber or Theoharis, agreed that they would push for a debate centering on poverty. Candidates were also specifically asked questions by low-income representatives of the campaign.

On Wednesday morning, Barber and Theoharis and four other members of the Poor People’s Campaign testified in front of the House Budget Committee. Republicans also invited their own witnesses, two pastors who had experienced poverty. The testimonies from the Campaign focused on the material realities of living in poverty, while Republicans and their invited witnesses chose not to address these topics, but instead extolled hard work, individual responsibility, and Christianity.

“The scriptures that I read, one of the problems that we’ve got in this country, it’s not a head problem, folks, it’s a heart problem,” Republican Representative Bill Johnson of Ohio said. (At this point in the video broadcast, an audible “ugh” can be heard in the hearing room.) “I don’t find anywhere in the scripture where Jesus said that it was Caesar’s job to feed the poor and to clothe the widows and to take care of the orphans. He said it was the church’s.”

A handful of Republican legislators also pointed to their own experiences as children, mostly arguing that hard work and education pulled their families out of poverty.

“It’s almost as though people are afraid to talk to poor people who are challenging the system,” Barber said in the hearing, as Republican politicians only asked questions of their invited guests. That’s because, Barber continued, “when people fail, [many politicians say] ‘We want to love you and work hard,’” Barber continued. “When businesses fail, [it’s] ‘Let’s find the money.’”

At the end of the congress, Barber announced a new Poor People’s Campaign march on Washington next June.

Kalena Thomhave is a writing fellow at The American Prospect. @kalenasthom Articles by Kalen Thomhave RSS

Used with the permission. © The American Prospect, Prospect.org, 2019. All rights reserved.