What are some of the barriers to minority candidates running for/winning office? 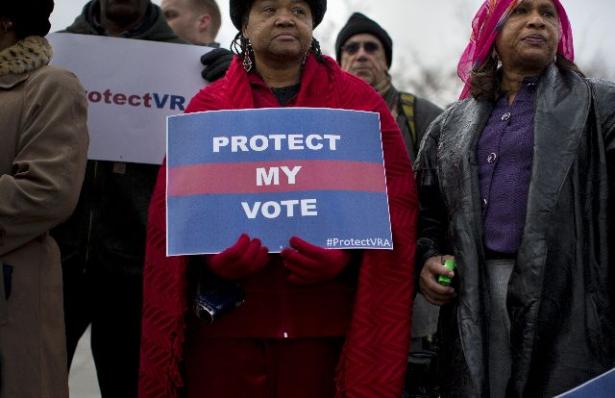 People waited outside the Supreme Court in 2013 to listen to the Shelby County, Ala. v. Holder voting rights case., AP Photo/Evan Vucci 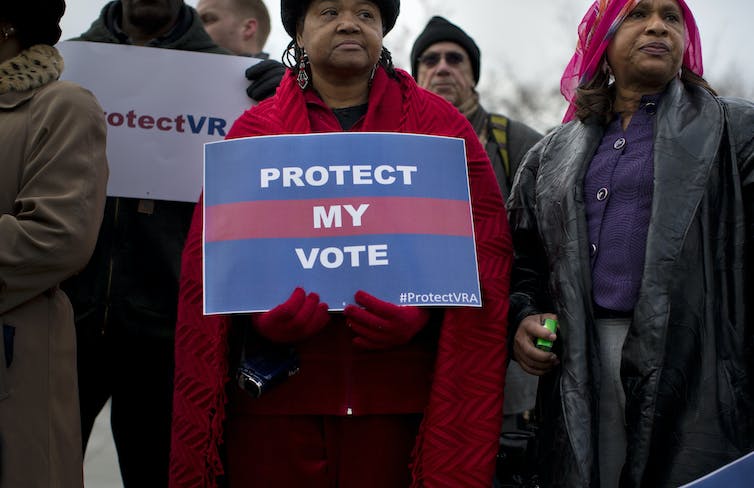 People waited outside the Supreme Court in 2013 to listen to the Shelby County, Ala. v. Holder voting rights case. AP Photo/Evan Vucci

Mississippi is home to the highest percentage of African Americans of any state in the country.

And yet, Mississippi hasn’t elected an African American candidate to statewide office since 1890.

John Stuart Mill wrote about “the tyranny of the majority” – the idea that an electoral majority will use the political structure to impose its will on the minority population – in his essay “On Liberty” in 1859.

Mill could have used the way Mississippi chooses statewide offices as the symbol of this tyranny. Mississippi requires winners to receive more than 50% of the votes. When no one receives a majority, the Mississippi legislature, not the voters, chooses the winner.

In late May 2019, four African American Mississippians sued in federal court to end this practice, which they say was designed to keep black candidates from winning.

“The scheme has its basis in racism – an 1890 post-Reconstruction attempt to keep African Americans out of statewide office,” said former U.S. Attorney General Eric Holder, the chairman of the National Democratic Redistricting Committee, a group backing the lawsuit.

As a professor of political science who has written about African Americans seeking elected office, I’m especially interested in barriers to minority candidates running for office.

Let’s look at what happens when candidates have to win a majority of votes, or compete in large geographical areas – not just in Mississippi, but around the country.

One interesting example is Georgia.

My co-author, Seth Golden, recently presented his research on county elections in Georgia at an undergraduate political science research symposium. His work shows that at-large districts – where all or most candidates must run city or countywide – were statistically unlikely to provide African American representation.

In 2013, Ariel Hart, Jeff Ernsthausen and David Wickert, reporters for the Atlanta Journal-Constitution looked at how at-large districts affected minority representation in Georgia. They found that “more than 100 counties elect at least one commissioner at large, meaning by countywide vote. Sixty percent of voters in those at-large contests are white; 92 percent of commissioners who hold the seats are white.”

Our work and that of others shows that these at-large districts make it harder for minority groups to gain power because it takes more money and organization to win them.

The problem isn’t limited to just Mississippi, Georgia or even to the state level. Many cities and counties – including some in California – require candidates to carry a majority of the district in order to win.

Even when minorities make up nearly 40% of the electorate, an at-large district can easily produce an all-white council.

In fact, the at-large district had been the subject of a landmark Supreme Court case. In 1976, Wiley Bolden, an African American, sued Mobile, Alabama, and its at-large district system which was enacted in 1911. Bolden argued that while 36.2% of the city was black, nobody on the city commission was black, which he said was a violation of the Voting Rights Act of 1965.

Though the Federal District Court and the Court of Appeals agreed with Bolden, the Supreme Court overturned their decision in City of Mobile v. Bolden. By a 6-3 margin, the justices ruled that the 15th Amendment did not give black candidates the right to be elected, and “only purposefully discriminatory denials of the freedom to vote on the basis of race demanded constitutional remedies.”

In other words, the court found that at-large districts were not necessarily unconstitutional.

The outrage was bipartisan. The NAACP lobbied Congress heavily. Republican Sen. Bob Dole led the charge to amend the Voting Rights Act to ban discriminatory laws even if the accuser could not prove the intent of a law was to discriminate against a minority group.

In the 1980s, the city of Mobile changed their election laws to more closely resemble a single member district system. Single member districts are those that elect just one representative from a particular part of a city or state. Sure enough, leaders in Mobile became more diverse after the change.

In that case, the judges ruled that Section 4 of the Voting Rights Act, which required the federal government to sign off on electoral changes in an effort to reduce racial discrimination in several states where past problems occurred was unconstitutional. In other words, localities could maintain an at-large district or switch to one if they choose to do so.

Professors Jessica Trounstine of Princeton University and Melody E. Valdini from Portland State University found that single-member districts were better at increasing minority representation on city councils, county commissions and other local legislative bodies, especially where minorities are concentrated in those districts.

In Jones County in North Carolina, at-large districts kept the African American minority from winning a single seat for more than 20 years even though they made up 30% of the population. When the rules allowed single-member district elections in 2018, two African Americans were elected to the Jones County Commission.

Our findings support Trounstine and Valdini’s conclusions. For those single-member district counties in Georgia that the AJC researched, we found that the percentage of African American voters is a lot closer to equitable representation in local legislative bodies.

While racial gerrymandering and voter laws are being targeted for disenfranchising voters, it’s clear that at-large districts and states requiring candidates to get a majority of votes have the same effect, and will likely be the next battleground in promoting minority rights.

Back in 1859, Mill famously asked how America could live with a huge inconsistency at its heart: a proclamation of liberty for all co-existing with the institution of slavery? Slavery ended not long after, but the tyranny of the majority still takes many forms.